Theatre for the Very Young
Varied and Complex 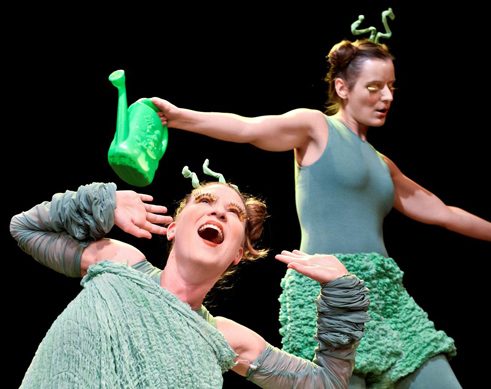 For almost ten years now German theatre-makers for a young audience have been conquering a new area of competence and a new audience group. In this time theatre has developed art for children in the pre-narrative phase, that is, for children under four years of age.

For almost ten years now German theatre-makers for a young audience have been conquering a new area of competence and a new audience group. In this time theatre has developed art for children in the pre-narrative phase, that is, for children under four years of age. Performances in theatre are offered for child caregivers and audiences as young as babies. If initially the question about theatre for the very young was determined by debate, this has now given way to a nuanced aesthetic discussion.

The foundation of this development is the recognition that the right to participation in art is valid for people of all age groups, though until now children less than three years of age have been excluded from the experience of theatre. This exclusion rested on the experience that a very young audience was unable to understand the rules of representative civic theatre.

The development of different theatre forms for the very young began in September 2005 with a symposium in Hamm. Following this up was the inauguration of the project of the German Children’s and Young People’s Theatre Centre Theater von Anfang an! (i.e. Theatre from the Beginning!), a two-year research project, comprising four theatres (Theatre of the Young Generation in Dresden, Schnawwl at the Young Mannheim National Theatre, the Helios Theater in Hamm and Theater SiebenSchuh in Berlin), whose goal was to develop theatre forms for the very young audience. To mark the end of the project, the first Festival of Theatre for the Very Young was held in November 2008 at the Theatre of the Young Generation in Dresden. Not only the theatres that had participated in the project met here; five other theatres that in the same period had taken convincing paths of artistic development also presented their work.


Theatre for the very young in Germany is today as varied and complex as are other forms of art. With striking frequency, productions take place as ensemble productions with a high degree of participation in authorship on the part of the actors and in close proximity to the young audience. During the rehearsal process either the artists regularly visit with the target group or vice versa. Individual theatres also rehearse in day nurseries, so that their audience’s surroundings flow directly into the work.


Axioms for successful productions have crystallized from the artistic research of the past ten years. Small spaces promote the encounter with adult artists; the audience usually consists in less than fifty members. The theatrical communication is direct and fragile. Performance areas and auditorium are little if at all separated, the boundaries are often abolished or changed in the course of a play. The artificial worlds are visible as art spaces. The actors play neither a character nor a role, but create characters that specify themes and set up rules for the performance. The perception of and direct, flexible, rarely verbal communication with the young audience is an essential component of this kind of theatre. Linear narratives are absent, but not dramaturgical elements such as tension, turning-points and dénouements. The dramaturgy of a production for the very young, that is, its whole structure, is subject to the particular category of time. In every presentation the actors find a common breath with the audience; only in this accord can the performance take place. The dominance of the stage in relation to the audience is here unthinkable. For inexperienced organizers it may be difficult, but the duration of a theatre piece for the very young can vary up to forty per cent.


Nothing that is part of their lives is withheld from the young audience. The Young Generation Theatre in Dresden, for example, has since 2008 performed for them <i>Funkeldunkel Lichtgedicht</i> (i.e. Sparkledark Light Poem), an exploration of light, shadow and darkness. An upcoming premier for an audience of two-years-olds and up will be Boing! by the choreographer Barbara Fuchs, a dance piece about pushing, falling and standing up again. And the Theater o.N. offers fliegen&amp;fallen (i.e. flying&falling), a dance production for a very young audience. The experienced and successful duo florschütz&dönnert perform Rawums!, a piece about gravity, Ssst! one about disappearing, and also invite the youngsters to a poetic circus.

The Helios Theater in Hamm focuses on the exploration of materials. Their plays bear titles such as Holzklopfen (i.e. Knocking Wood), Spuren (i.e. traces) (in sand and snippets of farewell and welcome), Am Faden entlang (i.e. Along the Thread) (wool, networks, systems) and Ha zwei oohh (water, vitality).

The Grips Theater should be mentioned for its high proportion of musical productions. In Adams Welt (i.e. Adam’s World) (co-produced with the Austrian Szene Bunte Wähne Festival) music is experienced by four actors and the audience as a means of appropriating the world.

In the repertoire of the Schnawwl at the Mannheim National Theatre is Freche Fläche (i.e. Cheeky Surfaces), a piece situated between visual and performing art. The Young Opera, also at the Mannheim National Theatre, devoted its first music theatre performance for children of two years of age and up to the discovery of the voice: StimmSalabim (i.e. Voice – Hey Presto!) for two singers. The Baby Dance Party from 2009, for babies eight-weeks-old and up, is a joint festivity that is still a part of the repertoire.

Since theatre for the very young arises in close proximity to its audience, it is not surprising that it is often performed in day nurseries. There are special versions of  StimmSalabim and Freche Fläche for everyday spaces in the Rhine-Neckar region. Here the receptivity and the willingness of children to enter into something crazy are particularly high.

In 2013 and 2015 the Theater o.N. in Berlin was host to the FRATZ Festival and Symposium. With this gathering, theatre for the very young got its own festival for national and international exchange.

Anne Richter is a dramaturge at the Schnawwl in Mannheim and has long been a part of theatre for children and young people, including as a critic. In addition, from 2009 to 2010, she travelled through Germany as curator of the German Children’s and Young People’s Theatre Meeting, Hang On There! (Augenblick mal!), and is a jury member of the Youth Theatre Prize of Baden-Württemberg.