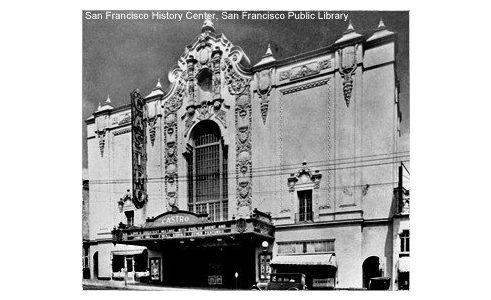 The Castro Theatre | San Francisco History Center, San Francisco Public Library Built in 1922, San Francisco's Castro is an extraordinary classic movie palace. It was designed by architect Timothy L. Pflueger, son of a German immigrant. During the pre-Art Deco period the theatre interior and design were borrowed freely and fancifully from all known historical styles.

Designated as San Francisco Landmark # 100, today the Castro shows an eclectic selection of films, both old and new, from around the world, with its mighty Wurlitzer organ played nightly before each movie.

Every year since 1996, the Castro Theatre hosts the Goethe-Institut’s Film Festival Berlin & Beyond.