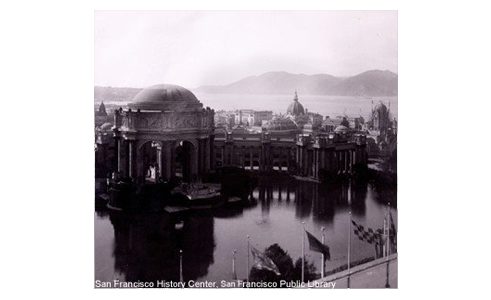 Palace of Fine Arts | San Francisco History Center, San Francisco Public Library This building is one of the most beautiful examples of Beaux-Arts in San Francisco. It was designed by German architect Bernard Maybeck and is based on the archetype of Roman architecture. The Palace of Fine Arts was built for the 1915 Panama-Pacific International Exposition. Transformed over the years, from a tennis court to a site for Latino weddings, it is known today as the location of the most renowned science museum in the United States, the Exploratorium.

In 1894 Bernard Maybeck (1862, New York – 1957, Berkeley) moved to San Francisco where he became a leader in the First Bay Tradition, the first generation of young architects who were inspired by the English Arts and Crafts movement and rejected the predominant Victorian style to introduce modernistic elements from Europe. As the son of an immigrant, a German craftsman, his origin was a great influence on his work.

Maybeck’s Palace of Fine Arts is all that remains of the Panama-Pacific International Exposition in 1915. By hosting the exhibition, San Francisco honored the Pacific Ocean and the completion of the Panama Canal; it also celebrated its own resurrection after the shattering earthquake and fire of 1906.

In 1969 the empty Neo-Roman ruin achieved a new function: Under the leadership of Frank Oppenheimer the former Palace of Fine Arts became the host of what scientific American would call "the best science museum in the world", the Exploratorium.