An abandoned brewery site near the very heart of Australia’s largest city has been reborn, and it’s becoming the toast of the town.

When Stuart White first moved to Sydney, he could smell the hops from the Carlton United Brewery as he cycled nearby. Now the professor can smell the flowers from the world’s tallest vertical garden from that same spot.

In an impressive display of urban renewal, the 170-year-old brewery site, with its grimy, dark red bricks and towering chimney, now includes a sparkling modern structure, which has been winning international accolades for its green credentials, including being named the world’s “Best Tall Building” in 2014. “It has become a new gateway to the city,” says Professor White, who specialises in sustainability.

Pub Crawls into the 21st Century

The old brewery site covers nearly six hectares of inner city Sydney. The area used to be walled and somewhat ominous, and after the brewery closed in 2003, it took on a derelict air. Developers wanted to reenergise the site, but many weren’t happy with the plan, and the project stalled in the Land and Environment Court.

But in 2007 the land was bought by Frasers Property & Sekisui House, a residential developer with a history of green development. That’s when White and his team from the Institute of Sustainable Futures at the University of Technology Sydney joined the project.

Their job was to make the most effective use of available resources to create a sustainable and liveable urban precinct. They weren’t just looking at keeping the costs and the impact on the environment down, they were also looking at social and cultural factors. Which is why One Central Park includes a multibillion dollar public art project. 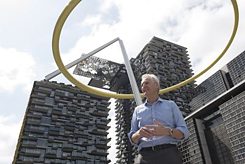 The first thing you notice as you approach the building is the twinkling heliostat. A cantilever near the upper floors houses hundreds of mirrors. They reflect the sun’s rays into areas that would otherwise be in shade, including a pedestrian corridor, the shopping atrium and an external pool.

At night, the heliostat houses an LED public art installation by light artist Yann Kersalé. Called Miroir de Mer, the artist describes the work as “a symbol of the sea in the city”. And on top of the structure is a sky garden, which includes just a fraction of the plant life that adorns the building.

Nature reclaiming its own

One Central Park boasts the highest vertical garden in the world. Designed by French landscape artist Patrick Blanc, green walls cover 1,200 square metres of the façade, from the footpath right up to level 33.
Hanging gardens cascade from the sides of the high-rise. More than 70,000 plants keep the building cool, saving energy, and trapping carbon dioxide in their leaves. Professor White’s team estimates the green walls are sequestering 225 kilograms of CO2 each year.

The vegetation on what would traditionally be a stark city tower 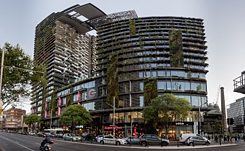 But some of the most impressive sustainability features of the site are not immediately apparent. While French design group Ateliers Jean Nouvel was working on the green walls, Professor White and his team advised the developers on the things you can’t see. Below the basement of the building, for instance, is a one million litre waste water treatment plant.

The water network harvests rainwater, roof and carpark drainage and other wastewater. Purifying it, the plant creates “refined” water that can be used for about 50 percent of daily non-drinking water needs, including the fluid used in toilets, washing machines, irrigation and firefighting.

The Green Building Council Australia has awarded One Central Park with a five-star green star – the highest rating they have given to a residential building to date. Romilly Madew is the Council’s CEO; for her, the ‘membrane bioreactor’ recycled water facility, which is arguably the largest in the world, is one of the most impressive elements of the development. The reactor sets a new benchmark for water-sensitive design by halving potable water consumption.

Power to the people

But the expert on sustainability is also impressed by the on-site power plant. “Central Park’s tri-generation plant is predicted to reduce greenhouse gas emissions by as much as 190,000 tonnes over the 25-year life of the plant – equivalent to removing 2,500 cars from the roads every year for 25 years”, Madew says.

Tri-generation means the gas-powered plant creates electricity, then makes use of the waste heat that is produced during the process for hot water, and finally converts that hot water into chilled water using an absorption cycle chiller. Also, in the future this plant could use locally-produced bio-gas as its fuel.

“In a normal generator you just get the electricity and you throw two thirds of the energy content away,” says Stuart White. And by having the plant on site, you don’t have to build big cables to bring electricity from far-flung power stations. This also reduces the vulnerability of the power supply. And apart from supporting 3,000 residences and 65,000 square metres of retail and commercial space across 14 buildings in the development, electricity produced by the plant can also be exported to neighbouring buildings offsite. 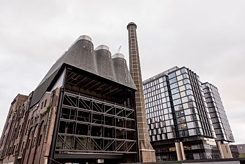 The tri-gen plant is two stories underground, with its chimney stack reusing the old brewery tower. It’s an example of the recycling and restoration that is yet another green feature of the site. Major heritage buildings dating back to the early days of industry in the fledgling Australian colony have been retained.

Far from being an abandoned brewery site, One Central Park is now a funky urban village, blending apartments, offices, shops, restaurants and a public park. It’s attracting inner-city workers and artists alike, and international students are drawn to the site due to its proximity to two of the city’s major universities.

“The entire precinct has had a transformative impact on a previously forgotten corner of Sydney’s Central Business District. It’s turned the site into a thriving community, creating street-level vibrancy and bringing people back to that part of the city”, Madew commends.

Lissa McMillan is an Australian journalist living in Sydney. She has worked for the country’s two public broadcasters, the ABC and SBS.