At CUCULA, a “refugees’ company for crafts and design”, five young asylum seekers are building sustainable livelihoods for themselves by making and selling designer furniture.

Behind a heavy iron door on the third floor of an old industrial building lies a bright room with whitewashed walls and a concrete floor. In front of the tall windows, five heavy work tables form a half circle next to a glass office cubicle filled with piles of papers and tools. The walls are hung with meticulously drawn drafts of furniture items; a weekly agenda is taped onto the wall. At first sight, it is a workshop like many others, but a closer look reveals a company that is unique in Germany. In addition to meetings and work schedules, the agenda also features German classes, museum visits, and legal counselling. Colourful, clumsily written messages are scribbled all over a large chalkboard: “Dankeschön,” “I want to learn German,” and “What are you working on?”

Thirsting to do something, in practice

In this Berlin space five young men from Africa, who are now arriving at the workshop one by one, build furniture. Since the winter of 2013 they have been trainees with CUCULA, the first company by refugees for refugees. At first, this seems quite impossible in a system that bars asylum seekers from employment and training, condemning them to inactivity and often to working illegally. Technically, therefore, Ali Nouhou, Moussa Usuman, Maiga Chamseddine, Saidou Moussa, and Malik Agachi are doing an unpaid pre-training internship. In practice, however, they are working – so hard that finished pieces of furniture are piling up on the tall metal shelf in the back of the workshop. In front of it is a bench of pale wood with a single blue board for a backrest. “This bench tells the story of how CUCULA began—the blue board is from the refugee camp on Oranienplatz, a square in Berlin’s Kreuzberg neighborhood,” Jessy Medernach explains.

Medernach helped build CUCULA. As a social counsellor, she is in charge of the education and counselling program for the trainee carpenters. When she started interning with the youth cultural centre Schlesische 27 in the fall of 2013, centre director Barbara Meyer had just offered to house five refugees from the Berlin-Kreuzberg protest camp at the cultural centre—only five of about 100 refugees on the square, but the cultural centre was able to offer a proper shelter for the winter to a few people only. “There were young men in the camp who were thirsting to do something but who had been condemned to inactivity,” Medernach remembers. Therefore, the Schlesische 27 initially organized painting and photography classes for the five new arrivals. At one point, product designer Sebastian Däschle substituted as workshop teacher and had another idea: “Why don’t you get the boys to build something real! Like furniture for their empty rooms.”

Däschle, who speaks fast and with lively gestures, had never been exposed to the issue of asylum before. “My topic was the environment, if anything,” he laughs. But he had always been good at building something from nothing. So Nouhou, Usuman, Chamseddine, Moussa, and Agachi started making chairs, beds, and tables under Däschle’s instruction and with Enzo Mari’s designs. Däschle had just gotten into Mari’s idea of democratizing design. A short-term substitute teaching assignment turned into a long-term project, and once the trainees’ rooms began to burst at the seams with furniture, they thought of founding a start-up: Why not sell their creations professionally, financing the young men’s training and livelihood?

“That’s thinking like a designer. You look at a seemingly given situation from a different angle and ask yourself what else you could do with it. And then you start experimenting to see if it’s possible to materialize your draft step by step,” Däschle explains. Medernach adds: “We reverse-engineered it: When the trainees came up with the name CUCULA, the company didn’t even exist yet. We went to an Italian design trade fair, sold our first pieces, and then built the website and a marketing strategy. The more it was talked about, the more tangible it became.” 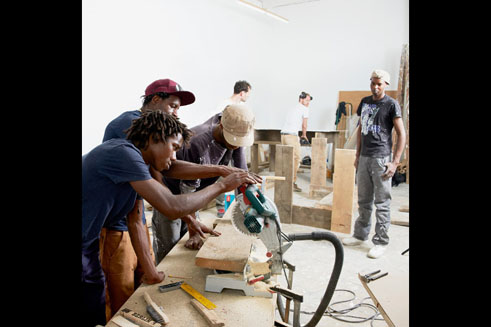 A network, an experiment, a fresh image

In the trainees’ native tongue, Hausa, CUCULA means “to build something together, to combine something.” And that is exactly what is happening here: Product and communication design, crafting and training, legal counselling and political activism complement each other. In addition to Medernach, Meyer, Däschle, and designer Corinna Sy, a network of volunteers, private donors, and legal experts have made the Refugees Company possible. Toward the end of 2014, a crowd-funding effort raised the necessary money to finance training scholarships for the five refugees for another year. This arrangement is a prerequisite for the refugees to apply for student visa and permanent resident permits. “We all know that there is no guarantee and that it remains an experiment,” Medernach describes the situation. “But whenever one of us gets frustrated, the group lifts that person back up.”

Even though the future is uncertain, the present keeps CUCULA very busy. “We want to depart from the typical clichés and propose a fresh image. These young men don’t even have a work permit yet, and look how much they are already contributing!” Medernach explains. In addition to filling 330 crowd-funding orders for chairs, the trainees are building the set for a production of Schubert’s Winter Journey. It was easy to find images on the subject of journeying and uprootedness. And the five young men also illustrated their own story in the CUCULA journals, which were made in cooperation with two children’s book illustrators. CUCULA will continue to build a new culture of welcome—one day, one screw, one piece of lumber at a time.

Raffaela Then holds a B.A. in sociology and psychology. She is an editor with FUTURZWEI and training to be a systemic consultant.