A collective contributes to the transformation of a neighborhood in Recife through action taken by residents.

In 2007, a wave of robberies led the residents of the Casa Amarela neighborhood, in the north of Recife, to gather in search of solutions. Vandson Holanda, a resident and a member of the CASS collective – the abbreviation for Casa Amarela Saudável e Sustentável (Healthy and Sustainable Casa Amarela) – tells how the coordination of the people happened naturally. “Neighbors in area and the administration of the Carlos de Lima Cavalcanti School organized a meeting, which we called Forum SOS Casa Amarela”, he says.The meetings that followed revealed that the establishment of a culture of peace would demand more than policing. It was necessary to reflect on two key points: on the one hand, the impact of public policies, favorable to automobiles and the real estate market, in the quality of life in the district. On the other hand, community action that could contribute to building a sustainable future. This was when Holanda and other residents planted the seed for CASS.

Many people left when they realized how demanding a commitment it was. One group, however, stayed firm. There was a connection with the district’s Pastoral Health Care (connected to the Catholic Church) and afterward collaboration with the vice-rector of the Universidade Federal de Pernambuco, which resulted in the project Rua ideal: comunidade saudável (Ideal street: healthy community).

Based on the research of two professors in the Department of Biological Sciences, the project intended to provide guidance to the community about ecological issues and citizenship, in order to understand what it needed to propose changes. The approach, however, maintained the vertical order of production of the urban space, anchored in a formal program that proved to be inflexible to the community’s demands.

Despite being short-lived, the partnership bore good fruits. The people’s interest in the debate in favor of improving the district began growing and contributed to the strengthening of the movement. In 2012, a collaborative process led to the proposal of a Plan for Bicycle Lanes for the Casa Amarela district. Larissa Almeida, member of CASS, says that the plan “had the objective of promoting action and solutions exclusively for the network of bike paths – proposals that were requested by the community and that were, in part, implemented by the city government.”

In spite of not being fully completed, the bike paths were the first big accomplishment the collective had stimulated. Since then, discussions were deepened, aiming to expand the community’s participation in local urban planning. In addition, a Facebook page was created to facilitate people’s engagement, promoting simple and effective ideas that indicated a new relationship with the city.

As ideas began to span the broader context of the neighborhood, it became noticeable that taking immediate action was what most stimulated participation in the community. Thus began the mobilization for the renovation and administration of the Biblioteca Popular de Casa Amarela (Casa Amarela’s Public Library). In 2013, residents, specialists and interested individuals in general were convened for a series of meetings in which the concept for democratic management and the relevance of the building to the district were presented and debated. Several proposals came out of them and turned into a plan for community management. The Library was renovated and returned, this year, to the residents, who are currently debating public participation in the management of the institution. 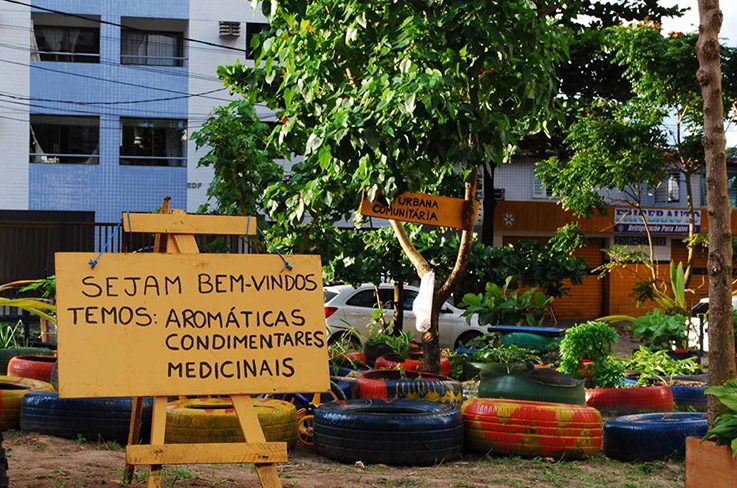 Photo (CC BY-NC-ND): Diego Buarque In 2015, a resident of the Casa Amarela district suggested to the group to turn an abandoned lot into an urban community garden. The proposal was approved collectively and a local group of volunteers formed to clean the area. Built and maintained by many hands, the garden soon became a place of interaction and exchange, where good nutrition, wellbeing and a demonstration of citizenship were valued and which caught on in other regions of the city. The new “praça” (“square”) obtained a public lighting system recently and has also been used in the evening for the neighborhood.

“I can say that vacant lots that used to create insecurity and unhealthy conditions are now being filled with gardens, that the road network has significantly changed since then, that we have a renovated library, but this would be very little compared to the individual involvement that people are learning to have again with the neighborhood and with their neighbors. Gathering people together to rethink the neighborhood and putting them as leaders in carrying out improvement will always be the biggest triumph of the movement,” says Larissa Barbosa, member of CASS. The culture of peace is establishing itself through the culture of citizenship, the activist believes.

Larissa Nunes is an architect and urbanist. She studied in Recife and São Paulo and completed her graduate studies in the COOP Design Research program, sponsored by the Anhalt University of Applied Sciences and the Bauhaus-Dessau Foundation, in Germany.

Larissa Nunes is an architect and urbanist. She studied in Recife and São Paulo and completed her graduate studies in the COOP Design Research program, sponsored by the Anhalt University of Applied Sciences and the Bauhaus-Dessau Foundation, in Germany.