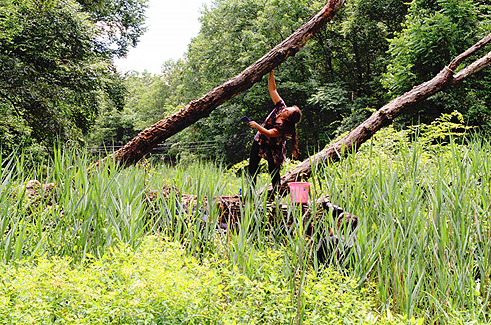 In June 2015, ecological artist Aviva Rahmani installed an unusual work of art in a forest in Peekskill, New York. She and several dozen volunteers used non-toxic paint to create blue sine waves, the symbol for sound waves, on trees that stood in the pathway of a proposed natural gas pipeline. It would pass within 105 feet of the Indian Point nuclear power plant and carry the fuel under the Hudson River to within 30 feet of New York City. Each painted tree signified a different note. When strung together, they became the overture of a symphonic score by Rahmani named Blued Trees.“When I looked at [maps of] the proposed pipeline, the first thing I thought of was musical lines,” Rahmani says. “I’ve had a great interest in music my whole life.” The 70-year-old, however, hoped that her creation—installed on private land with the owner's permission—would do more than just expose people to her art. She and a group of anti-fracking activists thought they could fight the future pipeline’s very existence. They hoped that by copyrighting the work, they might legally supersede the ability of Spectra Energy to take the land by eminent domain law (which allows the U.S. government to acquire private land for projects that benefit the public) and install the pipeline.

Rahmani and the other activists are opposed to fracking for the potential environmental impacts such as methane leaks, earthquakes, and groundwater contamination. They want the U.S. government to move away from fossil fuels and invest instead in clean and sustainable energy such as wind and solar power. “I have been intensely frustrated by the lack of regulatory programs against fossil fuel companies and the creeping horror of climate change,” Rahmani says when asked why she decided to join the activists.

The Seed of an Idea

The copyright idea came from Canadian artist Peter van Tiesenhausen, who owns 800 acres in Demmitt, Alberta, through which an oil company planned to run a pipeline. In Canada, oil and gas companies can lay claim to any land underneath private property up to a depth of six inches. Van Tiesenhausen, however, created artwork on the land and the vegetation, and he has kept the fuel companies off it by claiming the work is copyrighted and therefore they would have to compensate him handsomely for destroying it.

Whether such a defense would work in the United States is unknown. One of Rahmani’s lawyers, Patrick Reilly, said “we’re trying to extend the scope of copyright into a merger of natural works of art … and human works of art.” He said that bringing such a case to court, even if unsuccessful in stopping a pipeline, would help educate people on the need for stronger laws to protect nature simply for its aesthetic value. “The law is strong and clear about protecting any human-made art,” he said, “but silent as to any copyright over the natural beauty of nature.”Aviva Rahmani copyrighted her work in June and began fundraising to pay for additional legal fees. By the fall she had raised about 10,000 US dollars, but Spectra Energy was moving fast. Her lawyers managed to file a cease-and-desist order on September 30th, one day before the company was set to start razing trees along the pipeline corridor. The judge had already written her opinion on the application to use eminent domain to take the land, however. Less than two months later the company destroyed the Blued Trees overture in preparation for building the pipeline.

This artist hasn’t given up, though. On Earth Day 2016, some of her associates painted trees on additional sites near proposed pipeline installations in New York as well as in Virginia and New Hampshire. And Rahmani created another Blued Trees project along Newtown Creek, which flows through Brooklyn and Queens and is a federal Superfund site.

The Spread of Blued Trees

As news of her projects spread, it has inspired other independently constructed Blued Trees manifestations—some pipeline-related, others not—in places like Easton, Pennsylvania, and Belle Glade, Florida. (An interactive map shows all the locations.) “It’s been amazing to see this take on a life of its own,” Rahmani says. She plans a finale on 8 November, Election Day in the United States, but has not yet chosen a site for that work.

Maria Michails, another ecological artist, helped construct a Blued Trees installation in Rensselaer County, New York, where Kinder Morgan has proposed building a large compression station for a natural gas pipeline. When Michails first heard the particulars of the project, she was dubious. At first she didn’t like the idea of painting trees—even with non-toxic paint—but she quickly changed her mind.“When I arrived at the site and saw the very first painted tree I just had an overwhelming sense that this was right,” Michails says. “That this was elegant and sensitive and beautiful and just a really appropriate way to bring together community to try to deal with this mammoth problem.”

Rahmani first began working on the music, which is based on an 18th-century operatic symphonic structure, in her home in New York City using Google Earth to create a rough draft map of the sections of forest where it would go—each measure corresponds to one-third of a mile of trees. Later, she walked the route and sang the score, specifying trees along the way—small trees for shorter notes, more majestic ones for whole notes. Finally, volunteers armed with brushes and paint made of buttermilk and blue pigment helped her decorate the trees.

Rahmani has been an ecological artist for decades and recently completed her doctoral thesis, “Trigger Point Theory.” This argued that positive ecological change can happen when people find and change the “point of sensitivity” in an ecosystem. “The idea is that you don’t have to do incredibly difficult, complicated things,” she says. “You just have to figure out that one place and change will come.”

Rahmani is currently in the midst of a fundraising campaign on Indiegogo to pay some of her lawyers. She hopes to find a streamlined argument that they can use to protect all Blued Trees installments. Regardless of the legal outcome, though, she says what’s most important to her is that she gets people talking about what the work represents. “That’s a big part of conceptual art and public art in general,” she says. “You start the discourse.”

Nancy Averett who is based in Cincinnati, Ohio, is a freelancescience journalist who writes for a variety of national publications.