Ecological art
“Art That Walks in the World” 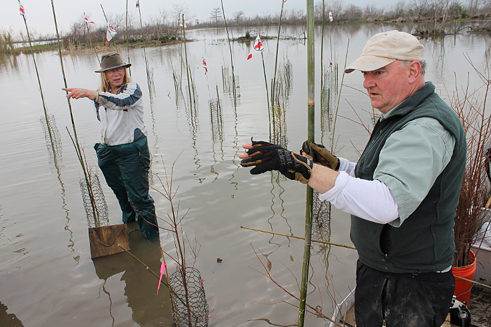 Daniel McCormick and Mary O’Brien have received plenty of accolades for their public sculptures over the years. But the review they like best? The turtle scat that they discovered each morning along one section of their work. “The animals found it instantly and that made us feel really good,” says O’Brien, referring to a 270-foot-long piece they built last spring along the Carson River in Nevada with the help of hundreds of volunteers.

Animal droppings probably wouldn’t excite most artists, but McCormick and O’Brien specialize in creating sculptures whose purpose is to help heal the environment. Their “Watershed Art” has appeared in the form of oyster beds in Oakland, storm surge barriers in Louisiana’s Gulf Coast, and now riparian habitat along sections of the Truckee and Carson rivers in Nevada.

As artists, we want to do more than just document the changes happening in nature,” says McCormick. “We want our sculptures to actually play a part in restoring the ecological balance of compromised environments.”

To do that, he and O’Brien weave together branches from plants taken directly from the watershed into 7-, 10- or even 20-foot-long sculptures—which McCormick describes as looking like huge pea pods—that are designed to fit the curves of eroded stream banks. Later they install them in the watershed by staking them to the ground with cuttings from native plants that grow quickly, such as willow and cottonwood saplings. The pieces trap eroded soil and runoff, allowing cleaner water to flow downstream. Eventually, the cuttings grow larger and swallow up the sculpture until it becomes just another part of the landscape.

For their latest projects, which are based in Nevada, McCormick and O’Brien have teamed up with The Nature Conservancy (TNC) to work on two different rivers: the Carson and the Truckee. This spring they finished up their work on the Truckee—four installations at TNC's McCarran Ranch Preserve, just upstream east of Reno.

The two rivers have a long history of human intervention, including unrestricted grazing, irrigation diversions, and dredging or straightening of the river channels—all of which has harmed their ecosystems. TNC estimates, for example, that the Truckee river basin has lost 90 percent of the forested habitat along its banks and up to 70 percent of its bird population since 1900. The organization has acquired several key wetland, riparian, and meadow habitats along both rivers and has been working to restore them for a variety of native fish, birds, reptiles, and insects as well as to provide natural and better flood control for downstream communities like Reno.

Within those key habitat areas are McCormick and O’Brien’s sculptures, which they created with the help of hundreds of volunteers from a variety of businesses and schools. “Because they help us create it, they have a pride of ownership,” says O’Brien of the local volunteers. “And eventually, they become the stewards of it.”

The two artists consulted with Elisabeth Ammon, ornithologist and science director at the Great Basin Bird Observatory, on how their work on the rivers might help attract birds. “They showed me some draft designs and wanted my input on whether they would be useful to native birds,” says Ammon, who is an expert on the restoration of riparian habitats. She added: “The migrants are just now arriving so it will be interesting to see how they use them. The structures should make really great perches for birds. Sometimes in wetlands, there’s not much to perch on, birds like to sit up high and look down to observe insects and fish.” In fact, several house wrens started buzzing around one of the Truckee sculptures, called the Avian Habitat Resource Sculpture, while the artists were still working on it. The birds mated and built a nest inside it.

McCormick and O’Brien’s sculptures were featured at the Center for Art + Environment at the Nevada Museum of Art from December 2014 to April 2015. William Fox, director of the center, says their work was a great fit because the center collects, studies, and promotes art that is designed to “intervene directly in the affairs of the earth.” Such art, he adds, is part of a natural progression as artists who once simply catalogued the natural world are now interacting directly with it. “Daniel McCormick and Mary O’Brien are in the forefront of this evolution,” he adds. “We call this art that walks in the world.”

Giving advantage to the natural system

The idea of creating art that might heal an ecosystem began with McCormick, who started making the large basket-shaped sculptures in the early 1990s. He became known for doing his artistic restoration work in the Golden Gate National Recreation Area and began giving workshops to various organizations such the West Marin Unified School District in northern California. “I would hike out there with the kids and we’d put (the sculptures) in the gullies that were delivering agriculture waste to the main creek,” says McCormick. “We were able to slow the erosion process down to keep silt from filtering up to the spawning grounds of native coho salmon and steelhead trout.” O’Brien eventually joined him.

The two are life partners as well as colleagues and have worked on projects all over the country, although most of their work has taken place in California. Lately the work has become more challenging as climate change advances. Nevada, for instance, has been suffering from a long drought, so the artists have to plant their willow and cottonwood cuttings in deeper water than before in order for the saplings to survive the heat and dryness. “There are assumptions we make on the scientific side of restoration, but when you’re out in the field all of those rules don’t apply necessarily because the climate has changed,” McCormick says. “We’re in the midst of a 7- to 10-year drought.”

Tourists who want to see McCormick and O’Brien’s watershed art can visit the River Fork Ranch near Genoa, Nevada, or the McCarran Ranch near Reno. The Nature Conservancy of Nevada has maps on its website to help people find the sculptures. But they shouldn’t wait too long, as eventually the sculptures will be hidden from view as the willow stakes take root and grow into larger trees. The fact that those structures will one day be nearly invisible doesn’t bother the artists. “They are intended to give advantage to the natural system,” explains McCormick, “And after a period of time, as the restoration process is established, the artists' presence is less and less apparent.”

Nancy Averett is a freelance science journalist who writes for a variety of national publications and is based in Cincinnati, Ohio.