In light of worldwide events over the past several years, the P3 Game Jam invited game developers to create games responding to the question “What does privacy mean to you?”

© Christopher Totten/American University The weekend of September 23-25, 2016, American University Game Lab (represented by Christopher Totten, Game Artist in Residence) and the Goethe-Institut organized the P3 Game Jam, an event where game developers created game prototypes over the course of a fourty-eight-hour period. In light of worldwide events over the past several years, the P3 Game Jam invited game developers to create games responding to the question “What does privacy mean to you?”

P3 Game Jam Highlights
Private (i)
There are four characters, among them a singer who needs publicity and a corrupt police officer who benefits from secrets. The characters need one another for different reasons, but they have one thing in common: they must each attempt to safeguard their own privacy as much as possible while trying to collect information about the others. One can sell or hide secrets, or blackmail others. A complex game that is a lot of fun and can be played in half an hour. Digital and non-digital versions available.
Game developers: Jonathan Moriarty, Rock and Eve

Goethe-Institut staff and guests playing the non-digital version of Private (i), a game of stealing and protecting information. | © American University / Christopher Totten Digital Highway
This game is based on a typical car-racing game in which the goal is to make it around the curves as fast as possible and avoid all obstacles without leaving the track or spinning out of control. The idea of game developer Qinshuo Wang is to use "privacy" as a form of payment. One is confronted with various tollbooths on the Internet highway and must choose what kind of payment to make: trivial privacy, important privacy, or crucial privacy. By paying with crucial privacy, one gains a boost of speed but may run the danger of losing one's personality.

A P3 Game Arcade attendee playing Digital Highway. | © American University / Christopher Totten Privacy of Mind
The world is full of advertising which shapes our perceptions and desires. "Privacy can be something personal," states game developer and author Daniel Silber. But how does one even develop a personality when brand names are lurking everywhere? In this game, the world is the inside of an office building. Brand names are stuck on property and walls. How can one find oneself in the midst of all this? The best method is to search for solitude while simultaneously choosing fast paths free of advertisements. The game is a beautiful utopia. It can be played quickly so one can play a second or even third time and improve the skills of avoiding the advertising cacophony.

In Privacy of Mind, players try to leave their office to find a private place away from media messages and advertisements. | © American University / Christopher Totten 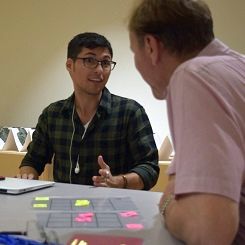 AU Game Lab student Dan Petricca shows off his inventive non-digital game Switch, where players battle to put malware on one another’s computers with translucent game boards. | © American University / Christopher Totten Switch
In this game for two players by AU Game Lab student Dan Petricca, each player has a translucent gameboard template on which he positions the locations of his PC and malware on each turn. He can't see the moves of his opponent, but at the end of each turn, the templates are overlaid on one another to determine if one player's malware has destroyed the other's PC or vice versa. One can also score by setting up a firewall against the opponent. This game was developed from everyday experiences in which one never can tell what viruses and attacks are lurking on a computer along with all the personal data. This is a real threat to personal privacy. This game is quickly played and available in offline and online versions.

Bunker Builder
Justin Park plays with the thought that only the wealthy can afford privacy these days, and the best place to ensure it is in outer space, where they build themselves a gigantic bunker using three-dimensional backhoes and dump trucks.