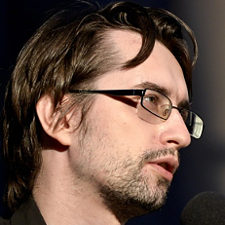 Graz is the second largest city in Austria and home to a well-known theater, Schauspielhaus Graz. Although situated on the edge of Austria at the southeastern corner of German-speaking Europe, in many ways the city lies right in the heart of the continent. The Schauspielhaus itself produces everything from classical plays, musicals, and light comedies to more contemporary forms like site-specific work and documentary theater. Performances take place in three venues within the building and in locations throughout the city. The Schauspielhaus is set up as a repertory theater with around 300 performances per year, running over several themed seasons. Up to 25 main productions are featured at the Schauspielhaus every season; some 75,000 visitors attend performances annually.

Play Synopsis: A young man has set up a garage sale to get rid of some extra things, including a t-shirt with identification information that his grandfather used to wear in case he got lost. A woman at the sale faces a dilemma when she wants to buy the shirt.

Clemens J. Setz was born in 1982 in Graz and is a true child of the city. He studied mathematics and German language and literature in Graz, and both subjects are visible in his work: he is fascinated with the new possibilities of digital technology and is a passionate lover of language, especially artificial language. He has published a number of extensive novels that have been translated into 15 languages as well as poems and translations from English and Esperanto. His works have been short-listed for the German Book Prize and received several important awards, including the 2015 Wilhelm Raabe Literature Prize. His latest full-length novel, Die Stunde zwischen Frau und Gitarre (The Hour Between Woman and Guitar), debuted in fall 2015 and confirmed his status as one of the biggest talents in contemporary German literature. Though his novels have been adapted for the stage by Schauspielhaus Graz, he is new to original writing in theatrical forms and is excited to take his first steps into playwrighting with P3M5.