Like any deep wound, this, too, will leave a scar on the surface of mankind's evolution. 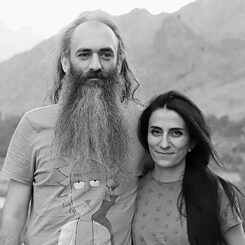 Isolated in a makeshift shelter like a lone windmill, a person transforms digital information streams into hashtags. There is no absolutely pure information anymore, every message, every warning, every request is a translation, localization, adaptation to one’s own reality.

Data is taken from the source by those responsible in each country, local features are added, trimmed, changed according to censorship – the final result is transformed into something completely new. Then, transmitting information from officials, one adds his or her subjective emotional perception, and the output is a messy mass, decorated with semantic hashtags.

After every crisis, be it a war, a natural disaster or a pandemic outside the window, there comes a time of "cleansing the ruins". Our strategy of dealing with it is manual work. #stayinghome in our shelter, we are examining our space, the new reality making us get acquainted with all the surfaces of this familiar territory, picking up things that were previously just lying around, researching digital and analogue archives, sorting through old works, planning new ones in a relatively new world. And, yes, in the evenings, we light a fire or make popcorn and watch a movie.

Like any deep wound, this, too, will leave a scar on the surface of mankind's evolution, but after two generations, fairy tales will be told about it. The human body will develop immunity, virologists will come up with a magic pill. The contents of first-aid kits will change. People will not stop doing what they are used to doing. A few years of economic inconvenience and everything will return to normal – a new normal. The world will not turn into any of the post-apocalyptic scenarios we know from books and movies. It’s possible that there will be more control over our movements, but after all, Big Brother was already following everything, wasn’t he?

The world has never been so united in finding a solution for a problem. We are monitoring the progress of the situation and the decisions made by each country in real time. It doesn’t matter how and where the virus came from, how much time and resources it will take to find a vaccine, every single person today is working to make sure that their self-isolated neighbour is that little bit safer.

And, of course, a sense of humour. It doesn’t matter how out of control, or over-controlled, the situation is, there are people who create images of Van Gogh wearing a mask.

Ani Qananyan and Ed Tadevossian are a young artist couple based in Yerevan, Armenia. Ani Qananyan (born in Georgia in 1990) is a clay artist, painter and mural restorer. As a painter, she works in abstract expressionism; her clay art mostly consists of abstract objects. She has worked on the restoration of Armenian church frescoes in several countries. Ed (born in Gyumri, Armenia, in 1982) is a documentary photographer. His main interest lies in the work processes of people from different professions. Together, they founded the Shushan Gallery, based in their own home.