German architects no longer see settlements that are not planned and organize themselves as a problem, but rather as models. What exactly can German cities learn from them?

The centres of German cities are dying. Housing space is expensive and scarce, families are moving to the surrounding areas, people shop in shopping malls and come to the city only to work or sightsee. You find high-rise buildings in the centres as rarely as you do alternative, communal living concepts. Only those who have plenty of money can live directly in the centres; the remaining space is rented commercially or is in the hands of investors. In the centres of cities such as Caracas in Venezuela, on the other hand, life pulses. Symbolic of this is the Torre David: the residents use this house as they need it, without the permission of the authorities. They adapt the existing structure, a house without windows and plaster, to their needs. Here they live, learn and shop; here a self-organized system has emerged. 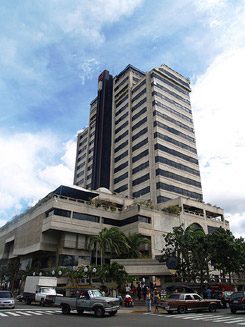 Torre David Tower in Caracas, Venezuela. | Photo: Jorge Andrés Paparoni Bruzual © Flickr (CC) In Germany this would not be possible because the laws that lay down what, when and how buildings may and should be built are observed strictly. In addition to bureaucratic hurdles, a sense of aesthetics, culture and mentality play a role in urban planning. You don’t build a high-rise in the middle of the market square simply because it is can be done. But wouldn’t it be reasonable to make use of real estate in a holistic and more flexible way? Not only metropolises in Venezuela, Indonesia and other emerging countries are becoming more and more densely populated; in German cities too space is becoming tighter. More and more people want to move to cities. Rents are rising, traffic clogs the streets, natural resources are being depleted. And because of economic crises and the liberalization of markets, the German state seems less and less able to maintain and expand these infrastructures. In the long-term, the population will have to assume more responsibility for their cities, but has yet to learn this – unlike, say, in Caracas. In informal settlements, architecture is becoming more and more liberal. In Germany, on the other hand, according to Herbert Klumpner, Professor of Architecture and Urban Design at the Swiss Federal Institute of Technology (ETH) Zürich, architecture follows a “congealed policy”.

Strengthen communities, make use of resources

A greater emphasis on responsibility also strengthens communities. The sociologist Richard Sennett describes how these new cooperations in societies in which planning is hierarchical have not yet been tried. “People need to develop skills to get along physically, and even more socially, with their neighbours.” In Medellin, Columbia, according to Sennett, communities have already moved in this direction. There, action groups are building libraries and hospitals. In Berlin, too, there are examples of community initiatives such as the former Urban Hospital, which is now a joint building project occupied by several groups, and the “Möckernkiez” (i.e., Möckern Hood) – but they are the exceptions.

German cities and their architecture can learn much from developments in informal settlements so as to respond more flexibly to social changes. Perhaps German cities will soon be thinking of skyscrapers which previously housed companies and where now people from different social classes work and live. Or of communal and generation-linking housing complexes that are ecologically sustainable, inter-cultural and socially integrative.

Martin Betz read economics and architecture at the Universities of Witten and Istanbul, and has worked in urban development in Jakarta.