Young homeless in Finland
A success story – almost across the board

Finland’s policies to tackle homelessness, especially its multi-pronged Housing First programme, are undeniably a huge success. But some the latest figures give grounds for concern.

In 2017 Finland was the only country in Europe to report a drop in homelessness. And so far in 2018 the homeless population has been declining for the fifth year in a row. The latest statistics show roughly 7,000 registered homeless, four out of five of whom are temporarily living with friends or relatives. In sum, very few people in Finland now have to spend their nights in the street or in homeless shelters.

The key to the success of the Finnish model is its simple guiding principle since 2008: “Housing First”, i.e. a home of one’s own is the fundamental prerequisite for putting one’s life in order. A home of one’s own isn’t the goal, it’s the precondition sine qua non. In practice this means a homeless drug addict should be housed even they haven’t kicked the habit. But a change of paradigm was necessary before the “Housing First” principle could prevail. Back in the 1980s, Finland’s homeless had to prove themselves capable of conforming to social norms to qualify for social housing. In most cases, that meant proving complete abstinence.

The Finnish government, local authorities, NGOs and volunteers have been working closely together over the past few decades to combat long-term homelessness in particular. The “Housing First” campaign has been a very long, slow and ultimately highly effective concerted effort. And it has had favourable effects on the Finnish economy as well as on various areas of society, including a drop in the number of arrests by the police, for instance.

However, the latest statistics also show an increase in homelessness among young people for the first time since 2012, even though the figure for women and immigrants has declined during that period. At the end of 2017 there were 1,585 homeless under the age of 25 – which is 13% more than the year before. This is one troubling development.

The statistics bear out expectations about regional disparities: homelessness is concentrated in the capital. In fact, over half the nation’s homeless live in Helsinki.


To house the homeless, the first requirement is a stock of available apartments to let on terms that are not dictated by the market. In addition to the Finnish national and local administrations, several NGOs and foundations offer inexpensive rentals.

The chief governmental partners in the Housing First programme are KELA, the Finnish health insurance, and ARA, the Finnish Housing Finance and Development Centre. KELA provides basic social security for the population, including a housing allowance where necessary. ARA contracts for the construction of low-cost housing all over the country. Various municipal organizations, moreover, commission the building of residential housing for low-income tenants.

Organizations such as the Y-säätiö and Sininauhasäätiö foundations offer affordable housing as well, including “assisted living” facilities: blocks of flats that provide accommodation as well as nursing staff within the framework of the Housing First programme. Furthermore, various NGOs and foundations offer a wide range of activities at adult daycare centres and try to help the homeless in their everyday lives.

Lottery proceeds to help the homeless

Finnish national and local government efforts to combat homelessness are funded by tax revenue. The work of the organizations is, for the most part, funded by STEA, Finland’s Funding Centre for Social Welfare and Health Organizations. This is an independent state-run agency which, working with the Finnish Ministry of Social Affairs and Health, disburses the proceeds from Veikkaus Oy lotteries to social and health organizations. Veikkaus Oy is the state-owned company that has a monopoly on sports betting and lotteries in Finland. In terms of turnover and income, it’s one of the five biggest companies in the country. Its proceeds, over €1 billion a year, are distributed to various social and health NGOs. 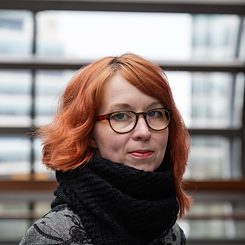 Photo: Joonas Vohlakari "Our foreign guests are often particularly interested in the STEA organization and the funding model for our work with the homeless," says ARA expert Hanna Dhalman. “STEA financially supports many service providers. Without their hard work and experience we’d be pretty helpless when it comes to local measures to prevent homelessness. This year, for example, a new three-year project funded by STEA has been launched to house homeless women.” Veikkaus has been criticized, however, for putting most of its gaming machines in areas where the poorest, least-skilled and otherwise disadvantaged people live. This is also where the machines yield the highest proceeds.

The homeless situation in Finland certainly looks good on paper. But, as mentioned above, the statistics obscure some enduring problems and population segments at risk.

The increase in the young homeless population is due to a wide array of social and economic changes. For one thing, affordable housing is growingly increasingly scarce. Meanwhile, there are more and more people in debt and unable to pay their bills. There have been cuts in child welfare. Vocational schools are downsizing and admitting smaller numbers of students. And last but not least, street trafficking keeps putting new drugs into circulation. The number of new state-subsidized housing units built by ARA has dwindled to a fraction of the figure for previous years. On the positive side, the importance of financial counselling to prevent overindebtedness is now widely recognized and efforts are underway at schools, in particular, to educate young people about the risks of overindebtedness. 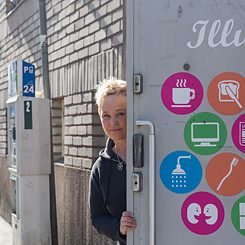 Photo: Joonas Vohlakari
"The increase in homelessness among young people is a blot on our social policy," says Leena Rusi, a project manager at the Sininauha Foundation. “How could this happen? We’re especially worried about the plight of young men who drop out of school or have learning difficulties.” Rusi has also worked as head of the housing office. Based on this first-hand experience, she dares to publicly air an issue that is not covered by the homeless statistics. "In housing units established according to the Housing First rule, almost everyone consumes alcohol or drugs, and very few can be rehabilitated under these conditions. On the contrary, alcohol and drugs are always available. In any case, it’s important to get people off the street so they’re not obliged to perform distasteful services merely to have a roof over their heads.”

Homelessness and drug abuse go hand in hand in Finland. NGO workers here know families in which both phenomena have been passed down for three generations now. Rusi points up these problems that belie the statistical success story: "In addition to Housing First services, Finland needs alternative approaches to drug addiction. The fact that rehabilitation units for drug addicts have been abolished to cut costs is another big problem."