He keeps his spray paint cans in an old cooler. His acrylic paints and chalk are stashed in a cracked milk crate. They are piled under a blue tarp beside two large dog kennels. A pair of well-trained pit bulls, Big Ugly and Space Ghost, sniff the air. If a stranger with bad intent ducks into this space, they know what to do.

By Jessica Gelt / Staffwriter for the L.A. TIMES

Crushow Herring ducks out from under the makeshift canopy, squeezing along a chain-link fence, past the jumble of clothes and toiletries in his tent, and emerges at the corner of Fifth Street and Central Avenue on skid row in downtown L.A. He takes a deep breath. The air is damp and cool after an early morning rain, and a man in green track pants and a baggy blue sweatshirt is hanging a damp blanket out to dry across the way. He nods a solemn greeting to Herring, who works as an artist under the name ShowzArt.

“People say they want 40 acres and a mule,” ShowzArt says. “I got 50 blocks.”
He is a celebrity in this neighborhood of nearly 17,000. Wherever he goes, men and women wave and smile. Walk beside him and you can feel the deep sense of community and shared experience that bonds residents together.
ShowzArt is in demand elsewhere too — about a mile away, inside a sleek Arts District pop-up gallery where a piece of his work is being shown as part of a 10-day event called We Rise. Launched by the L.A. County Department of Mental Health and running through Monday, the event includes live performances, interactive workshops and plenty of art to raise awareness about the importance of early intervention and treatment for mental health issues.

If you’ve spent any time in downtown L.A., you know ShowzArt’s work, you just may not know it’s him.

Yosi Sergant is producing We Rise through his company TaskForce, which recruited Anna Bulbrook’s Girlschool L.A. to curate much of the content. Both organizations work on projects dealing in social justice. Sergant is best known for commissioning the Shepard Fairey “Hope” poster of Barack Obama, under whom he subsequently served as the White House arts and youth liaison and, after that, director of communications for the National Endowment for the Arts. (The Secret Service nicknamed Sergant “Hollywood” for wearing a studded belt that set off the metal detectors his first day on the job.) Sergant is passionate about art’s ability to unify and organize disenfranchised groups, and he contends that the We Rise gallery can rival any museum in the city in quality. ShowzArt’s untitled acrylic painting shares a wall with Otis College of Art and Design alum Kohshin Finley, son of prominent designer and guerrilla gardener Ron Finley. Other artists with work on view include Fairey, Andrea Bowers, Mel Kadel and the prominent street artists Vhils and Swoon. 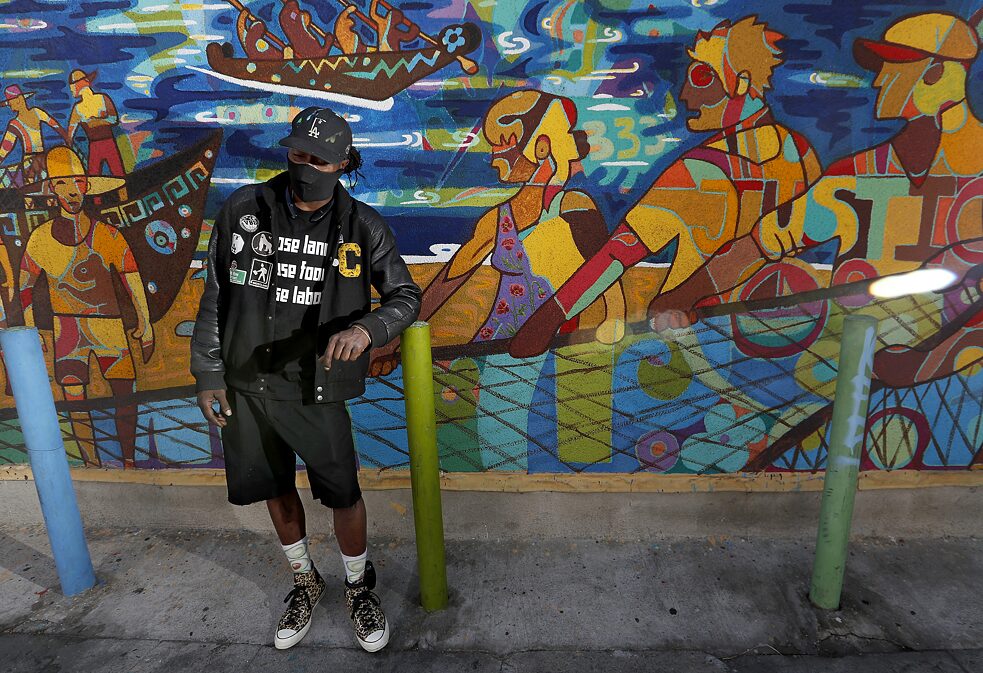 ShowzArt with the mural “The Living Water,” to which he contributed, near the corner of Fifth Street and Central Avenue in L.A. | © Luis Sinco / Los Angeles Times
“If you’ve spent any time in downtown L.A., you know ShowzArt’s work, you just may not know it’s him,” says Sergant. “He has given visual expression to his experience, and to that of so many others who don’t have the ability to do so.” ShowzArt has helped to create colorful murals that stand watch over the daily humiliations of people living on the streets. He leads the way to one in the alley beside Gladys Park, which has been cleaned up and welcomes those wishing to relax on the grass, use a free phone-charging station or safely discard their used syringes. “I’m here just to be the light I can be, because I can’t change anyone” ShowzArt says. “This is me making reparations.”

ShowzArt, 41, was born in Kansas City, Mo. He moved to South Los Angeles in the fifth grade and attended Martin Luther King Jr. Elementary. He played basketball at Bakersfield College and later played a full-contact variation of basketball called Slamball that allowed him to tour the world, including Italy and China, he says.He thought he was on a positive path in life.“But it didn’t work that way, regardless of what I did,” he says. When he returned to the States, he felt judged by the color of his skin and thought people in positions of power and privilege were labeling him as “less than” no matter how hard he tried to conform to societal expectations. So, he says, he decided to become what he figured they feared most. At 21, he started selling crack cocaine on skid row. He says he intended to use the money to open a store with his own apparel line and skateboard designs. His salvation came in the form of a baby boy. He stopped dealing in 2006 when his son was born. ShowzArt later returned to skid row as a community organizer, working to provide residents with access to the arts and healthy meals through a nonprofit called Life Is, which has morphed into the Sidewalk Project.

The past caught up with him in 2015, when he got slapped with what he says was a false drug charge that had him facing 10 years in prison. He won that battle, but it landed him on the streets, broke, he says. Late last year, he was charged with an attempted robbery that he says he did not commit. He says he was waiting for food near Sixth and Spring streets when a police officer accused him of the crime. ShowzArt wears an ankle monitor while he awaits a trial set for June.These setbacks are part of what keep him on the street. He just can’t seem to get ahead of them. But ultimately, he says, living on skid row is a choice — a decision not to contribute to a society that is indifferent to people like him. His son, 13, and daughter, 8, live with their mother in Long Beach. She and ShowzArt are engaged, and have been for years. ShowzArt says he contributes to the rent and helps to provide for the kids, and he stays with them from time to time, including while he is under “house” arrest.

“She’s had my back all the time,” he says of his fiancee, adding that she understands his need to be on skid row due to his conviction that the system is rigged. He’d rather be with his compatriots on the street, helping them where they live. “I realized I’m still trying to fit in with what the world has created. But I can’t race this race; this isn’t my race; I fold,” he says, his dark eyes flashing with anger and frustration. “I can fold. I don’t have to play. I choose not to play until they give me the right tools to play.” He shakes his head, his eyes tearing up. “They’re not giving me the right tools, you know?” he says again, almost to himself.

ShowzArt is amassing those tools his way. He started an Instagram account and has nearly 1,000 followers; he also has his own apparel line called Hating Is a Crime, which sells at Sportie L.A. on Melrose Avenue and Soul on Ice in West Adams. He paints on commission here and there, but not enough to pay rent just yet, he jokes.

I realized I’m still trying to fit in with what the world has created. But I can’t race this race; this isn’t my race; I fold.

He talks about his future prospects on a late-morning walk to the We Rise gallery, where he is warmly greeted by event organizers including Sergant and Mimi Martinez McKay, deputy director of strategic communications for the L.A. County Department of Mental Health. “The gallery is a journey from disconnectedness towards meaning and purpose,” McKay says of We Rise and her department’s goal of creating connections with those most in need. For this pop-up show, curators concocted a mix of people coping with mental health issues and those wishing to help spread awareness about the danger of not properly diagnosing and treating those issues. Sergant walks ShowzArt into the gallery to see his piece on the wall for the first time. 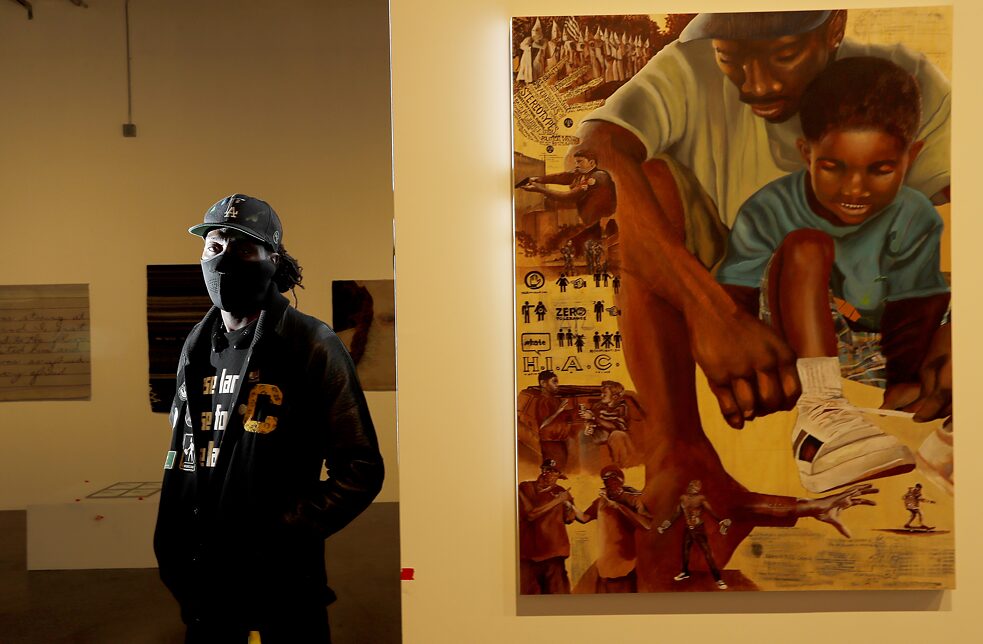 ShowzArt stands beside his untitled artwork at the We Rise pop-up gallery in downtown Los Angeles. | © Luis Sinco / Los Angeles Times
It’s a painting of a man teaching his young son to tie his shoes. There is tenderness in the way the man leans over his son’s shoulder. A montage of potential danger surrounds them, threatening their moment of peace. Images of the Ku Klux Klan, of policemen brandishing guns, and of gangbangers flashing signs.
“I tell my son, ‘Hey, you’re great,’ not, ‘You’re gonna be great when you’re older,’ ” ShowzArt says. He repeats the message: “You’re great now. Right now.” He steps back and looks at his painting, arms crossed, eyes gleaming proudly. Later that night, the gallery will celebrate with a private party. Privilege and good intentions will flood the shiny white room, and ShowzArt will be there to bear witness.

If it’s entertaining, Jessica Gelt has likely covered it. Since joining the Los Angeles Times in 2003, she has written about television, music, movies, books, art, fashion, food, cocktails and more. She once played bass in a band with an inexplicably large following in Spain, and still gets stopped by fans (OK, maybe a fan) on the streets of Barcelona. She loves dive bars and very dry martinis with olives, though never simultaneously.