After our most recent collaboration on the Translations Film Festival, Goethe Pop Up Seattle is thrilled to partner once more with Three Dollar Bill Cinema to help bring two German feature films to the 2021 Seattle Queer Film Festival. Films at this year’s festival are available both at in-person screenings and virtually.

Harry has been partying for two days when he meets Johannes on the dance floor of a club in Berlin. With 15 hours left until Harry’s flight back to London, Johannes offers to help him print his boarding pass. This mundane task leads to a day together, wandering the city. The contrasts in their lives and values force them to confront their own truths and be completely honest.


This Grand Prize winner at the Rhode Island International Film Festival is about a brief encounter and a fleeting moment of happiness and possible love.
Get Tickets 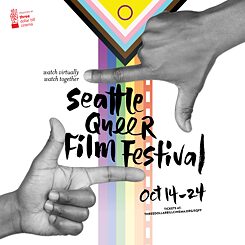 Having started as the Seattle Lesbian & Gay Film Festival in October 1996, the Seattle Queer Film Festival has grown into the largest event of its kind in the Pacific Northwest, gaining industry and audience recognition for showcasing the latest and greatest in queer film, from major motion picture premieres to emerging talent. An important venue in the Seattle film scene, the festival provides unique opportunities for visiting and local filmmakers to engage and entertain the Greater Seattle region’s LGBTQ and allied community.

COVID security policies apply: SQFF requires all in-person guests to present proof of vaccination and remain masked when not eating or drinking.