Heros and Gods
A Mytho-Psychological Perspective on male masculinity

Jungian psychology studies journeys of hero and heroine in fairy tales and myths. Thus gods, goddesses and demons represent certain natural constants of the unconscious psyche, ways in which the emotional and imaginative elements of the personality behave.

By studying the mythical journeys one comes to understand certain truths, and unconscious patterns of behavior, which the Jungian psychologist calls archetypes. They enable us to observe general reactions, tendencies and sequential patterns of the human psyche highlighting the way natural instincts behave in a cultural context.

“For an archetype to have a major influence upon our lives, there must be some external duplication or reinforcement of the pattern: an event in one’s life or stories recounted in the culture that activate that pattern. Therefore, it is both our personal histories and our culture that influences which archetypes will be dominant in our lives.”*)

This article looks at some unconscious major reasons that tells us what it means to be a real man in 2021 in the Indian context. Do we still agree with the notion of what is a “real man” - or should it be replaced or supplemented by more differentiated perspectives?

Looking at an archetypal story that dominates the politico-cultural discourse of the country since decades is undoubtedly the Ramayana. It has been danced, recited, enacted and argued over through the ages, but still seems to influence wide sections of society today. Since the Eighties, ever since a statue of Rama appeared in the Babar Mosque in Ayodhya, the archetype of Rama has dominated the political discourse as well. It culminated with the destruction of the Mosque, and reached a new height with the Supreme Court’s decision to allow the construction of a Ram temple in the exact place where a mosque had stood

In the Ramayana, Rama is not just the ruling King, but the maryada purushottam, the ‘ideal man’. One can therefore assume that he therefore incorporates the archetype, the basis for the collective unconscious of what the incarnated male self must look like. The mythical Rama was raised to rule to defend his territory, skilled in the art of warfare, to wield power and protect his kingdom. Thus every male must inhabit the warrior archetype.

But is this all there needs to be for a man to be a ‘complete man’? I would argue that this archetype represents only part of the male psyche.


MYTHICAL SYMBOLISM – RESCUE OF THE FEMININE

At the mythical level the King and Queen symbolizes the expression of the complete inner Self, in the form of masculine and feminine energies. But both man and woman must inhabit these energies, in varying degrees. They are an inherent part of each of us. Has Rama integrated his aspect? This is the question that we must ask. The feeling function is considered to be part of the feminine archetypal energy. When it is blocked it becomes a symptom of psychic development that lacks integration and expression. The mythical story expresses this as the liberation of the queen who is held ‘captive’. The male hero must rescue her. Captivity indicates that the masculine/feminine aspects are out of balance. Thus Sita constitutes the feminine side of the development. Freeing her indicates the release of the feeling held captive. It is a further stage of conscious development: Man gets in touch with his inner voice and frees himself to become a complete human being


HAS THE RULING KING UNITED WITH HIS QUEEN?

One could argue that Ram has liberated Sita and thus integrated the values of the rescued feminine. But has he overcome his suspicion about women – the shadow tendencies in himself. Every reader of the Ramayana knows that he continues to mistrust his queen. Sita is still viewed as potentially unfaithful, and thus untrustworthy. The story tells us that he cannot bring himself to re-establish her as the ruling queen in his kingdom. In other words he is still held captive by the patriarchal collective values that deny him to elevate his queen – femininity - to his inner throne, and thus come into his own. Why must a ‘King’ elevate a ‘Queen’ as an equal next to her? In psychological terms, the human psyche cannot live in a healthy state unless it is balanced by its opposite. The masculine power without love and compassion is bereft of feeling - a drive that remains unconscious. In other words his feeling function remains underdeveloped.

Sita personifies the soul of the collective psyche; her exile and constant banishment record how the patriarchal mentality has driven the feminine completely out of the culture. She has been stripped of her defences and is constantly hurt in matters regarding relationships, which are the most vulnerable and trusting aspects of the wounded ‘Self’.

Rama does rescue Sita from Lanka. But he does not trust her to be ‘pure’, and therefore be the Queen in her full right. She reaches a stage where her very core is violated and she shuts down. This is the deepest loss, worse than her exile, where she has been respected as a paragon of virtue. It is a story experienced by the many Sitas in today’s India even today. Thus we realize that a close analysis of the relationship aspect of the myth uncovers patriarchal thought forms. And by holding up King Rama as the ‘maryada purushottam’ our collective unconscious continues to devalue feminine values – in both women, as well as men.

Sita can no longer survive in a culture that honours just these values. This is not true only of the man/woman relationship. We express the same values in our relationship to ‘Mothe Earth’, amassing wealth without any conscience, exploiting its riches and degrading her on an unprecedented scale. We are still caught up in the accumulation of territory, wealth and building our own castles. The feminine values Sita symbolizes are about love, relationship, parenting, partnership, introspection and intuition. If we are awake and alive we can see what is happening all around us. The male drive, without balancing the feminine force of feeling and compassion for self and others, prevents a society to live out these values.

Sita remains the exiled queen, while we continue to blindly worship and idolize the mythological Rama who has not reconciled his feminine values as an ideal role model. Sita is not some mythical figure that may or may not have lived. She is the living psychological symbol that represents a large majority of Indian women today, but also the whole society.

The feminine qualities that Sita represents remain underground and are exiled from our culture. But when we stop nurturing our feeling function, we fail in compassion too, and may collude in collective patriarchal practices of discrimination of women. Woman is the protector of human life and the sacredness of nature. Feminine consciousness in both man and woman requires us to be in touch with our innermost feelings. They give space to empathy and can remind us not to do to others what was done to us. The goddess was sacred at one time and her sexuality was worshipped. We need to restore it and give it back its original power and dignity.


THE MESSAGE OF THE RAMAYANA

What is the message of the myth regarding marital relationships? The psychological questioning of stories as an organising principle of psychic forces within us explains the behavior patterns as expressions of deeply held archetypal complexes. Thus the Ramayana can be seen as a cultural, historical as well as a social-anthropological material laying down the principles for the right kind of behavior of a patriarchal society.

Rama as the ideal king remains the patriarchal ruling principle of a society that continues to pass down these collective values from one generation to the next. It requires that the woman must regard her husband as a demi-god. The ideal of womanhood by the patriarchal society is projected on to Sita, who becomes the perfect role model as partner and mother. She, like the Virgin, her Western counterpart, is sanitized and made out to be - or rather is forced to become - an asexual human, in her capacity as a higher and purer being, but one who is constantly separated from her husband.

Young males while growing up are left with little space to negotiate their own versions of masculinity today with such a dysfunctional role model. How then can the age-old archetypal model of Rama be modified, given our outdated view of sexual morality, which no longer serves as a healthy functioning model for relationships? Have these neurotic quirks of an ancient society seeped into modernity unnoticed? What goal and purpose do they serve? If we do not question them, we may remain in a confused state of guilt and shame, which may only lead further to suppressed and neurotic behaviour which impedes healthy sexual activity.

Sita is symbolic of an archetype that is dimly seen or recognised in our society today. Having achieved a voice of her own, and a need for equal opportunities does not mean that it translates into full equality and respectful relationships. In other words the archetype of the ‘sacred feminine’ is still culturally repressed. ‘A - yodhya’, the literal meaning - a place where there is no war – but the inner war continues. Rama is unable to accept Sita for who she is. It reflects the structure of human relationship pattern that is damaged. As long as Sita remains banished, there will be no peace within the kingdom either. This affects not just Rama, who is but a metaphor for the ruling patriarchal principle within the culture. A‘yodhya’ and its metaphoric symbolism has now changed; its meaning in our present historical period is that of a contentious hot spot of conflict.

We could be in a transformational period right now if we understand the deeper symbolism of the myth. It could mark the end of a dysfunctional paradigm and the start of a new one. The start has to be recognition that to respect ourselves we need to restore Sita as the ruling queen within ourselves so that she can take her place beside Rama in the temples outside as well. The making of new myth – an a new reality -  lies in our hands. 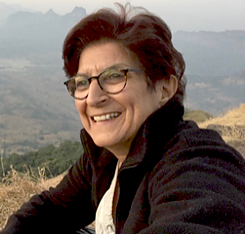 She is author of the book "Psychology of Love - Wisdom of Indian Mythology" (Roli Books 2001) and “The Emerging Feminine – Discovering the Heroine Within” (Yatra Books 2014). Both books sets out the uses of Indian and Greek myths as therapeutic tools for a better understanding in the field of love and marriage and relationships and also a contributor to “In Search of Sita”, (Penguin Books 2009).