Mohan Rakesh penned three plays about three pairs in ASHAAD KA EK DIN (Kalidasa-Mallika), LEHRON KE RAJHANS (Nand-Sundari) and AADHE-ADHURE (Savitri-Mahendranath). In all three plays, the women are at fault. And the men sulk because their male egos have been punctured.

I have always wondered what would happen in 2021, if the three women would meet and chat, and try to sort out the men in their lives. For starters, they would look at Ibsen's notes in A DOLL’S HOUSE in which the Norwegian playwright wrote: “there are two kinds of conscience, one in man and another altogether different, in woman. They do not understand each other; but in practical life the woman is judged by man’s law, as though she were not a woman but a man.”

The wife in the play ends by having no idea of what is right or wrong; “natural feeling on the one hand and belief in authority on the other have altogether bewildered her.”. This is a common theme among the women in the plays of the Big Four: Rakesh, Karnad, Badal Sircar and of course Tendulkar.

Mohan Rakesh, Vijay Tendulkar, Badal Sircar and Girish Karnad were the four pillars of Indian theatre in the 1960s-70s. Just for their contribution to theatre, all four are immortal. Generations of theatrewallahs have been formed in Maharashtra because of his plays!

And so, what shall happen when Mallika and Sundari and Savitri chit-chat in 2021?

I suppose they will agree that the typical woman in a Vijay Tendulkar play is in love with their tragedy. That the women pine and sigh over their sentimentalities. Or madness drives them to the moors. Or sin gnaws at them. Or masculine power is their undoing.

Utterly devoid of humour, they are handmaidens of suffering, saint, whore, witch, or all three at once. Or trouble turns them to stone, they are hardened and embittered, a wordless plaint. Probably, the time has come, as Gunter Grass states to “give the knight of the mournful countenance a woman’s skirt and let her battle the windmills of male prejudice.”

The point is, to understand the men in the plays one has to look at the women. And the depiction of women in Indian plays is very problematic, since there is an absence of feminine consciousness. Male playwrights like Tendulkar didn’t seem to be taking cognisance of the fact that women in this country are oppressed, and are victims of not only patriarchy (SHANTATA, COURT CHAALU AHE) but also caste (KANYADAN), class (KAMLA) and the joint family (GIDHADHE).

The sixties redefined sex in the West. In India, it was more of the same. Man and woman rarely made love, they fucked. Tendulkar underscored this. Sex became vulgar, aggressive, unfeeling, and above all, painful for the woman who was affected deeply by what was happening.

No one seemed to notice. No one seemed to care. I had mentioned this to Tendulkar once. He replied, “It’s true about Lord Krishna too? When he stole the women’s clothes? Everyone thought it to be fun.”

During an interview to theatre magazine PT Notes, Satish Alekar has said, "I am more impressed by the atmosphere Tendulkar's plays create than by the plays themselves. He has been writing, for the past 40 years, plays that break the bounds of the popular, conventional, entertainer. They have generated a whole gamut of emotions and expressions, not only in the state of Maharashtra but all over the country. His plays have provided the fertile ground for the alternative theatre movement to gain roots. He has opened the minds of the audience towards the new. Thus the audiences, though only a section of them, have been receptive to this 'newness' in the plays and some of them even appreciate it. It is not the easiest thing to write plays consistently over the years, while remaining least compromising and loyal to one's belief and not pandering to the popular whims. Tendulkar's integrity has had far-reaching effects. Translations of his plays have made Marathi plays available far and wide. And with the exception of 'Ghashiram Kotwal' all his other plays have lent themselves to good translations. (Especially the Hindi translations by Vasant Dev). One has to inevitably refer to Tendulkar from time to time. The groundwork prepared by him has been nurtured new."

Consider GIDHADE (vultures). Most people would prefer to keep a distance from them. But Tendulkar didn’t.

He cared for the vultures. He placed them on stage, in the living room. The play was penned in 1961 and finally staged in 1970.

The vultures were Ramakant and Umakant, with their lasciviousness and viciousness, plus their sister Manik's vulgar sensuality. Tendulkar made a link between vultures and the veneer of morality that prevailed in middle class Maharashtra.

A perverse saga of domestic violence; and how Manik copes with her desires and her family.

Then there is SAKHARAM BINDER. A play due to which Tendulkar became officially associated with sensationalism, sex and violence. Most of Maharashtra was stunned by the wanton display of illicit sex and misogyny.

​Sakharam Binder brings home the wives who are discarded by others. In Act One, Sakharam drags Laxmi to his home. It's a quid pro quo. Shelter and two square meals in return for all the wifely duties she has to perform. In Act Two, Sakharam brings Champa home. But Champa is no Lakmi. She is not docile nor obedient. In Act Three, Laxmi re-enters the house. The pact becomes three-way. CHampa delegates the household work to Laxmi. But Laxmi’s presence in the house begins to haunt Sakharam. Laxmi allies with Sakharam. He strangles Champa. Laxmi brings a shovel and buries Champa's body. Sakharam is a broken man as the curtain falls.

For all the troubles, the ​Stage Performances Security Board of the government of Maharashtra imposed 32 cuts on SAKHARAM BINDER. This included the elimination of the climactic scenes. ​​ One board member condemned the play for arousing “the passions of dogs and pigs”. Another said, the “no sexually-themed play should be permitted at all.”

​​In 2012, I saw an adaptation of SAKHARAM BINDER. But the sense of terror and the threat of violence had diminished. In fact it was considered comic. This is the scene in which Sakharam kicks the woman in his life. Instead of revulsion, the audience was giggling. They were egging on Sakharam and his antics. There was laughter.

Beating a woman was a spectacle. Feed her to the lions, they roared.

In the 21st century, had Sakharam’s violence become gratuitous?

Perhaps today’s audience do not appreciate Tendulkar’s style? Were the happy audience unable to recognise the title character's debauched treatise about the sacred institution of marriage? Was Tendulkar’s indictment boomeranging and his psychological dimensions misplaced?

Or has gender politics moved on so much, that Tendulkar's plays are no longer an indictment? 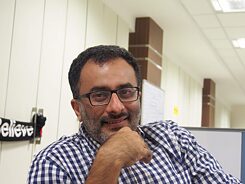 © Ramu Ramanathan Ramakrishnan Ramanathan, popularly known as Ramu Ramanathan, is an Indian playwright-director with acclaimed plays to his credit. One of the most politically conscious playwrights of our times, Ramu’s plays reflect the times we live in. Ramu Ramanthan meticulously researches his projects, historical processes are a cornerstone of most of his writing and both politics and history together form the foundation of his work.​

His list of plays includes the most recent and immensely successful The Diary of a Word, Cotton 56 Polyester 84; Jazz; Shanti, Shanti, it’s war, Comrade Kumbhakarna; Curfew; Mahadevbhai (1892–1942); Collaborators; 3, Sakina Manzil; Shakespeare And She; as well as Postcards from Bardoli.

His plays have been translated and performed into Indian and European languages.​