With dance, one is mostly able to make choices around what form to learn, from whom and how long for and so on. The choices and the choice-making mechanisms are a lot more apparent in the case of dance. Gender training, on the other hand, is something one acquires without actually realizing it. We receive it not just from a teacher, but from all kinds of sources - including parents, relatives, peers, teachers, television, mythology, news, books, music, films and so on. Gender training is a complex system that begins very early on; everyone you meet is almost always your teacher and you begin to perform it as soon as you learn to walk and talk.

© Soumita Bhattacharya
One of my earliest memories of this training system, quite apart from my parents' constant instructions on how to move, speak and be, is a moment that took place in a children’s playground in Chandigarh where I lived as an 8 year old. This was 1988, a few years before Judith Butler* made her celebrated assertions of gender as a kind of improvised performance and decades before I had access to them. A kid in the park exclaimed that I moved my hips side to side like a girl when I walked. When I disagreed with his observation, he called all the other kids over to watch me walk and corroborate whether my hips did indeed move in that way. Right then, as an eight year old, I realised how closely gender was linked to the movement of the body and that gender was something that needed to be performed, very often on demand. Just before I performed my gait in front of the other kids, I distinctly remember putting all my focus into making sure that my hips didn't sway from side to side. I cannot remember what the verdict of the onlookers was, but it took me 25 years to begin to unpack this experience. It was only when I started creating my choreographic work, a male ant has straight antennae, in 2013 that I began to realise the impact that moment in the playground had had on me. I looked back on my formative decades and realized that I had consistency dodged my way around expectations, instructions and corrections from various people on how to perform my masculinity.

As a team of seven dancers, we began to set up a study of masculinity on the interstices of dance, gender and performance. Right at the onset, my intention as a choreographer was to find ways in which I could make visible the nuts and bolts of the gender training we all had inadvertently received. Since dance and gender have much in common, especially since they both rely on complex training systems that prepare the body to perform, dance became a lens through which to study masculinity in this work. Could masculinity, when seen through and as dance, always remain in-movement; perennially in the process of being constructed and demolished? Several questions emerged through this process of working with the body while making and performing a male ant has straight antennae.

© Soumita Bhattacharya
How are different body parts trained to perform the masculine? How do we perform masculinity through the wrist, for instance? And the chest, the hips, the chin and the shoulders? Inversely, when do we know that we may have dropped away the masculine from these body parts? Do we experience an in-built alarm that warns us of our transgressions? How do we perform gender in simple actions such as walking, running, sitting and standing? How is masculinity constructed and performed within these actions? Is it embedded in the way different parts of the body relate to each other? What if the pelvis slips forwards while we walk? What happens if the chest pushes forwards while we stand?

How do we address the ideas of masculinity that reside in the real moment of contact between people? How does gender play itself out on the surface of the skin? When we shake hand with another, for instance, are we performing our masculinity in that moment of contact? Further, what kind of touch puts our acquired notions of masculinity under threat? When I touch someone softly, with gentleness and care, do I experience an inner confrontation with my masculinity? Also, do I put my performance of masculinity to rest in moments when I am not being watched?

© Soumita Bhattacharya
The studio space for this work became much like a construction site, where masculinity could be constructed, demolished, reconstructed, experienced, studied, challenged, unlearnt and performed in several different ways. My relationship with performance also began to shift radically through the process of making this work. Performance is often put forth as an argument. A proposition. An assertion. I began to think whether performance could be imagined not so much as a medium to emphasize and reiterate our existing embodiments, but as a process that allows us to consistently reconfigure our relationship with our bodies. What happens to masculinity when it is performed in this way? 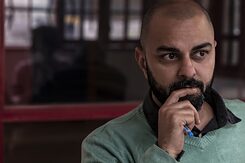 © Chandni Sarcar Mandeep is a dance practitioner with a particular interest in exploring the intersections between dance creation, performance, research, and pedagogy. He began studying jazz at age 19 at the Danceworx, New Delhi, and his subsequent interest in contemporary dance took him to London where he completed a BA (Hons) in Dance Theatre at Laban. He toured with Shobana Jeyasingh Dance Company, London between 2005 and 2009. Mandeep has created several dance works, notably Inhabited Geometry (2010), a male ant has straight antennae (2013), and Queen-size (2016). These works have travelled across the country and internationally over the years including Kampnagel, South Bank Centre, and Singapore International Arts Festival. 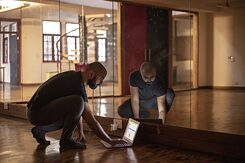 © Chandni Sarcar Since 2009, Mandeep is Managing Director at Gati Dance Forum, where he has worked to develop a supportive environment for contemporary dance in the country through projects as diverse as residencies, festivals, publications, and advocacy initiatives. He is currently teaching as an assistant professor at the MA Performance Practice (Dance) at Ambedkar University, Delhi. This practice-based Masters programme in dance is the first of its kind in South Asia.