Today we present the interview with Narayan Muhuri. 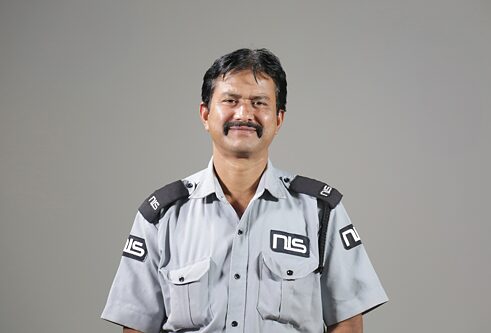 Mr. Muhuri, how did you get associated with the Goethe-Institut?
Initially I had worked for ten years in a company as a messenger and buyer. After that, I started working for my current company, National Investigation Security. They hired me as a Security Guard at a famous primary school in Kolkata. I worked there for two years. The school and the company were very happy with my work. During that time, I also got occasional assignment to work as a Security Guard at the Goethe-Institut / Max Mueller Bhavan Kolkata. And then I have been here since 2011.

What do you enjoy most about your work?
I am one who enjoys working. For me, the workplace is like an extended family. I particularly enjoy being the first point of contact and greeting all institute staff, students, visitors and guests right at the main entrance.

The jury's statement emphasizes, among other things, your special commitment during the Corona-related lockdown in India. How did you experience this time and what were the biggest challenges for you?
I spent eighty-five consecutive days alone at the institute when the lockdown began. That was a challenge. At the beginning, I was very worried about my family, who live in a distant village. I didn't know how to send them the money they needed. After my relatives took care of it for me, I decided to stay at the institute until the end of the lockdown. I kept receiving the necessary instructions and support from the former Director of the institute Mr. Friso Maecker and the Head of Administration Mrs. Leela Chinoy. In particular, I had to take care of the server room, IT room and air conditioning. Since I was the only person in the whole building, I sometimes felt very lonely, of course. But many institute staff members called me from time to time. Also, a former staff who was in the U.S. at that time phoned me from Philadelphia. All this helped me to regain my courage.

Over and above this dedication, you were instrumental in securing the Institute during Cyclone Amphan. How were you able to avert potentially major damage to the Institute?
As I said, I was responsible for the large three-storey old building. That was not easy. The day before the cyclone, I first removed all the plug connections. I covered the computer, the tables and the chairs in the Director’s office with plastic foil. Then I got wire strings and tied some of the latch-less windows all the way down. In the end, I closed all the doors and windows and rooms. During the storm, a big tree was uprooted. Fortunately, it fell across the field from the main entrance. Nothing was damaged. Only the institute’s motorcycle was in the water. I notified Mr. Maecker and Mrs. Chinoy about all this. This was the first relief for me.
Only after two days my family could reach me briefly by phone. On the day of the cyclone, they had to leave the house and stay with my uncle. Later, I was able to make a video call via a colleague's smartphone and talk to my daughter. This was the second relief for me.

The jury honours you together with Ms. Leela Chinoy. What, according to you, makes the team work?
It is a great honour for me. I have never received an award before. I like working in a team. It's also my daily work. I carry out the tasks together with my colleagues from National Investigation Security. During the lockdown, I realized even more, that trust and support are the most important. I am happy that I could fulfil the tasks for the institute.

What do you wish for the future of the Goethe-Institut Kolkata?
Personally, I like the atmosphere of an educational institution. I wish more and more students from other cities in India would come to Goethe-Institut Kolkata to learn the language or take the exams. It is a beautiful institute. If I may also express my own wish, I would like to work for the institute till my retirement.

Thank you very much for the interview, Mr. Muhuri. Once again, we all congratulate you for the award.
Thank you. 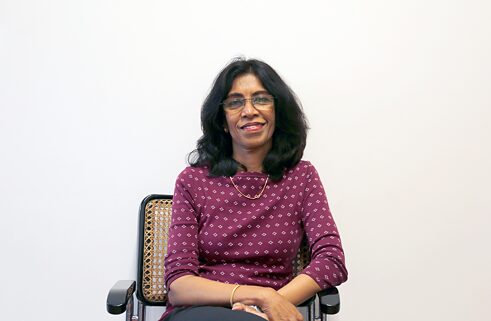 Ms. Chinoy, how did you get associated with Goethe-Institut?
I learnt German at the Goethe-Institut in Pune. When I arrived in Kolkata after completing the course in Pune, I happened to meet the then Head of the Language Department of Goethe-Institut Kolkata at the airport. He made an appointment with me for the next day, and after talking to him and the Director of the institute, I was offered the position of an officer in the programme department.

You have been working at the Goethe-Institut - with a brief break - since 1980. What do you find particularly exciting about your work?
It's different at the Goethe-Institut than in a regular office. Here you are involved in organizing a wide range of events and activities, and the different experiences and adventures have always been very exciting for me.
Especially exciting and the most thrilling experience for me was the relocation of the institute. Here I had the privilege of working closely with our former Director of the institute, Mr. Maecker - the task of finding a suitable location that met German and Indian requirements, where quite a few checks had to be done and reports submitted, getting final approval from headquarters, and being involved in the construction. It is now a great feeling every time to see the admiration of the visitors when they enter the "new" institute for the first time.

In the jury's statement, special mention was made of your commitment during the Corona pandemic and your quick action during Cyclone Amphan. What do you remember most from this eventful time?
The Goethe-Institut here is located in a large, approximately 110-year-old listed building. During the lockdown in West Bengal to contain the COVID pandemic, the institute was closed. Fortunately, Mr. Muhuri stayed in the institute during the three months of the lockdown. All windows and doors - there are more than 100 of them - had to be properly fastened, and the gap under the outer doors was stuffed with cloths. All plugs had to be pulled out of the sockets. We walked around the building together on the day of the cyclone to make sure every area in the house was protected. When the Amphan hit in the evening, I tried to talk to Mr. Muhuri on the phone, but it was difficult to understand him over the roar of the wind and the patter of the rain. So much was destroyed in the city that day. It was very reassuring to see that nothing was damaged at the institute.

The jury honoured you along with Mr. Narayan Muhuri. What, according to you, characterizes good cooperation with colleagues?
First and foremost, trust and good communication; also the belief that we are there for each other, and regardless of small differences of opinion, that we are a team.

What do you wish for the future of the Goethe-Institut's work worldwide?
The Goethe-Institut takes us into the world of German culture and language and enables us to experience it first-hand. I hope that this work - also because of its non-commercial character, especially in the area of cultural exchange - will continue to be valued and supported.