Inspirador
How Montevideo Uses Art to Protect Its Historic Heritage

Every five years, coinciding with the municipal elections, artists, architects, and designers from the city of Montevideo join in an artistic-political campaign parallel to the elections. With a perspective rooted in the artistic field, the project calls for the participation of society to reimagine what life in the city can be like.

#political_imagination
Issues that were already important in everyday life now prove to be urgent, and some ideas developed can inspire us to deal with what presents itself in the best possible way. Creative campaigns and emergency policies have been created to try to influence the future from the point of view of cultural development. In this category, we present design and sustainability laboratories, care culture, forums, and platforms for philosophical discussions about hope, transformation, and political imagination.


The Ghierra Intendente project, which translates as “Ghierra, the mayor,” is a performance-exhibition that discusses beauty, memory, and architectural heritage in the city of Montevideo. The group brings forward proposals that are usually left out of traditional city electoral campaigns, pushing for their inclusion on politicians’ agendas. The collective presents another view on the city, highlighting the role of the residents of Montevideo in this environment.

In the Beginning, the Important Thing Was to Report

Montevideo is not even 300 years old, but in the context of Latin America, it seems older than other cities due to its incredible collection of architecture. However, neither the population nor the public managers pay enough attention to this treasure, and the lack of public policies in the city has become a threat to the preservation of memory.

“It all started ten years ago due to my concern with the systematic destruction of the local architectural heritage,” says Project Director Alfredo Ghierra. The project started making complaints and reports, and that was the point when Ghierra realised that the problems, he was dealing with, were much more complex.

This creates major identity problems. The preservation of heritage contributes to the quality of public space and to the general cohesion of society, in addition to being a huge creative and cultural industry that provides plenty of jobs.

The project was developed organically. In the first year there was an exhibition of ideas and visions for the city of Montevideo, and the success was huge. But it was only five years later, with the boom in social media, that the project really grew. For each campaign, the group has an emblematic slogan. It was “The city we want” in 2015, and “We are the city” in 2020. In that year, the exhibition was split into three aspects: heritage, ecocity, and periphery.

“When you break the connection with what was done by previous generations, you run the risk of losing the historical notion of what it means to build a city.” 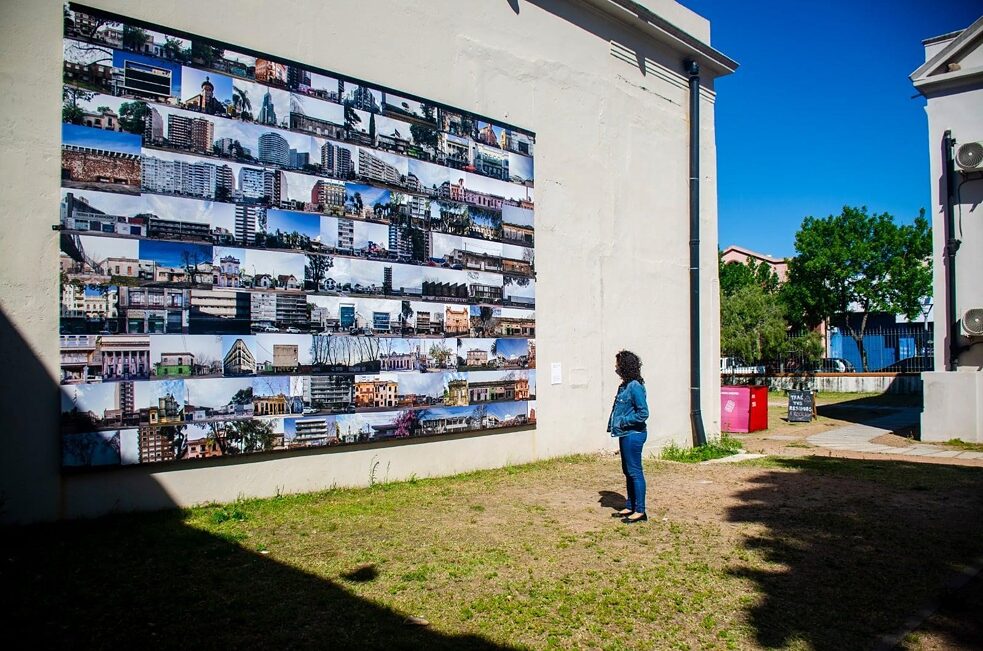 “Montevideo: las dos ciudades” (“Montevideo: the two cities”) by BMR Cultural Producer for the 2020 Ghierra Intendente Exhibition. | © BMR Cultural Producer Currently, there are many people involved with it. One of the biggest concerns of the project when inviting artists, architects, and designers to participate, is to create space for new voices and perspectives to be heard. “Governments hardly count on artists or their approach and we rarely see these professions being part of the government roles,” explains Ghierra.

Beauty as a Form of Action


The main issue with which the project works is imagination, both in terms of creating another possible world and as a way of encouraging people’s participation in the construction of the city. Through exhibitions and other initiatives, the group seeks to create ideas that prompt people to take action.

Ghierra says that, to govern a city or a country, it is necessary to deal with the reality of everyday life but also to plan for the future. This is a very difficult task, and one that demonstrates the complexity of public operations. “What I can’t forgive is the lack of imagination. That’s what we want to insist on: imagination and a lot of humour, too.”

The city, if abandoned to market rules, is deprived of democratic processes. Uruguay has a strong democratic tradition, but a part of the civil society thinks that it is enough to vote in each election and simply pay taxes in the meantime. "Governments are not able to cover the entire spectrum of what a city means", says Ghierra, pointing out that for him, a city is a collective endeavour, in which civil society, citizens and artists have a very decisive role. If society does not participate, the city doesn’t work. The Ghierra Intendente project reveals how artists can use their perspective as a tool to change realities.


The Project Highlights Issues that Were Ignored

2020 marked the third time that the performance has taken place. Ghierra tells us that, interestingly, the last elections were the first time when all candidates included in their political agenda the recognition, preservation and valorization of historic heritage sites in the city. “This didn’t exist before, you know? Everyone advocates for transportation, mobility, waste… but this time they also focused on heritage. Cultural change is always very slow, it is not immediate. It is difficult to measure, but it is worth it.”

By occupying this gap, the group became an interlocutor for the government. Ghierra points out that it took them a long time to create trust with political authorities and for their way of working to not be seen as a joke, but as an important voice.

Mobilisation on social media also caught the attention of the government. A Facebook post done by the group about the demolition of a house received the support of 150,000 people—which is a lot for Montevideo, which has about 1.3 million inhabitants: that number of people can change an election. “I think that this is our power: to have discovered that these issues that seemed minor, unimportant, really do matter to a lot of people.”

For those who wish to start a similar project, Ghierra recommends having a very clear initial idea: “The idea behind ​​Ghierra Intendente is really very simple: it’s to say ‘Come on guys, let’s get together and run a parallel campaign to the real elections.’”

He says that when we love our street and suddenly witness houses or other things we liked being teared down, or trees being removed, our first impression is usually that we can’t do anything, that this is being done for a reason, that someone decided on it. But something different happens during Ghierra Intendente campaigns. People start investigating, reporting, asking questions. It is as if a seed were planted in people’s heads, and they started to believe that change is possible. Artists, architects, and the entire population come together to think and imagine – even more in times of the pandemic, when there is a need to keep distance from each other.

What Is this Series About?

The “Inspirador for Possible Cities” project is a collaborative creation by Laura Sobral and Jonaya de Castro aiming to identify experiences among initiatives,academic content, and public policies that work towards more sustainable, cooperative cities. If we assume that our lifestyle gives rise to the factors behind the climate crisis, we have to admit our co-responsibiltiy. Green planned cities with food autonomy and sanitation based on natural infrastructures can be a starting point for the construction of the new imaginary needed for a transition. The project presents public policies and group initiatives from many parts of the world that point to other possible ways of life, categorized into the following hashtags: