The Ocean As an Art Object
Art As a Translator

The art world can often be very superficial, criticizes the curator Anne-Marie Melster. Through her “Artport_making waves” collective she wants to take a more content-driven approach and illustrate that art, science and politics can complement one another in the area of climate change.

Ms Melster, how did the curator collective “Artport_making waves” come about?

Anne-Marie Melster: Before launching Artport I had an art consultancy and gallery in Hamburg. It all felt so completely devoid of purpose to me. I worked together with major collectors and tried to build up collections focused on content, but this tended to meet with only limited interest. People who are very wealthy and want to establish a big and attention-grabbing collection often have different goals. So I decided to take some time out: the commercial art business wasn’t my world, I didn’t belong there. During my year off I met on a number of occasions with Corinne Erni in New York, who was having similar feelings. We decided to work on climate change because it basically relates to all the issues we want to talk about. In 2005 we established “Artport_making waves”, beginning with small video productions. In 2009 we were then commissioned by various UN organizations and governments to curate an exhibition for COP15 in Copenhagen on the subject of “Women and Climate Change”. The exhibition was subsequently shown in Mexico and the USA.

How did the art world react?

We were not taken seriously by the art world at first. Many people did not understand the topic of climate change – and what that had to do with art. In turn, scientists and politicians, the UN and governments, did not understand what art had to do with climate change. However, our objective was precisely to combine these two areas: to build a bridge between the two and offer something interdisciplinary that would involve artists and scientists, but also young people and political decision-makers. We wanted to get everyone around the table to talk about the subject. The idea was to actively engage civil society, not only via educational and sensitization initiatives. That’s why we immediately established workshops and seminars at schools and universities, bringing together the various stakeholders with a view to creating something active. This was pretty trailblazing as not many of our colleagues were doing anything similar.

With your current project “We Are Ocean”, Artport is part of the UN’s Ocean Decade. How did this come about and what is “We are Ocean”?

“We Are Ocean” was really just the next logical step. Two or three years ago I decided that I really wanted to work on the subject of the ocean at last. UNESCO representatives also suggested at the time that we apply to the UN’s Ocean Decade with the programme. I initially launched “We Are Ocean” in Berlin-Brandenburg. Partners we were able to get on board included for example the Alfred Wegener Institute and the IASS (Institute for Advanced Sustainability Studies). They were followed by Marseille, Venice and Vancouver. “We Are Ocean” is all about discussing solutions to humankind’s negative impact on the oceans; interdisciplinary art-science workshops, panels, performances and conferences are supposed to generate impetus for a new mindset, above all among young people. Sociocultural approaches are very important in this context. We currently have 15 projects underway in the programme, from Oceania to Honduras and Toronto, various European countries and regions, and Nigeria. We want to act local and think global. In Honduras, for instance, we are working with local marine research institutes, schools and artists on the Caribbean coast, where the focus is on rising sea levels. In Northern Europe, i.e. in Norway, Finland and Sweden, as well as in Russia, we are working on the subject of land and ocean and on how this issue is viewed from the perspective of the indigenous Sámi culture. The indigenous viewpoint was already important to us for our project in Vancouver, where we worked together with Cease Wyss, an indigenous artist. 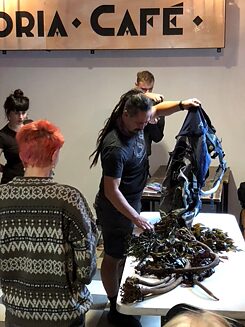 Workshop with Jayson Byles, environmentalist and founder of Eastneuk Seaweed, and students from the Glasgow School of Art. | Photo: © Anne-Marie Melster What makes the ocean such a fascinating motif for art?

The ocean is my great love. I grew up by the sea, learnt to swim in the North Sea, and without the sea I cannot lead the life I imagine for myself. I have long been wanting to initiate a large-scale project relating to this topic. And it is clear that the ocean is a rich source not only of inspiration but also of scientific content, so the artists can make reference to a wide range of scientific issues and above all can work together on an interdisciplinary basis with scientists. Many of our artists are already actively engaged at the interface between art and research.

Why is it the artistic aspect in particular that is important at this interface? What can art achieve as compared to politics and science?

It is language and the visual aspect that is key. Science is always faced with the challenge of how to convey the results of its research to civil society in an understandable way. Science is often like an ivory tower whose content cannot be easily conveyed to those in society who have no scientific background. And the same applies to politics. Politicians use dry technical language, whereas artists can address and convey this in a very different way. In principle, they serve as a vehicle and as translators, mediating between scientists and politicians and civil society. Our artistic projects appeal not only to experts but also to young people, school students – especially those with difficult and non-privileged family backgrounds. Artists engage with them in an entirely different way, helping them to rethink their prejudices, stimulating their creative freedoms and actively involving them as part of an international project. So far, we have succeeded in achieving this everywhere.

The interview was conducted by Natascha Holstein, online editor of Zeitgeister magazine.