In the last two years, Brazil has set a sad new record: 30 percent of the Pantanal ecosystem has been burned in just one year. An artist from São Paulo wants to draw attention to this.

#political_imagination
Issues that were already important in everyday life are now proving to be urgent, and some ideas already developed can inspire us to deal with what currently presents itself in the best possible way. Creative campaigns and emergency policies have been created to try to influence the future from the point of view of cultural development. In this category, we present design and sustainability laboratories, care culture, forums, and platforms for philosophical discussions about hope, transformation, and political imagination. 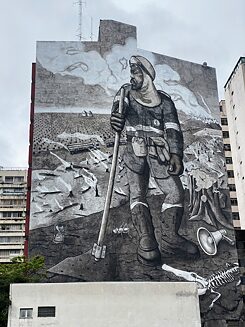 “Brigadista da Floresta,” Mundano, 2021 | Photo: © Sato do Brasil A big artistic panel brings highlights the destruction of the great Brazilian biomes which are literally being reduced to ashes. Every year forest fires are increasing in Brazil. In the last two years, the country has set sadly impressive new records with 30 percent of the Pantanal biome burned in just one year. Ashes, tree remains, and charred animals were the raw material for the palette of the grey paint that was used by the Brazilian “artivist” (a neologism to combine art and activism) Mundano to paint a panel in the centre of the city of São Paulo, called "Forest Firefighter" (in the Portuguese original “Brigadista da Floresta”).

The idea is to feel the pain of the forest.

Mundano, the artist behind the project, “Ashes of the Forest”

Ashes of the Forest had three parts: an expedition, a panel, and a documentary, using artivism as a tool to denounce crimes and raise awareness for the environmental cause in Brazil.

The challenge of the expedition was to learn more about the criminally set forest fires and also meet volunteer firefighters to understand their reality. The journey began in June 2021, when a group of four artivists travelled from São Paulo to the interior of the country. They travelled for 10,000 kilometres and passed through four biomes: the Amazon, the Cerrado, the Pantanal, and the Mata Atlântica.

One important moment of the trip was to meet the São Jorge Brigade, a group of volunteer firefighters that fight to preserve the Cerrado. The activists experienced first-hand the hard work of firefighters and learned about the fire and the forest with them. “The temperature of the fire was unbelievable; I really admired them and was impressed by their work. So, I'm glad that the project is also helping them to get more recognition,” explain Mundano 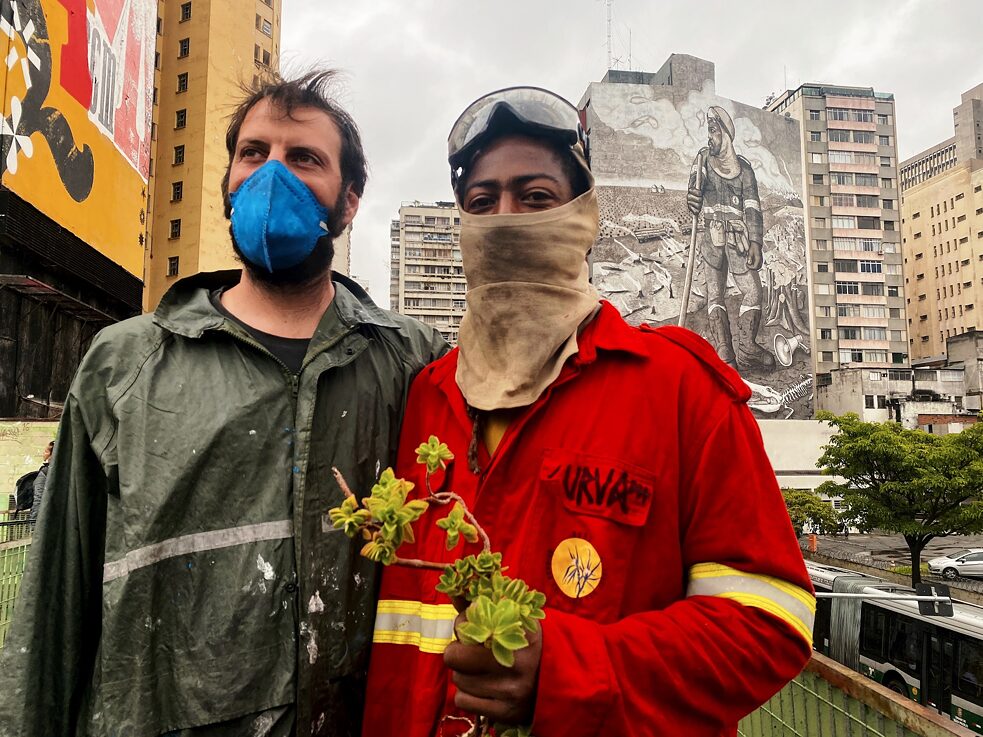 The artist Mundano and the forest firefighter Curva de Vento. | Photo: © André D'Elia The "Forest Firefighter" mural is a call encouraging all to take action now. “We don't have more time. We are also becoming ashes because we are also nature,” says Mundano. But it is not only a protest. The idea is also to honour the volunteer firefighters; the firefighters that put their lives in danger to stop, and to control the fire. They are invisible superheroes that do not have the necessary recognition they need and deserve, and that do not have the support needed for this kind of work.

Paint from the ashes

Mundano created his own paint using the ashes of the forest. It is a primitive technique: humans have been using charcoal ashes to paint for a long time. For example, Serra da Capivara is a national park in Brazil which has the largest and the oldest concentration of prehistoric paintings in the Americas, dating back to as early as 22,000 years ago.

Based on ancient methods, Mundano did his research aiming to create a paint from the ashes by adding water-based varnish to the material. “We are experimenting with the entire process. And when we were using the ash paint, we would achieve quite different results each time. If there is a little more water, or if it was hotter than yesterday, or if we stopped because it started raining, it completely changed the result” tells Mundano. The goal was to create an ink paint that would last as a graffiti painting even exposed to bad weather. 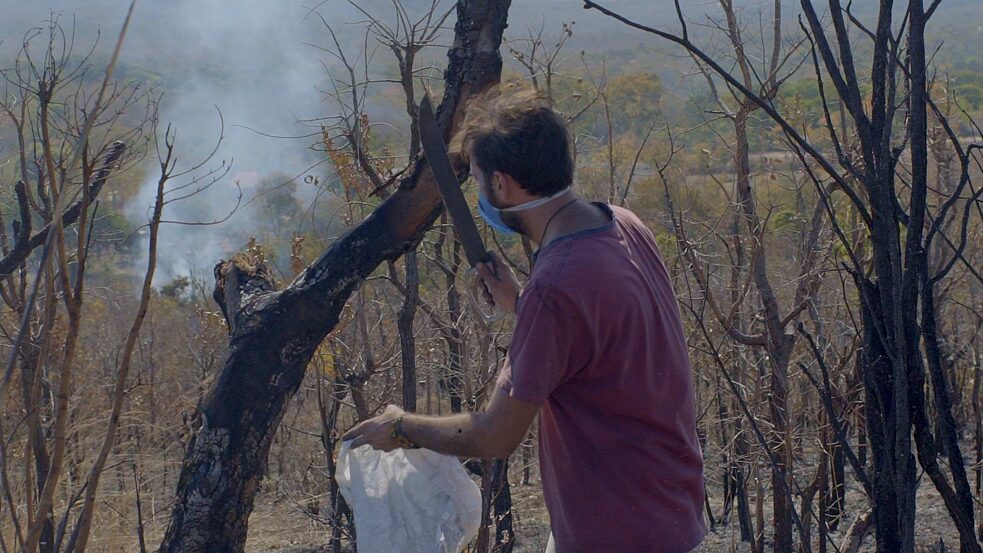 Mundano collecting ashes | Photo: © André D’Elia The "Forest Firefighter" mural is an interpretation of Candido Portinari's painting, "Lavrador de Café", an artwork originally produced in 1934. The original art portrayed a black man representing the workforce from the coffee plantations in the 1030s in Brazil. Now the character is re-interpreted as a volunteer firefighter. The research into the ash paint was successful after two months, and the panel was painted.

"Wastes from environmental crimes are unfortunately an abundant raw material throughout Brazil. Witnessing the forest burnings was essential in the research of the ashes that will become a denunciation in this time of environmental destruction", says the artist. The expedition, the panel, and all the efforts to support the brigades will be recorded in the mini-documentary Ashes of the Forest, directed by André D'Elia, which will be released in 2022.

Using art to denounce social or environmental crimes is nothing new to Mundano. In 2020, the artivist reproduced a painting by another Brazilian artist, Tarsila do Amaral, using toxic mud from Brumadinho, a Brazilian city that became known worldwide for a dam collapse that released a mudflow that killed 270 people in 2019 in Brumadinho, a city in the state of Minas Gerais, Brazil. This panel is called "Operários de Brumadinho,” which can be translated as Brumadinho Workers. The collapse of the dam in Brumadinho on January 25, 2019, was the biggest workplace accident in Brazil in terms of loss of human life and the second biggest industrial disaster of the century. It was one of the biggest environmental mining disasters in the country. 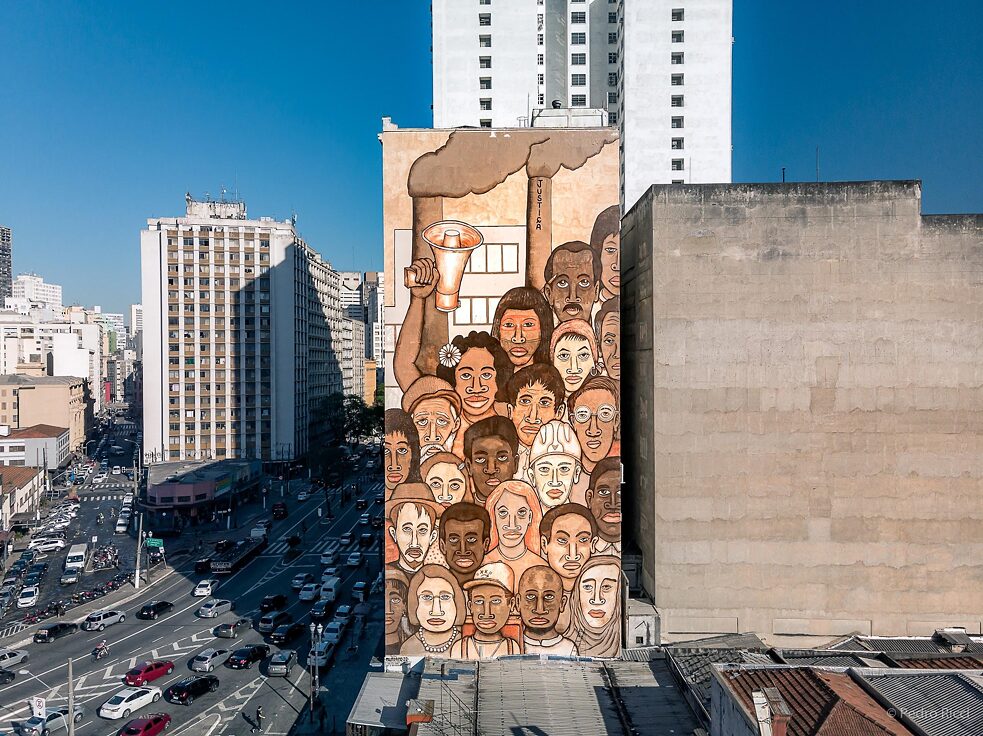 A country on fire

Brazil burned an area larger than England per year between 1985 and 2020, according to a MapBiomas survey. It was 150,957 square kilometres per year, or 1.8 percent of the country. The accumulated area during the period reaches practically one-fifth of the national territory: 19.6 percent of Brazil. Deforestation broke a new record and shows the triumph of Bolsonaro's politics which many people see as an ecocide project. The number is devastating and shows the real Brazil that the government hid from the world during COP26. The total area devastated during this period was 13,200 square kilometres. In the previous edition, the number was 10,851 square kilometres between August 2019 and July 2020. An increase of 22 percent between the two reports. It is the first time in history that Brazil has seen four consecutive increases in the devastation of the Amazon.

About the paint, Mundano says "everything was made with a team. Nobody does a project like this alone. It was like four artists painting". There were more than twenty people involved including producers, artists, and journalists. For funding, they started showing the project to other organizations that are also trying to protect the Amazon, both nationally and internationally. Civil society also donated. There was a mix of people interested amplifying the voice of the forest.

The team spirit also inspired the organizations that supported the realization of the multimedia project. The huge painting in the middle of the city was carried out in cooperation with the São Paulo Secretary of Culture, which authorized the use of public space and provided part of the funding, in addition to support from NGOs such as Greenpeace, WWF and Be The Earth.

The results speak for themself. The project achieved over four hundred large news reports with interviews all over the world talking about deforestation, wildfires, and climate crises. And the results keep growing. "I think the mission was completed", tells Mundano. However, the fires haven’t stopped yet. There's a lot to do. The real goal is to change humanity's behaviour. If we want to save the forest and survive, we must work like a team, and quickly.


What Is This Series About?

The ”Inspirador for Possible Cities”project is a collaborative creation by Laura Sobral and Jonaya de Castro aiming to identify experiences among initiatives, academic content, and public policies that work towards more sustainable, cooperative cities. If we assume that our lifestyle gives rise to the factors behind the climate crisis, we have to admit our co-responsibility. Green planned cities with food autonomy and sanitation based on natural infrastructures can be a starting point for the construction of the new imaginary needed for a transition.

The project presents public policies and group initiatives from many parts of the world that point to other possible ways of life, categorized into the following hashtags: