For sound artist Katrin Emler, aka Katrinem, urban spaces are best explored on foot with open ears, through the lens of her gait’s rhythm. This post looks at her approach to investigating sound and space.

Katrinem, a native of Augsburg, Germany, has spent the last 15 years walking in and listening to urban environments. The resulting collection of artworks is titled Go Your Gait. Her explorations encompass everything from performances to workshops, scores, and texts. A trained violinist and composer, and an avid hiker, Katrinem was destined to work in the intersection of movement, sound, and space. I caught up with her recently while she is waiting out COVID-19 in Berlin.

The most recent addition to Katrinem’s collection is Path of Awareness. It focuses on an individual’s personal experience of urban space through walking carefully curated paths. So far it has taken her to 15 cities throughout Europe, North America, and Asia, for a total of 22 walks. Four more had to be postponed due to COVID-19.

I found Katrinem’s process of creating each path as interesting as the finished piece. That process takes 10-20 days during which she immerses herself into the life of the city, studies maps, notes observations, and walks with persistent repetition. Slowly she “synchronizes” herself to the new city and the shape of the path gradually emerges. Of the final path she says “...it is laid out so one can be attentive to the walking itself [interacting] with the surrounding architectural and atmospheric space.” The result is a variety of melded listening and walking experiences unique to that city. The final artwork includes an audio-visual composition, a score of the path, and guided listening/walking performances with “sounding” shoes. Below an example from Boston. 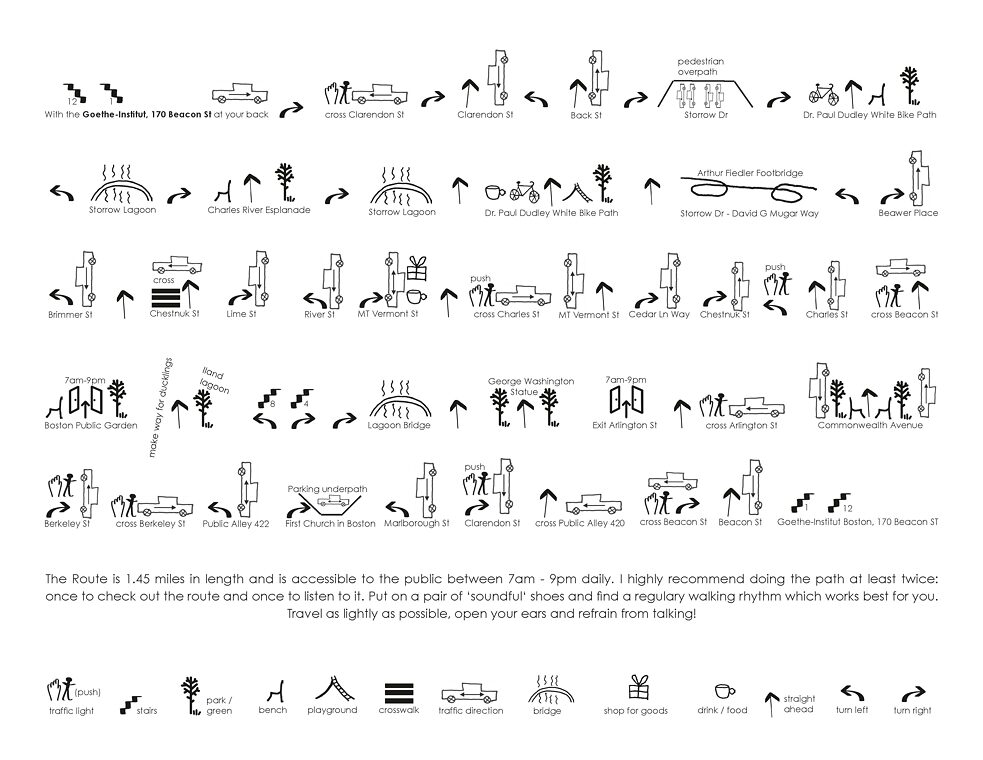 Score to Path of Awareness in Boston | ©Katrinem
I asked Katrinem what excites her about the project. Partly it seems to speak to her pedagogical interests; she is passionate about conscious listening and laments that we appear to have given up on it as a society. She believes hearing is essential for sensing orientation and atmosphere in urban space and needs regular training, just like playing the violin. Paths of Awareness encourages active listening and does this in exactly those urban places most of us rush through on the way somewhere else. “The path itself is the destination . . . The readiness to open up our auditory perceptive space,” she explained.

For Katrinem this is artistic research, in the form of the growing archive of artworks and extensive field notes. In the long-term, she hopes to contribute to a broader understanding of cities and how we interact with them. She sees her contribution as asking questions and initiating discussions around personal experiences from walking and listening on site. She belongs to a group of artists, scientists, architects, and city planners who are exploring how we interact with cities and shape city design, and contributes "felt" knowledge  to the discussions.
.
How has Katrinem kept herself busy during lockdown? Exploring her neighborhood by night, and rediscovering it as a Nightingale center. In the new stillness, she reports hearing otherwise drowned out infrastructure like gurgling water systems. Even as Berlin reopens, she told me she continues to sense these sounds: “even when masked, you can still imagine them...small elements of perception.” During this time Katrinem composed a   which she invites you to try.

Annette of the Goethe-Institut Boston grew up German in America, with solid classical music training and homemade Brot. Her fascination with experimental music/art sprouted while living and performing in the vibrant Berlin of the ’90s