How do you approach reading and thinking about a book that is, mysteriously, called Oval? I stared at the cover of Elvia Wilk’s Berlin novel, flipping it over as if I could crack open some prophecy from the purple egg shape illustration. Taking up the US author’s challenge, I followed form(s): looking for lines, triangles, rectangles, and ovals to reveal some of the book’s themes, from housing to sustainability to inequality. The symbology proved a suitable reading framework for the book’s ominous urban rumblings as well as familiar images of transient expat life in a 21st century “creative” city. Get the book from your library and retrace this four-part geometrically patterned book report or try your own “graphic” approach on your reading list.

In the near future, Berlin’s real estate is flipped in the name of “sustainability,” only to make the city even more unaffordable. Artists are employed by corporations as consultants, and the weather is acting strange. When Anja and her boyfriend Louis are offered a rent-free eco home on an artificial mountain, they seize the opportunity, but before long the experimental house begins malfunctioning.

© Soft Skull Press While Anja develops self-generating architectures, Louis has become obsessed with a secret project he believes to solve Berlin’s income inequality: a pill called Oval that temporarily rewires the user’s brain to be more generous. Oval is a fascinating portrait of the unbalanced relationships that shape our world, as well as a prescient warning of what the future may hold. (Soft Skull Press)

"Wilk's novel is like an ever-expanding sphere . . . It would be beautiful satire if it didn't ring so true." — NPR

The first mention of an oval comes 100 pages into the book: “Years ago, that had been one of [Anja’s] favorite things to do…a slow, horizontal walk around the landing strip [of Tempelhofer Feld] in a prescribed oval under the low sky. The city always receding on the other side of the expanse…a perfectly unplanted plot.” The oval by definition is not a precise term, multi-shaped, malleable, taking the long way round, as opposed to the even, predictable round form—but still a self-perpetuating circular system.

One of the acquaintances moving in and out of the friends’ creative orbit works for an intangible social capital trading app, something like an Airbnb 5.0, “’a trading system for non-monetizable things, like your personal network of connections...Say you have a hookup to rent a cheap apartment because of someone you know…but you decide you don’t want it...But there is something else you really want. Something else you can’t exactly pay for...Plus ones [to get into a club] are big. So are letters of recommendation’…‘Who decides how much these things are worth?’…‘That’s the proprietary part of the app. The algorithm.’”

If you are thinking of Clubhouse and NFTs as imagined five years ago, you are not alone. Wilk, dedicating this book to “My friends,” as a young contract creative in Berlin and now New York knows she is part of that constantly shape-shifting, imperfectly oval new world.

Louis wants to take the idea of a social capital exchange a step further by developing a drug that makes you generous and is thus meant to solve social inequality, as people joyfully redistribute wealth when high. With Anja, he makes the branding decision on the new product in the pragmatic way of the start-up entrepreneur, with an eye on marketing: 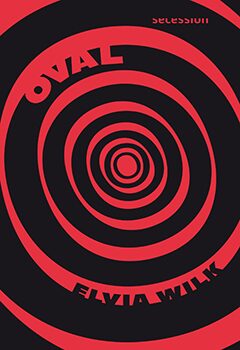 ©Secession Verlag “’Maybe we should go for form instead of content…Circles,’ she said. ‘The shape’s what’s important.’…‘The pill isn’t a circle though.’ ‘A circle is an oval, but an oval isn’t a circle?’” Oval, the drug, envelops all and promises to make it all good. “Friday to Monday was an Oval-shaped binge. Their pupils were Ovals, their kidneys obligated themselves into Ovals, all the loose change in their pockets melted into Ovals and spent itself, serotonin molecules morphed into large and bubbly Ovals…her knowledge that her feelings were chemically induced by Oval even lent a certain righteousness to her acting upon them, a feeling of fully justified liberation.”

And O certainly makes things different, just not as envisioned: “Across the city, a palpable transition, coming from everywhere and nowhere. An uptick in partying, all day and all night. Clubbers sleeping on subway tracks; homeless people making their way into clubs. Rampant displays of generosity, followed by comedowns full of hostility...Nothing was solved, only accelerated.” Things get worse from there.

Jutta Brendemuhl is a curator and writer with a global lens. The trained book editor has a master’s in political poetry and specializes in film and media arts. Jutta programs for EUFFTO, Toronto Arab Film Festival, and the Goethe-Institut Toronto.

Back to "Custom Culture"