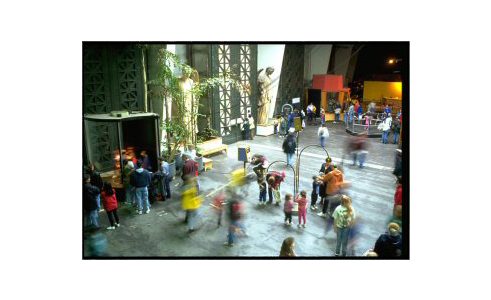 The Exploratorium | Photo: Exploratorium Housed within the walls of San Francisco's Palace of Fine Arts, the Exploratorium is a museum of 600 interactive science, art, and human perception exhibits. This unique museum is an absolute must for all who are interested in those fields.

The Exploratorium was founded in 1969 by German physicist and educator Dr. Frank Oppenheimer, who was its director until his death in 1985.

The Exploratorium's mission is to create a culture of learning through innovative environments, programs, and tools which help people to nurture their curiosity about the world around them.

Frank Oppenheimer (1912, New York – 1985, Sausalito) was the son of German-Jewish immigrants and the brother of J. Robert Oppenheimer, one of the world’s foremost atomic physicists and the atomic bomb project director.

His most important contribution to modern sciences was the invention of a playful, strongly didactic space of scientific discovery for young people. Built around the idea that people should understand the world they live in, the Exploratorium makes it possible for visitors to plunge into the curiosities of acoustics, optical illusions and laws of motion. Featuring more than 600 constantly changing exhibits, the Exploratorium attracts more than half a million visitors a year. It’s been copied by museums all over the world, in China, Japan, France, Switzerland and Venezuela, and contributed to the growing importance and popularity of science centers.