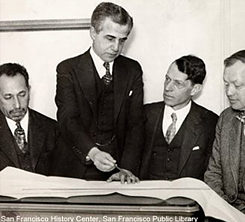 Joseph Baermann Strauss | San Francisco History Center, San Francisco Public Library The Golden Gate Bridge is the most important sight and landmark of San Francisco. In the 1960s, it lost its world record as longest bridge in the world, but it has never forfeited its fascination: it is still viewed as the most beautiful bridge and largest object of Art-Deco-design of all ages. 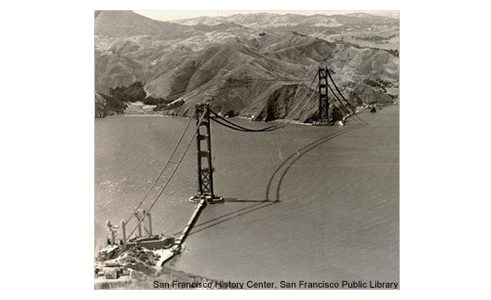 San Francisco History Center, San Francisco Public Library Engineer Joseph Baermann Strauss (1870, Cincinnati – 1938, Los Angeles) was the son of a successful painter from Bavaria. In all, he designed and pioneered work in the construction of well over 400 bridges. His last and crowning project was the Golden Gate Bridge. He had visualized this revolutionary undertaking since the 1920s, but faced strong resistance from various groups in the city. Eventually, the construction was made possible, and began in 1933.

After more than four years of construction, at a cost of $35 million, the bridge was completed and inaugurated by President Franklin D. Roosevelt in 1937. Due to its red colour, tremendous towers, and swinging cables, the Golden Gate Bridge was soon established as a worldwide icon of San Francisco. For more than two decades it remained the longest bridge in the world. Only one year after it’s completion, engineer Joseph B. Strauss died at the age of 68.

Even today the Golden Gate Bridge is an important transportation link. It provides six lanes and can be crossed by car, foot or bicycle. It is visited by roughly nine million people annually.