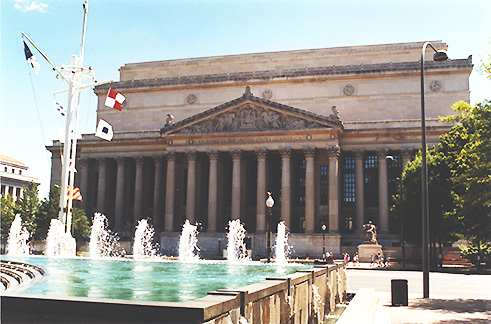 As the National Archives notes: "In Adolph Weinman's highly symbolic pediment for the Pennsylvania Avenue side of the National Archives Building, an enthroned Zeus-like figure "Destiny" is flanked by figures representing "The Arts of War" and "The Arts of Peace." These are surrounded by figures representing "The Romance of History" and "The Song of Achievement." Weinman's theme was that progress is determined by knowledge of the past: knowledge gained through documents held in the Archives."

Adolph Weinman (1870-1952), born in Karlsruhe, Germany, came to the United States in 1880. He studied at New York's Cooper Union and the Art Students League. Weinman studied with Philip Martiny and worked as an assistant with the major sculptors Daniel Chester French, Olin Warner, and Augustus Saint-Gaudens. He opened his own studio in 1904.

Born in Karlsruhe in 1870, Adolph Weinman emigrated to the United States as a ten-year-old and attended public schools in New York. At 15, he was apprenticed to a sculptor and attended evening art classes at Cooper Union and, later, the Art Students League. The prominent sculptor Augustus Saint-Gaudens noted Weinman's talent and later invited the young artist to become an assistant in his studio. Weinman was also an assistant to German-American sculptor Charles Henry Niehaus. Saint-Gaudens was influential in introducing Weinman to the art world and helpful in getting the younger man commissions for various kinds of work creating sculptures and medallions. His work adorns many buildings around the country. In New York, his best known works include the pediments for the Municipal Building (McKim, Mead and White, 1907-1914), friezes for the exterior of the Morgan Library, and the bronze doors fo the American Academy and Institute of Arts and Letters.

He was a member of the American Academy and Institute of Arts and Letters, the Architectural League of America, the National Academy of Design, the New York City Art Commission, and the National Sculpture Society, serving as the society's president from 1927 to 1930. He died in Port Chester, New York in 1952.

Weinman's papers are housed at the Archives of American Art.

These notes summarized from an article by Lois Goldreich Marcus in the American National Biography (1999).