The future of Europe
“We must not lose our democratic framework”

Europe needs to reinvent itself, says Jana Puglierin, programme director at the Alfred von Oppenheim Center for European Policy Studies. In our interview, she talks about how loud Germany’s voice in Europe should be and whether Brexit could result in the demise of the EU. 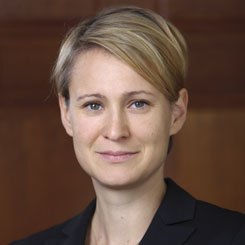 Jana Puglierin is programme director at the Alfred von Oppenheim Center for European Policy Studies | Photo: © DGAP/Dirk Enters Ms Puglierin, the British people have voted to leave the European Union. Is this the beginning of the end of the European idea?

Brexit calls much of what we have achieved to date into question. Until now – and despite all the warning signals – we have always assumed that the process of integrating more and more countries would continue and that the member states all have the same goal: namely the “ever closer union” referred to in the preamble to the EU Treaty. Brexit has shown that this “ever closer union” does not exist.

That does not sound very optimistic. What can the EU do now?

It can promote unity among the remaining members and not allow further countries to fall by the wayside. A new narrative then needs to be created; the European Union must once again be presented as a success story. Although there is some degree of Euroscepticism to be found in Germany, too, the Federal Republic has particularly strong national ties to the EU.

For many countries, such as the Netherlands or Great Britain, the value of the European Union lies in its role as an economic and trading community. For Germany, however, the EU was an instrument after the Second World War by which to achieve national sovereignty and German unity. On account of their fractured relationship with their own history, people in Germany, especially those of the post-war and 1968 generation, felt a particular sense of affinity with the European idea. What is more, the EU has only ever had advantages for Germany so far. That said, the media campaigns about Germany’s role as Europe’s paymaster have also left their mark on us.

A ring of friends

Michael Roth, Germany’s Minister of State for Europe, was recently asked by a class of schoolchildren why Germany has adopted such a passive stance in the Ukraine conflict. Surprised by the question, Roth responded by saying that nobody presumably wanted to provoke a Third World War.

Being liberal democracies, our problem is that we do not wish to employ the same means to which autocratic systems are perfectly willing to resort. It is certainly correct to say that there is no military solution to the Ukraine situation from a Western perspective, so Germany must give an asymmetrical response. Yet there are numerous other possible ways to tie the region to the West. It is clear from the crisis in Ukraine, however, and indeed when we look at North Africa, that the EU’s neighbourhood policy has accomplished far less than had been thought. Originally, the EU wanted to surround itself by a ring of friends and to strengthen and involve these “neighbours of our neighbours” through association agreements and cooperation. Ultimately, one must concede that the plans for eastern and southern neighbourhood have failed.

What about Turkey, another “neighbour of our neighbours”?

Turkey has rapidly turned into a major problem in terms of European neighbourhood. The situation for the EU is problematic. Because of the refugee crisis, essentially all EU citizens are directly affected. The democratic situation in Turkey has deteriorated to an extreme extent, with President Erdoğan increasingly becoming an autocratic head of state. Particularly in view of Turkey’s geostrategic position, however, it is better to have the country as a friend than as an enemy. This does not mean that we should allow ourselves to be blackmailed. It is too early to give up on the idea of Turkey as a potential partner.

Why has the so-called Turkey deal met with such a negative response from the population?

People are aware that German foreign policy has drifted. But the debate is not honest. The German chancellor has long attempted to find a different solution to the refugee problem. Her first choice would have been a European system of quotas, with “hot spots” and refugees distributed accordingly. The Turkey deal was the lowest common denominator upon which the EU member states could agree. Germany took one million refugees, and Angela Merkel was harshly criticised as a result. The German people demanded that she change something. So she did – but now she is being reproached for it.

A number of countries are now openly criticising Germany’s alleged hegemony in Europe.

Germany has the loudest and most credible voice in the EU. It was regarded as the voice of Europe during both the euro and Ukraine crises. The chancellor failed to notice in the refugee crisis that she lacked the necessary support. In the wake of the Brexit vote Germany now finds itself in the spotlight to an even greater extent, though fears of Germany are also growing because one crucial counterweight is missing. In Great Britain, Germany is losing an important ally, and Italy senses its opportunity to fill the vacuum.

Right-wing parties are on the rise in many European countries – not only in Poland and Hungary, but also in France and Germany.

By European standards Germany long remained relatively unscathed by this development, but now right-wing extremism is on the rise here too. The 2008 economic and financial crisis brought the entire system of liberal Western capitalism into disrepute. This has evolved into general criticism of the Western elites – something that is evident not only from Trump’s election campaign in the USA. Many people feel that their fears are not taken seriously, so they are seeking reassurance in simple answers. Nowadays any website can achieve the same credibility as the Tagesschau (Germany’s longest-running television news programme). Attempts must be made to reach out to people again, and politicians must not blame the EU for their own failures. Admitting problems and offering solutions should not mean adopting the suggestions of the populists, however. We must not lose our democratic framework.

Sarah Kanning conducted the interview. She works as an editor in Frankfurt am Main.