The wool industry
The Yarn Rebellion in Ardèche 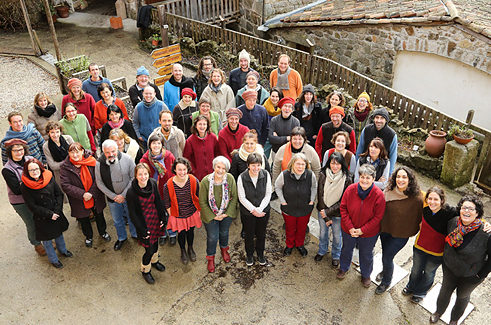 “When shearing a sheep, you need to have the right touch and smooth motions, you’ve got to be in tune with the animal. It’s like a dance.” With a smirk, Gérard Barras adds: “When we started our wool production here, I thought I was too old for shearing, that it was a matter of physical strength. So I never tried, and later I regretted it. Today, even some of our young girls do it.”The cooperative production society Ardelaine is located in a remote part of Ardèche, France, in the 500-strong community of Saint-Pierreville. Gérard Barras, a dynamic man in his sixties, co-founded the coop 35 years ago. In the carding room, he explains how the laundered wool is combed with pre-war, yet still fully functional, mechanical teasels. Large fleeces, made from predominantly regional wool, are stacked in fine, soft layers like ivory-colored snow. Craftsmanship is in the air here, as well as in the adjacent workshop, where wool mattresses are being made by hand. The locally-produced merchandise, from socks to duvets, is sold straight out of the coop’s own store.

Right across, a restaurant and a café-library invite visitors to sample delicious fare, made with local organic ingredients, and to browse a remarkable selection of books. About 50 employees work under the roof of Ardelaine, a portmanteau of Ardèche and the French word for wool (laine) as well as a pun on ‘art de la laine’, the art of wool.

A story of great determination

In the 1970s, many French men and women left the countryside behind to find work in the cities. Béatrice and Gérard Barras stayed. In 1972, the couple happened upon the old spinning mill in Saint-Pierreville, which was crumbling before the eyes of its elderly owners. So Béatrice and Gérard joined forces with three friends, two men and a woman, and set out to restore the mill. It was an adventure with an uncertain outcome, for French wool is considered a rather worthless resource these days. The young pioneers, then in their twenties, had university and professional degrees, yet neither money nor specific skills in the textile industry. They completed the most urgent work without pay and pooled their resources in every respect to avoid unnecessary expenses. “Those years were rough,” Béatrice Barras remembers: growing their own food in their garden, dabbling in agriculture, salvaging every reusable resource – it was a social experiment.

Once the buildings were restored, the growing team began to learn the skills of shearing, collecting and sorting wool, while also building a network with animal breeders in the area. This is how they acquired an expertise that many deem obsolete in this day and age. In response to their evolving needs, they taught themselves other skills, as well: building a power-generating water turbine, different stages of wool processing, making wool-based products and many other things.In 1982, 16 coop members of both genders signed the statutes of Scop Ardelaine (Scop being the French abbreviation for a cooperative production society). The coop’s majority stakeholders are its own employees. The mission of this new endeavor was to fully rebuild a local industry, from breeding all the way to sales, and to do so with a focus on the environment and on job creation to boost the local economy.

The first products – traditional, long-lasting wool mattresses – were sold on local markets and at organic trade shows in France and internationally. As sales grew, the coop was able to hire more staff.

Rooted at home, open to the world

In the mid-1980s, experts from the Armenian community in the Rhône Valley taught the craft of knitting to some team members. Soon thereafter, Ardelaine opened a design studio in a socially disadvantaged quarter of Valence, a 1.5-hour-drive from Saint-Pierreville. The studio is still going strong, and has meanwhile even added two and a half acres of community gardens – a green sanctuary amidst the gloomy concrete. “We do it like Ardelaine, we take care of our own space!” Meriem Fradj is happy to report. She has been co-directing the design studio since 1986 and also started the urban garden project.

From the 1990s, despite commercial export successes, the coop returned to its roots in the region to stay true to its doctrine of stability and proximity over growth. The coop members squarely refused a Japanese company’s tenacious efforts to coax the coop into exporting vests to Asia at hefty prices. Direct local sales and mail-orders are the priority. Ardelaine even expanded its Saint-Pierreville location, adding two museums and a food center to support regional production. In addition to the restaurant and the café-library, this center is also home to a food processing workshop that is open for farmers, butchers and private citizens to use.

Today, the coop’s workforce is predominantly female, spans four generations, and hails from all over France. Many of the women arrived in Saint-Pierreville in a quest to find a more meaningful occupation. “I thought Ardelaine was just another company. Over time, I discovered how it works, especially when they put trust in me and gave me responsibility. You can really make a difference here if you are motivated,” says Christine Hubac, who is also a member of the Scop’s advisory board. More than half the employees are also coop members – everyone is free to join if they wish. Counter to common management theories, each employee has various responsibilities, from shearing to giving guided tours. The salary is slightly above the French minimum wage.

With its peculiar mix of cooperation and tenacity, Ardelaine has accomplished the feat of thriving in the face of massive global competition in the textile industry, because it has been allowed to grow organically, gently, never losing touch with the needs of its regional environment. As Gérard Barras points out: “This adventure persisted because we were resilient, we never stopped trying! Our community spirit has survived, it has prevailed, and it has kept reinventing itself. I think that a solidary community really can survive, even in a hostile environment.”

Ines Grau is a social scientist and works for the Karlsruhe Institute for Technology as well as in international out-of-school education. Previously, she was responsible for the endeavors of Aktion Sühnezeichen Friedensdienste in France.