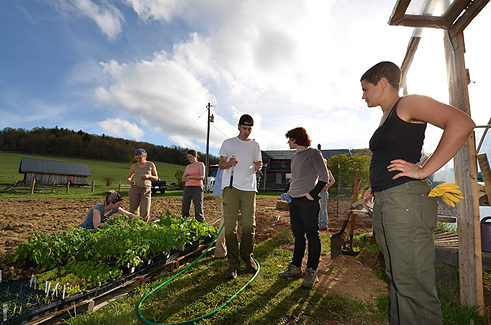 In the 1970s Laurie Berman and her husband bought a farm in Virginia as “homesteaders,” eager to reconnect to the land. When she first traveled through West Virginia en route to the farm, she was amazed and then disturbed by the almost total lack of nutritious, locally sourced food along the way. “My whole purpose in my twenties was self-sufficiency, in the belief that real food meant a healthy life,” she explained. “Now I was going through a part of the country where I saw zero gardens in the yards and nothing but processed food in the stores.” While she was enchanted with the beauty of Virginia’s Highland County—an area with the lowest population of any county east of the Mississippi—Berman was determined to bring a new aesthetic to local means of procuring food. She vowed to return to the old ways and days of locally produced, locally consumed fruits, vegetables, eggs, mushrooms, honey... a way of life that had faded away in the modern consumer society.

A Return to Homesteading

In 2011 Berman decided to take the plunge into expanding her vision of planting a new local food economy in Appalachia by turning her farm into a major educational endeavor. She launched the Allegheny Mountain Institute (AMI) in an effort to attract young people from throughout the country for six-month fellowships on her 550-acre mountaintop farm. At the same time she broadened her endeavor, adding subjects such as small animal husbandry, permaculture design, nutrition, and food storage to her list of offerings. The Fellows who apply for a slice of life in this remote mountain landscape enjoy an authentic homesteading experience that would have been familiar to mountaineers two centuries ago.

The Fellows, generally in their mid-twenties, are given a small stipend and are carefully selected for character, seriousness, and capacity for independent thought and action, as the work is physically demanding and the locale more isolated and rural than any of them are likely to have known. After six months of outdoors training, class work, and communal living, they may choose to take a full year as Senior Fellows—taking their experiences back into the Appalachian community as they are paired with regional partner organizations to build community and school gardens, advocate for sustainable agriculture, and teach nutrition and cooking for a healthy lifestyle. This is what Laurie Berman calls the “mission work” of AMI: spreading the gospel of sustainable food.

Samantha Taggart is a graduate AMI Fellow now in the Master’s program at Virginia Tech’s Department of Horticulture. She heard about AMI when she managed the University of Virginia’s one-acre farm as an undergrad. “In college, I realized that many of the methods we use to raise food in this country—not just animals but also our crops—are linked to an industrialized agricultural system that goes against many of the principles and examples that nature gives us. Through my studies I realized that there was a much better way that we could be raising our food.”This “dream of a more holistic, ecological food system is one of the things that led me to AMI,” says Taggart. Plus, she noted, living communally on a mountain farm “allowed me to connect with some of the more fundamental, intrinsic properties of the world we live in, such as the seasons, the weather patterns, the daily rhythms of animals, and the amazing processes at work underfoot every day."

Working with a Local Partner Organization

After successfully developing their fellowship program, in 2013 AMI established a partnership with the local, 177-year-old Virginia School for the Deaf and Blind (VSDB) to achieve several complementary goals. These included educating students about the nutritional, psychological, and even social benefits of local agriculture; resurrecting the successful and physically challenging tradition of growing and selling local crops in the immediate area; and allowing AMI Fellows to provide hands-on hope to youngsters lacking visual and hearing abilities, which might limit their career options. At VSDB’s campus in Staunton, a three-acre open space has been converted to an intensively managed horticultural farm used to teach VSDB students the basics of healthy, sustainable agriculture. The AMI “Urban Farm” consists of a one-acre garden plot featuring 20 kinds of veggies, an outdoor classroom and kitchen, an orchard with 10 kinds of fruit, and diverse native habitat plantings—all to encourage a more holistic agriculture. Crops grown on the farm are served up in VSDB’s dining hall and sold to local restaurants and schools, in addition to being donated to regional hunger relief agencies.

The students responsible for the farm’s maintenance are from all over Virginia, including urban areas where homegrown meals are scarce. Those involved with the farm have a genuine enthusiasm for farming—even in the hot sun. Each student has a favorite crop to tend: some like picking apples, some pulling carrots, some harvesting peppers and tomatoes. Several students expressed interest in sustainable agriculture as a future occupation. The inculcation of self-esteem, the dignified pleasure of manual labor, and the banishment of the self-doubt and uncertainty that too often limits the life choices of deaf and blind young people are gently promoted in the AMI/VSDB Urban Farm.

By providing area locavores with produce grown under the most exacting of circumstances and by the most enthusiastic of farmers, the Allegheny Mountain Institute’s program with the Virginia School for the Deaf and Blind encourages students with sensory limitations to achieve self-respect, independence, wholesome exercise, and the satisfaction of contributing nutritive produce to the Shenandoah Valley and later to their own homes all across Virginia. This, combined with AMI’s broader efforts, is offering Appalachia a new opportunity to contribute to the region's food security and to rebuild a sustainable economy in the rolling hills and mountaintops of a challenging landscape.

William H. Funk is a journalist, documentarian, and environmental attorney.