Privacy today is not what it used to be. Digitalization is rapidly transforming our world – ranging from individual to governmental relationships - and this provides fertile ground for artists to probe questions such as “What does privacy mean in the digital age?,” “Is privacy a right or a privilege?” and “Which takes precedence – privacy or security?”

Cartoons concisely capture different and new ways of thinking, thereby serving as an ideal medium for conveying various interpretations of a topic and stimulating crucial conversations. Inviting us to reflect upon what seems to be the normal order of things, they enlarge our worldview.

© Ann Telnaes Ann Telnaes is editorial cartoonist for The Washington Post. She previously worked for Walt Disney Imagineering and other studios in Los Angeles, New York, London, and Taiwan. Her print work was shown in exhibitions in the Library of Congress in 2004 and also in Paris, Jerusalem, and Lisbon. Her first book, Humor’s Edge, was published in 2004. She received a Pulitzer Prize in 2001. 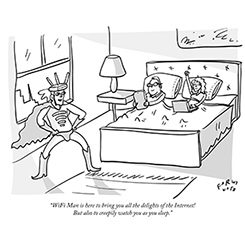 © KAL KAL (Kevin Kallaugher) is the editorial cartoonist for The Economist and The Baltimore Sun. Over the past 37 years, he has created over 8,000 cartoons and 140 magazine covers.  His resumé includes six collections of his published work including Daggers Drawn (2013). In 2015, KAL was awarded the Grand Prix for Cartoon of the Year in Europe and the Herblock Prize for Cartoonist of the Year in the US, and was a finalist for the Pulitzer Prize in Editorial Cartooning. 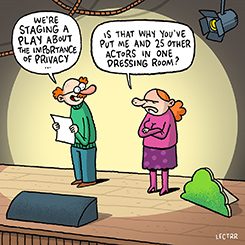 © Lectrr LECTRR (Steven Degryse) is a Belgian cartoonist best known for his daily political cartoons in De Standaard. Over the past decade he has been published all over Europe, both as an editorial cartoonist and a syndicated single panel cartoonist, in magazines such as Helsingsborgs Dagblad (Sweden), Prospect Magazine (UK), Nieuwe Revu (The Netherlands), Veronica Magazine (The Netherlands), Kretèn (Hungary) and others.

© Matt Wuerker Matt Wuerker is the staff cartoonist for POLITICO. Over the past 36 years, his cartoons have been used widely in dailies like the Los Angeles Times, The Washington Post and The Christian Science Monitor, and in magazines including Newsweek and The Nation. In 2010, Wuerker was awarded the Herblock Prize at the Library of Congress and the National Press Foundation’s Berryman Award; he received a Pulitzer Prize in 2012.

© Mawil Mawil (Markus Witzel) is a Berlin-based comic artist. His books have been published nationally and internationally. He works as an illustrator for magazines and newspapers including Der Tagesspiegel, teaches at art schools and gives workshops. Mawil has received the ICOM Independent Comic Prize several times.

© Tom Meyer Tom Meyer’s cartoons have appeared in The New York Times and The Washington Post, and in magazines such as The New Republic and Smithsonian. He is a regular contributor to Capitol Weekly, a website devoted to California politics. Meyer was editorial cartoonist at the San Francisco Chronicle from 1981 until 2009. He has received a Fischetti Award and a James Madison Freedom of Information Award.