The escalation of Berlin’s housing crisis has become exponential, with skyrocketing rents and a growing shortage of flats fast reaching breaking point. I felt the heat first-hand after unexpectedly finding myself in need of a new home.

Finding a place to live in Berlin in the twenty-tens was never exactly easy. Since I moved here around the turn of the decade, there’s always been stiff competition for landing an offer. This was especially true when on the hunt for the perfect crib in one of the city’s bar-laden expat zones, where the curated plants hang at exactly the right angle from the exposed concrete walls and the haircuts are eternally preened to seasonal perfection.

What I’ve experienced on my latest flat search, however, is a rental market of entirely new proportions. The basic takeaway? You should count your lucky stars if you find anything affordable at all. 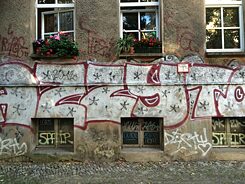 Graffiti meets potted plants in Prenzlauer Berg | © André Leslie Berlin’s edition of the global housing crisis has received no shortage of coverage or protest in recent months, and the response has been significant. In June, the city drafted a controversial new law that plans to freeze most rents at their current price for the next five years, while state housing company Gewobag announced it will snatch back 6,000 apartments from commercial mega-landlord Ado in an effort to help stabilise the market.

For flat hunters who are already seasoned Berliners, the pain of the crisis is felt in twofold: not only should you expect to pay much more money for much less space than before, you’ll also have to battle hundreds of other would-be renters for the privilege of being exploited. The general response to this among my sportswear-clad contingent is captured brilliantly in a meme currently doing the rounds, where a disgruntled-looking dude stands on the street holding a sign that reads: “keep the neighbourhood exactly as gentrified as it was when I moved in 2 years ago”.

Hipster hypocrisy notwithstanding, greedy landlords are greedy landlords. And precisely  because of Berlin’s steadfast hipness, the greediness has spiralled: they’ve got us over a barrel. Consequently, if you find yourself in the position of suddenly needing a new flat, you have little choice but to cough up and embrace the madness of mass viewings that bear a frightening resemblance to The Hunger Games (I’ve legitimately seen people fighting over tenancy application forms).

Nonchalantly rubbing salt in the wound are the brusque real estate agents handling these affairs who, after days of stringing you along intermittently, suddenly ghost you with a callousness that makes even the most brazen of the Tinder community look like a wellspring of communicativeness. And then it’s back to square one: refreshing your immobilienscout24.de page every ten minutes to make sure you don’t miss an ad that gets prematurely pulled after being flooded with too many applicants (one tenant searching a Nachmieter for her Neukölln flat informed me she received over one hundred responses in under one hour of her ad going live).

Thankfully, for me, the nightmare is now over. After ten weeks of relentless searching and endless viewings, I managed to secure a lease this week; though at a rudely exorbitant price. For a great many others, however, the saga continues; and with no easy fix in sight. 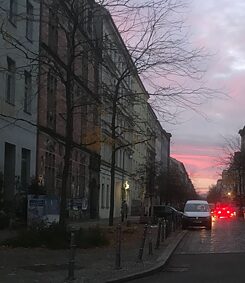 Is the sun setting on affordable Berlin rents? | © Luke Troynar Even at surface level there are problems with the proposed rent freeze, which would provide short-term relief to current renters while potentially making things harder for future home-seekers. Dig a little deeper, and things get thornier still.

While the idea of legally restricting your landlord from squeezing you any harder certainly sounds like a godsend, the history of similar ventures in popular cities around the world is littered with red flags. It will be interesting to see how this history-making piece of legislation unfolds, but the hard truth is that Berlin’s current rental predicament is symptomatic of a much graver and more convoluted global affliction—one that is not entirely removed from each of our own cravings within the Berlin hunger games.