World of Homelessness
​Friday will see yet another funeral

Skid Row is reputed to be one of the most dangerous neighborhoods in Los Angeles. 2,000 homeless people live in tents here. This poses quite a challenge for urban planners and sociologists.

I arrive punctually at 10 am and see sidewalks crowded with tents. There are shopping carts in which the local residents keep their meager possessions. There are pallets of canned food alongside used needles. The caustic odor of urine hangs in the air. Normally, Goethe-Institut invitations see me ending up at smart conference centers, galleries, or theaters. But homelessness, which is the subject of the current project in Los Angeles, is not something that can really be grasped without visiting the streets themselves. I am met by Crushow Herring in front of a tent that he shares with his two pit bulls. He is taking part in the Worlds of Homelessness conference and has invited me to interview him here. When I get there he is sweeping the sidewalk and chatting to neighbors from nearby tents. And I am taken aback – by Skid Row, which is reputed to be one of the most dangerous parts of L.A. yet appears to be simply a friendly neighborhood in Herring’s eyes.

To date, all attempts to clear the tent city in downtown L.A. with its more than 2,000 residents have failed. Writing last year in a UN report about this neighborhood that covers 50 city blocks and has been home to poor and marginalized Angelenos since the start of the 20th century, international law expert Philip Alston talked of “conditions like in the Third World”. Stoically, Herring watches the man from the public sanitation department painting over the yellow graffiti daubed on the wall behind his tent. “Junkie asylum” or “gateway to hell” tend to be the kind of terms used to describe Skid Row by outsiders. But Herring can’t relate to such views: he is here of his own volition – and in fact spends quite a bit more time here than with his wife and kids in Long Beach.

He doesn’t really need to live in Skid Row any longer. Almost 20 years ago he washed up here, a failed basketball player with no job or place to live. Like so many others, he dealt crack just to make ends meet. However, Herring’s contact with social workers and artists in the neighborhood has changed his life. Sooner or later his own art projects met with interest outside Skid Row, and the district’s tough image fascinated gallery owners. All the same, he still lives here, at least some of the time, because he wants to support others. “Perhaps because it was the only place that made me feel welcome at the time”, he says, waving at people, some of whom seem more dead than alive as they drag themselves past us. The staff of drug prevention projects and the employment services also greet the 42-year-old. People outside churches and soup kitchens, sprayers in the park. 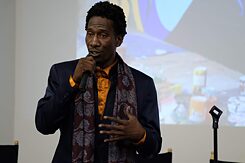 Foto: Khalid Farquharson © Goethe-Institut Los Angeles In the evening, Herring will be sitting on the Goethe-Institut’s panel, and at the weekend he’ll be presenting a music festival. He is always out and about, between hip galleries and neighborhood hangouts, organizing workshops or getting toilets sorted out for the community. His story has almost something of a Hollywood ring to it, though Skid Row isn’t romantic enough for cinema. Many simply end up stuck here: women who are hiding from violent men, addicts who’ll do virtually anything for their next fix, forced prostitutes, trauma sufferers. And yet even they appear to have found a kind of home for themselves in Skid Row. “Homeless shelters give you a roof over your head, but here you genuinely belong”, is how Herring concisely puts it.
Urban planners have long been exploring the phenomenon of informal structures with great interest, looking all over the world for appropriate ways of dealing with the consequences of urban impoverishment. “People who cannot afford a formal place to live will create their own solutions”, write Fabian Frenzel and Niko Rollmann in Germany’s taz newspaper. Admittedly, Skid Row is already the sort of stigmatized ghetto they tend to warn against. And yet out of necessity it is precisely here that the word community comes into its own. “Friday?”, a young woman calls out to Herring as she walks by. “Friday!”, he replies. Yet another funeral.

He wears an electronic ankle tag

Those whose lives are defined by a sense of affluent security look at what is happening in Skid Row with a mixture of sympathy and bewilderment. So far, the better off are still able to breathe easy because the homeless haven’t quite arrived on their doorsteps yet. And yet more and more people in employment are losing their houses and apartments – even the tents of Skid Row are home to many people who set off for the office every morning. According to official figures, 36,300 people in L.A. are homeless. A combination of rising rents, precarious working conditions, and an absence of any social security net is driving people onto the streets, where they are rarely reached by the meager reintegration services offered by the city.
This seriously skews the image of the bum who is drugged up to his eyeballs and responsible for his own decline. “In our society, African Americans in particular, are all too quickly dismissed as all being criminals”, says Charles Porter from the drug advice center UCEPP. “Once they have ended up living on the street, they are perceived only as disruptive factors in society with a negative impact on social order and public spaces.” Herring shakes his head resignedly when he talks about the clean-up campaigns that the police regularly launch to “sanitize” his district and that involve confiscating the few possessions that the residents actually have. We take a detour on our way to lunch because Herring wears an electronic ankle tag and is no longer permitted to pass a certain street. Allegedly he mugged someone there in 2015, an offense he denies – but since he’s been living in Skid Row the police have had it in for him.
That evening, on the panel at Worlds of Homelessness, Herring gives a talk to architects, sociologists, local residents. About the criminalization of poverty, institutionalized discrimination, police brutality – and about the fact that all of this is still waved away all too often as someone else’s problem. Sitting next to him is the German urban planner Barbara Schöning, who explains why Berlin is no longer a paradise for renters with affordable living space either. How prices there have gone through the roof over the past ten years on account of unfettered real estate speculation. And that the numbers of homeless people are also on the rise there – even if the situation is far from as dramatic as it is in L.A. And that tent settlements are generally pulled down in a knee-jerk reaction in any case.

Herring spends four days discussing issues of housing shortages in the USA, Germany, Italy, Colombia, and South Africa. He touches on the extreme differences between the home countries of the invited experts, and applauds US sociologist Hilary Silver when she points out at the end that they all have one key thing in common: the flexibility of the word “home”. “It is not the conventional roof over our heads that gives us a sense of belonging”, she says. “It is the social structures that keep us afloat.”
Structures that are evident in the amazing potential of supposedly “failed” areas like Skid Row, where the community has long been taking responsibility itself for drug withdrawal programs, helping people find jobs or the construction of new shower blocks. That reveals the extent to which the state has failed in view of the deplorable situation at the local level. The distancing of oneself from “other people’s poverty”: I do this myself when I ignore the everyday scenes under railway bridges in Berlin or in front of supermarkets. Yet even outside Skid Row it is choosing to look rather than ignore that surely creates an opportunity: namely to learn from the needs and ideas of “the others”.

Foto: Khalid Farquharson © Goethe-Institut Los Angeles The day after the conference I see Crushow Herring at the Skid Row Arts Festival. He is standing on a small stage and introducing a street orchestra featuring a soloist who used to perform with the Los Angeles Philharmonic. A former member of the Denver Lane Bloods gang is chatting to a fellow thespian in front of a theater company’s stall. Behind them is a previously homeless young man in a uniform who is paying his way through a degree in medicine by working as a community security guard. The residents of Skid Row can be seen swaying to the music between fitness and playground equipment. And this snapshot makes their lives on the fringes definitely seem like more than just poorly disguised anarchy.

Born in 1974, Elisabeth Wellershaus lives in Berlin. She is a journalist who works among other things as an editor for the art magazine "Contemporary And". She is a member of the editorial team on "10 nach 8".