Upon preregistration you will receive an email with a link to watch the short film online.
Please register Masel Tov Cocktail Ingredients:
1 Jew, 12 Germans, 50 ml Culture of Remembrance, 30 ml stereotypes, 2 teaspoons of patriotism, 1 teaspoon of Israel, 1 falafel, 5 Stumbling Stones, a dash of antisemitism
Directions: Put all ingredients into a film, bring to boil and shake vigorously. Then garnish with Klezmer music.
Consumption: Light before serving. Enjoy at the cinema. 100% kosher.

DIMITRIJ Liebermann (19) is Jewish and punched Tobi in the face. Now he’s supposed to apologize to him. But Dimitrij doesn’t exactly feel sorry. While on his way to meet up with Tobi, he encounters a diverse representation of German society. Again and again, Dimitrij faces one struggle he needs to overcome: his German-Jewish identity.
An analysis of the status quo. 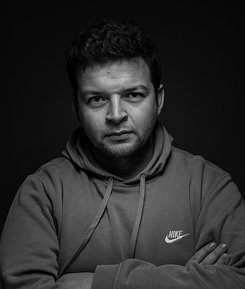 ©Filmakademie Baden-Württemberg GmbH Director Arkadij Khaet was born during the final moments of the Soviet Union. A few weeks after his birth his family left the Republic of Moldova and immigrated to Germany. After graduating highschool he lived in Israel for a while, and then moved to Cologne to start his undergraduate studies in Film and Television. As a student he started to implement his own film projects. He met his co-director and colleague Mickey Paatzsch with whom he started a collaboration on several projects. As of October 2016, Arkadij Khaet is studying Film Directing at the Film Academy Baden-Württemberg and is currently living in Southern Germany.
Misha Vilenchuk graduated from Brandeis University with a master’s degree in Global Studies, and bachelors in Russian, NEJS, and History, and wrote his Master's thesis on the Student Struggle for Soviet Jewry.
After graduating from Brandeis, Eve Litvak headed to Stockholm for a program called Paideia, which is a secular Jewish studies program that brings European students (and, sometimes, Americans) together for eight months of learning.

Presented in cooperation with the Center for German and European Studies, Brandeis University.