GERMAN CINEMA NOW!, a celebration of the bold, new, and fantastic in German and transnational cinema, is a monthly film series presented by Goethe Pop Up Seattle. In 2022, GCN! explores states of (apparent) stasis, sameness, and standstill, inviting viewers to look closely at the countless dynamic processes that are always underway, just beneath the surface.


The screening will be accompanied by a pre-recorded discussion between Goethe Pop Up’s program curator Martin Schwartz and lead actress Lilith Stangenberg.

Registration
About the film:

Driven by a mad grief on the death of her Euridiko/Eurydice (Ian Madrigal), Orpheus/Orphea (Lilith Stangenberg) electrocutes herself, climbs into a columbarium, and sets off, stooped, into an underworld labyrinth, there to beseech the lord of the underworld to return her love to her. We follow her passage through hell, rendered by Filipino director Khavn with endless invention, at street level.

This year, German Cinema Now! is investigating Stillstand – a state of apparent stillness, of stagnation, of sameness: a meniscus, in other words, beneath which the most fundamental changes are afoot. Love is a Dog from Hell, from the polymath Filipino artist, musician, and film director Khavn, blindingly illuminates this theme. This film was shot with the same stars (Lilith Stangenberg and Ian Madrigal), the same inspiration (the Orpheus myth, gender-switched), and the same urban location (Manila) as Orphea (German Cinema Now! May 2021) Khavn’s 2020 collaboration with New German Cinema legend Alexander Kluge. Much of the film material is even the same. And yet the two works are fundamentally different. Even where a scene seems visually familiar—as in a crazed street concert culminating in a burning keyboard—the vibe is different. Here the montage is less music video, more live concert footage. Woodstock ‘99 meets biker orgy.

With his gifts for poetry, music, and visual composition, Khavn surprises throughout. “Hell is a democracy of devils,” we learn. “Blood is the hardest, blood is like stone.” We see different mediums—digital, video—various views, color palates and perspectives changing constantly. Orphea mournfully intones “I’m blind,” in a flaming circle. Like a religious rite that makes magic from scraps, Khavn does much with little, using simple means to extraordinary effect. Pink flip-flops inverted over a pair of ears make a sorceress. Black and white stills against Tagalog poetry. Stop-motion animation with mass-market figurines. Many scenes of dogs. The most powerful effects of all are, of course human, first among them the ferociously committed performance of Stangenberg. This journey—ribald, grotesque, sublime—leaves a mark: “as eternal as a bad memory / in my heart until I die.” 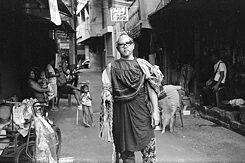 © Khavn As the director of 51 feature-length and 115 short films, author of six books and composer of 23 albums, Khavn is one of the Philippines’ most renowned contemporary artists. His poetry and stories have won him the Don Carlos Palanca Memorial Award. The 2008 Forum screened his film The Muzzled Horse of an Engineer in Search of Mechanical Saddles. In 2009, he was a member of the International Short Film Jury at the Berlinale.

The Filipino Renaissance man Khavn is one of the best kept secrets of the digital underground cinema. Khavn (…) may seem like a foolish punk, but in the end he is also an outstanding rebel.

The enfant terrible of Philippine cinema