A night of music, discussion, and entertainment with star chef Vincent Klink

Vincent Klink is a German chef, restaurateur, author, and publisher of culinary literature. A jazz musician and media personality known for his food-focused television shows, he is a recipient of the Michelin Star and received the Order of Merit of Baden-Württemberg in 2014.

But maybe it is best if he introduces himself: 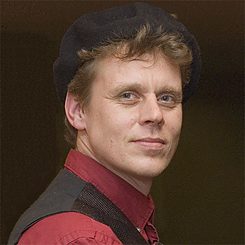 Bram Wijnands was born in Eindhoven, Netherlands, and became interested at an early age in Stride piano, Boogie Woogie, and Ragtime. He is a graduate from the Conservatory of Amsterdam. After having performed at the City Light Jazz Club in Kansas City in 1992, he stayed in the city of Jazz. Bram Wijnands taught for 15 years at UMKC’s Jazz Division alongside with Bobby Watson which led to a collaboration at Jazz At Lincoln Center in 2005 where Bram Wijnands performed his arrangements and compositions in the Kansas City Swing style.

Over the years he has performed with many different artists such as Deborah Brown, Bobby Watson, The Glenn Miller Orchestra, Bob Kindred, Dukes Boys, The U.S. Coast Guard Band, Slide Hampton, Richard Ross, Milt Trenier, and The Scamps. Concert tours include locations such as the Netherlands, Germany, France, Belgium, Russia, Cyprus, Hungary, Romania, and the United States.