The year 2021 marks what would have been the 100th birthday of Joseph Beuys. Widely regarded as one of the most influential artists of his time, Beuys pushed the definition of art to its limits through his ritualistic performances and use of non-traditional materials. For Beuys, art was not an object to be admired and collected but a vehicle for positive social, political, and environmental change.

While the success of Beuys’ transformational goals for art is still unresolved, there is little doubt that his work has left a lasting impact on contemporary art. To celebrate Beuys’ artistic legacy, Goethe Pop Up Kansas City invited four artists to reflect upon his impact on their artistic practice or respond to his works of art.

Beuys’ concern with the environment and conviction that that art is a participatory process can be observed in the work of Karen McCoy and Jarrett Mellenbruch. On the other hand, Marcie Miller Gross and SHENEQUA, like Beuys, work with unconventional materials that resonate with them on a personal level. While eclectic in their approach, all four artists are connected by their unconventional method of approach to medium and process.

Masks are required for all guests regardless of vaccine status. Reservations are not required but no more than ten people can be inside the exhibition space at a given time. 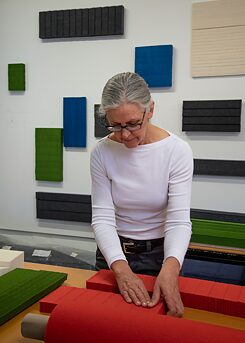 © EG Schempf Marcie Miller Gross makes site responsive objects, drawings and installations informed by the spatial and conceptual conditions of a place. Created through an intimate material connection, her cumulative works made of industrial felt reflect her interest in the traces of time and evidence of people on a place.

Miller Gross has been the recipient of several prestigious awards such as the Charlotte Street Foundation Fellowship and the MidAmerica/National Endowment for the Arts Individual Fellowship, and GlogauAIR residency in Berlin. Her work has been exhibited extensively in galleries and museums throughout the world including Tshinghua University, Bejing, Kunsthal Charlottenborg, Copenhagen, and the Kemper Museum of Contemporary Art, among others. Miller Gross received a Master of Fine Arts at Cranbrook Academy of Art, and has held teaching appointments at Kansas City Art Institute and University of Kansas. 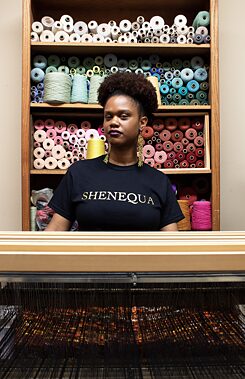 © Kendra Powers SHENEQUA is an Artpreneur who received her Masters in Design for Fashion, Body, & Garment at the School of the Art Institute of Chicago under the mentorship of Nick Cave. Founder of Weave Your Dreams Into Reality Studios LLC. Her last solo exhibition, Woven Narratives, was on view in 2019 at Haw Contemporary (Stockyards) in Kansas City, Missouri. She has exhibited her works in Performing Labor at Patricia Sweetow Gallery in San Francisco, CA, The Space We Grow Into at Woman Made Gallery in Chicago, IL, and Mane N’ Tail at The Luminary in St. Louis, MO, to name a few. A Featured Artist for Ties that Bind in American Craft Magazine 2015 and the Kansas City Star in 2014. A Windgate Fellow of the Center for Craft in 2014, and the inaugural YoungArts Daniel Arsham Fellow in 2017-18, presented by the Ridinger-McLaughlin Family. 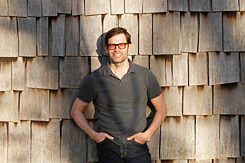 © Talis Bergmanis Jarrett Mellenbruch is a transdisciplinary artist with a public and socially engaged focus. His work spans a variety of mediums with an emphasis on public sculpture and research intensive socially engaged projects. Integrating divergent approaches into a conceptually elastic framework, he explores ways to cross-pollinate work between fields, in particular between his lifelong passions for art, science and ecology. Mellenbruch is a native of Kansas City. After finishing his undergraduate studies at The Rhode Island School of Design he lived and worked for twelve years in New York City and later earned his MFA at the Maine College of Art in Portland Maine. He now maintains a full time art practice and teaches sculpture at the Kansas City Art Institute.

© Tom Styrkowicz; Courtesy Kansas City Art Institute Karen McCoy is a multi-disciplinary artist, educator, and environmental activist whose work focuses on the ecological plight of our planet. McCoy received her MFA from the School of the Art Institute of Chicago and has taught at Colby College, Williams College, and the Kansas City Art Institute. Her artwork has been exhibited worldwide and featured in a number of publications, including John Beardsley’s Earthworks and Beyond (1998) and Paul Cooper’s Gardens without Boundaries (2003), among others. Most recently, she created a site-specific installation with the European Culture Centre for the 2021 Venice Architecture Biennale. Entitled the Floating Garden for Venice, the sculpture takes the form of an earthworm, woven from hazelnut branches and planted with salt tolerant edible plants. This work, along with an accompanying workshop series about making from plant materials, composting and gardening at home, encourages us to attend more carefully to all that is taking place around us, and our role in it.