How Is German Learnt? Language Learning as a Process of Internalization
The Language of Others 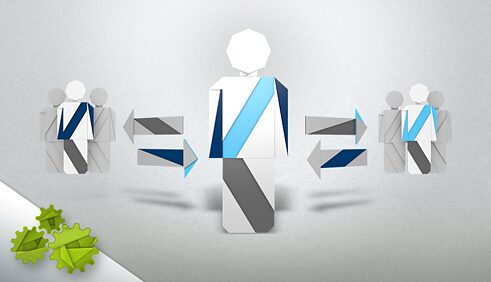 The Language of Others | Illustration: Melih Bilgil

We always learn the language of others. Engagement with the language environment in question is the engine which drives the development of language, but how does this work in practice? And how can this knowledge be used to help us learn a foreign language?

This article examines second language acquisition from the perspective of “sociocultural theory”, which regards learners’ engagement with their environment as a constitutive element of the language development process. After basic terms have been explained using the example of first language development, it will then be shown how this approach changes the way language learning is viewed when it comes to second language acquisition and foreign language learning.

Learners develop language by engaging with the sociocultural environments in which they live. During this process, they acquire – more or less successfully – those linguistic abilities which will largely determine their ability to act within the respective sociocultural environment and thus their scope for participating in it. Language learning can thus be regarded as a process in which the reciprocal relationship between the language learner and his or her environment is reorganized (cf. Lantolf/Thorne 2006:154f.). During the course of this process, described by the Soviet psychologist Lev Vygotsky as “internalization”, the individual acquires increasing control over his or her innate mental faculties, e.g. his or her memory and cognitive ability. The fact that intermediary artefacts which are formed and used – such as language, numbers, concepts or theories – are incorporated into cognitive activity from outside, that is to say from the sociocultural environment, gives rise to higher cognitive abilities which allow humans to control their own behaviour and the behaviour of others. Such functions include naming things and thus drawing attention to them; using a numerical system to count things rather than one’s fingers, essentially giving one access to an infinite range of numbers; using language, numbers and theories to create fictitious situations in order to define common goals or plan actions.

THE EXAMPLE OF FIRST LANGUAGE DEVELOPMENT

An infant, for example, is able from the age of roughly nine months to use simple words like “ball” or “there” to attract the attention of his or her caregiver to objects and events around them. In turn, the caregivers interpret these initially holistic utterances and guide the infant’s linguistic behaviour by attempting to differentiate between possible meanings (“You want to have the ball?”). The infant is thus able to adopt linguistic structures sequentially to the extent that the caregiver gives intuitive consideration to the infant’s “zone of proximal development”. This means that they use those linguistic structures which are accessible to the infant at his or her current stage of development. This allows the infant to internalize the assigned structures and meanings and to use them to control interactions with his or her environment in a more precise and nuanced manner (“have ball”, “want have”).

This example illustrates that language development takes place on both a structural and semantic level in a process which primarily involves adopting the language of others, and that it is accompanied by the development of an ability to achieve intersubjectivity. At around the age of two, children begin to internalize linguistic structures which they can use to refer to things and events which are not currently accessible to them in terms of place or time (“I want to play with my ball at the playground tomorrow”). This allows them to develop the ability to express their needs, rules of a game or plans, and to respond to the demands of others (van Lier 2004).

Naturally, this development, which has only been outlined above, is considerably more complex in infants growing up multilingually. Such children must engage with various sociocultural environments during the course of their multilingual development – learning to develop different potential ways of acting and forms of participation and learning to coordinate these in everyday life (cf. Gogolin: Multilingualism as Starting Point and Goal).

Whereas phases of intersubjectivity evolve over the first four years when a child is acquiring its first language, a person attempting to acquire a second or foreign language is confronted with them all at once. The experiences gained from the first language cannot be simply transferred: as Vygotsky explains, they must be acquired from scratch through engagement with the target language environment and thus as part of the learner’s language biographical development (cf. Maas 2008). This can be proven empirically by studies which focus on second language acquisition from a biographical perspective.

Ohm (2012, 2008, 2007) uses the example of a German student in the USA to illustrate that a second language biography evolves in mutual conjunction with the development of learning strategies and with a focus on the linguistic forms relevant to language development. In the first phase of his contact with target language speakers, the student was regularly recognized and positioned as a non-native speaker on account of his school-level English. The focus in this context was on linguistic forms typically used in specific situations (“How do you do?” rather than “Hey! What’s up!”, the salutation expected by his peers). So as not to stand out, he made a point of adopting such colloquialisms. His strategy was to imitate the linguistic practices he observed in places like the refectory or during seminars. Clearly he was largely successful in using his acquisition strategies to move within his “zone of proximal development”, and by internalizing target language conventions to reorganize his interaction with his sociocultural environment to such an extent that he was able after a certain period of time to “pass as an American” among target language speakers.

Numerous studies have also resulted in negative findings, however, claiming that learners, despite their best efforts, often have little or no opportunity to develop their second language in their target language environment. For example, target language speakers frequently use the second-language abilities of immigrants not as the starting point for ensuring successful communication but as a way of deciding whether they are worth talking to (Broeder et al., 1996). Thus immigrants are not infrequently deemed unsuitable conversational partners by a kind of social consensus. One of the consequences of this is that conversations with them are avoided or that little effort is invested in maintaining such conversations. On the other hand, it is assumed that immigrants are responsible for ensuring sufficient understanding and for maintaining the flow of conversation.

Immigrant second language speakers are thus placed in an impossible situation: they require language skills in order to be able to communicate and improve their life prospects, yet they have little or no access to the communicative practice they would need to improve their skills. To be able to participate in target language communication, second language learners therefore not only require sufficient communicative abilities but also need to be provided by the target language environment with opportunities to communicate that lie within their “zone of proximal development” and thus allow them to reach this degree of competence in the first place. Whether immigrants are able for example in everyday conversations with a tradesperson or landlord to demand such opportunities will depend to a major extent on whether they have the requisite strategies to do so. For this reason, some researchers call for German lessons for immigrants to systematically observe, document and reflect upon the possibilities for interaction with target language speakers (Norton 2000).

THE CLASSROOM AS SOCIOCULTURAL ENVIRONMENT

The possibilities for participating in a target language community are extremely limited when learning a foreign language in a controlled setting outside the target language country. In extreme cases, learners may have contact with the target language and authentic texts solely via the teacher – who may not even be a first language speaker of the target language – and via textbooks and other media. The lack of target language environment can hardly be substituted by task- and activity-based teaching or opening and open lesson forms (role plays, project work etc.), nor by interlinking the classroom with other “settings” (cf. Ohm: Settings for Learning German).

Following up on these and other studies, it was proposed that the concept of the “zone of proximal development” be adapted didactically and methodologically to foreign language lessons (cf. van Lier 2004). Accordingly, the classroom should be designed as a sociocultural environment which creates a large number of opportunities for “proximal developments”. Such opportunities take advantage of the entire range of interaction forms that are possible in the classroom: learning with more competent persons (teachers or more competent learners) may be productive for some purposes, while joint learning with a person on the same level may be productive for other purposes. Learning alone may also be effective if this activates the learner’s resources. The idea behind this is that foreign language learning is particularly successful and lasting when learners are confronted in experience-based and collaborative learning situations with opportunities which require them to use their target language resources – such as is the case in task-based or project-based lessons.