The panellists agreed: “We need to approach others even more.” Approach target groups that haven’t yet been reached, approach new or existing partners worldwide, approach other European cultural institutions. The uncertainty that they are presently confronted with in the scope of political, social, ecological and economic developments is an inevitable part of European and global realities. The speed with which changes are taking place will increase in future. These challenges can be met only in close cooperation of the actors who support open, free and tolerant societies, arts and sciences.
The reason for the discussion in Brussels was the publication of a study jointly commissioned by the British Council and the Goethe-Institut, conducted by the Hertie School of Governance in Germany and the Open University in England. The study analyses the effects of cultural relations in societies in transition, using the example of the work of the British Council and the Goethe Institute in Egypt and Ukraine. 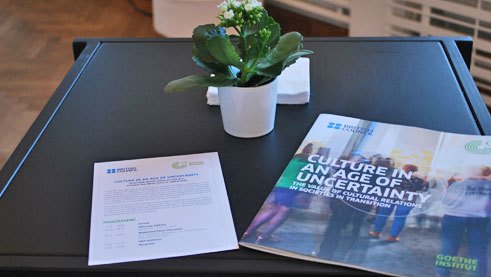 Culture can facilitate a conversation about controversial topics that cannot be addressed in other contexts. This leads, for example, to the deepening of relationships and the development of trust within societies and across national borders, as in the case of Great Britain and Germany. This was Sir Ciarán Devane’s response when moderator Gitte Zschoch, head of EUNIC Global, the network of national cultural institutes of EU Member States, asked why work in transitioning societies is important and was chosen as the focus of the study. According to Johannes Ebert, the study emphasises that a dialogical, collaborative approach to work around the world and the networking of actors are effective and that the Goethe-Institut wants to continue pursuing and expanding these approaches. Kateryna Botanova emphasised that the role of international cultural organisations and of culture in general is not necessarily that of conflict resolution. Rather, they should address conflicts, make them visible, and enable a productive dialogue between conflicting parties. Although, as Botanova notes, the data on which the study is based were collected in 2017 and are no longer fully accurate in the case of Ukraine, they draw important conclusions from this for the work of cultural organisations in Europe and beyond. The participants in the discussion cited another important finding of the study: that international cultural organisations must communicate goals and expectations more clearly in the individual projects and find mechanisms to ensure the sustainability of established networks.

Outside the cultural centres

There was also discussion about how cultural activities can reach and include populations outside the cultural centres and culturally savvy milieus of a country. “We are better at networking actors worldwide than bridging trenches in our own societies,” Sir Ciarán Devane said. Johannes Ebert added that although the Goethe-Institut increasingly addresses cultural actors in smaller and medium-sized cities and conceives projects aimed at linking them together, that this can only be considered a beginning and the activities could be further expanded. As an example he described the Freiraum project, in which Goethe-Instituts in 42 cities of different sizes explore European issues with their partners from culture and civil society. 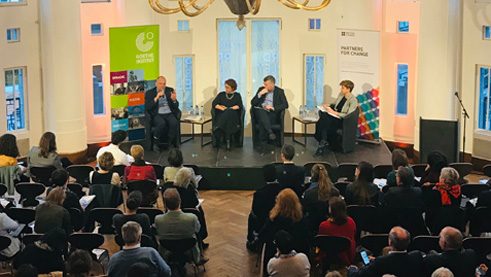 It took longer than expected for Brexit to be brought up, which then lead to the topics of uncertainties and the rise of populism in European countries. Moderator Gitte Zschoch asked the panel what cultural cooperation in Europe might be like after the Brexit. The panellists agreed that cooperation should not decrease with the Brexit, but that they wish to strengthen it even more. According to Johannes Ebert, projects need to be created in general in which Europe is once again linked to positive emotions and, as Kateryna Botanova added, make use of the space that culture creates to test and implement visions.

Publication of the study