Interior view of the der oilrig installation by Marco Montiel Soto in the Kapellhaus next to the German church in Baku | Photo: Adil Yusifov

In Baku, ten international artists are probing the curses and blessings of oil. For millennia, natural gas and oil have been part of the national culture in Azerbaijan. An exhibition by the Goethe Center Baku is now devoted to this history

Azerbaijan is the country where industrial oil drilling was invented. By the late nineteenth century, fortune hunters came to Baku in search of the black gold, but also bankers and industrialists like the Rothschilds and the Nobel brothers. Today, oil and gas are mainly extracted offshore. But the old Russian pumps still set the pace in the suburbs of the city. 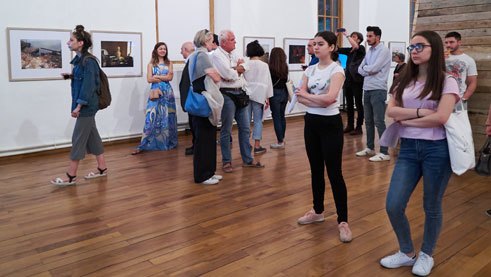 Poverty amidst the wealth of oil

The exhibition "From Prometheus to Petroleum" in the Kapellhaus next to the German church in Baku builds on these ancient myths. But curators Asli Samadova and Alfons Hug, the director of the Goethe-Center Baku, expand the perspective beyond national borders by selecting ten international artists.

In the centre of the hall, Marco Montiel-Soto from Venezuela has set up an historic wooden derrick. His hometown of Maracaibo is presently being destroyed by the monoculture of petroleum. Since the fast money has marginalised all other sectors of the economy, residents often have to queue for hours for petrol and groceries. Nigerian artist George Osodi draws an even darker picture in his gloomy slide show. Corruption and armed gangs are channelling the money from oil exports into the hands of the few in Nigeria. The plundered landscape looks like a smoking inferno. 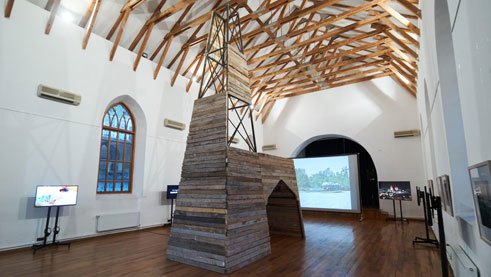 A cup of oil in the teahouse

When asked where the money from the oil boom is flowing, people in Azerbaijan discreetly point at their pockets. But the cultural scene and infrastructure also benefit from it. Visitors to Baku first pass by the chic white sport arena, then the ostentatiously curved cultural centre of Zaha Hadid. A rail connection from Baku to Istanbul is planned. Orkhan Huseynov pokes fun at the nation’s new heroes, the construction workers, in his pithy video. Two construction workers sit in a teahouse in orange overalls sipping cups full of thick, black oil.

The animated film by Samir Salahov is about light Naftalan oil, which is extracted in the mountains. Naftalan is said to have healing properties. Those who believe it bathe in the oil. Samir Salahov tells the story of the war between the Russians and Japanese when soldiers always carried a bottle of Naftalan to rub on their wounds. In the cartoon, they are miraculously healed in seconds. The exhibition deftly demonstrates the positive and negative effects of the black gold. In Baku, we can see how bruised the earth’s thin skin is.

"The Theft of Fire – From Prometheus to Petroleum" is an exhibition by the Goethe Centre Baku at the Kapellhaus next to the German church in Baku. It can be viewed there until 30 June 2019.