Abolishing gender inequality in India is a challenging task as patriarchy continues to hold sway as the dominant organising principle. Nonetheless, initiatives that actively raise awareness are changing perspectives in society and the issue is finally being acknowledged and discussed on a larger level. Christina Furtado, Executive Director of Equal Community Foundation, a non-profit organisation that engages boys in the conversation on gender equality with the aim of ending discrimination against women gets into a conversation with Goethe-Institut to discuss the subject.

Gender inequality at all levels is suffused in the Indian culture and religions. How complicated/easy is it to involve different communities over the debate?

Gender inequality stems from patriarchy, which has penetrated virtually every social system - be it religion, nationality, ethnicity, caste, class, etc. Historically, gender-equality has been seen as a ‘women’s issue’ and has also erroneously been understood as a ‘men’ vs. ‘women’ issue. Generally speaking it has always been a challenge to make gender-equality a priority for any community, irrespective of caste, class or creed, especially when you are trying to engage boys in the conversation to make them a part of the solution.
Our organisation focuses on engaging boys in a structured process to enable them to identify, challenge and change gender norms and we have found that once we engage process boys in this process and they learn about and reflect on concepts such as human rights and gender they are able to identify discrimination and violence easily, which helps them transform their own attitudes and behaviours. So while it is challenging to initiate these types of programmes, as the impact becomes evident the community starts to support the programme.

The education on gender equality should begin at primary level but the Indian education system lags behind when it comes to such topics.

As an average child spends a significant amount of time between home and school, we can say that parents and schools could actually play a more active role in raising gender equitable children. We have some excellent models of how school systems can be involved in this process. Some of the models include GEMS Maharashtra by CORO and ICRW, Taaron ki Toli by Breakthrough, GEMS Rajasthan by ICRW, and “Transforming Men-talities” by UNESCO & ECF.  These initiatives have successfully shown that engaging teachers in the process, using a human rights-based curriculum, and promoting critical thinking skills are highly effective in building gender-equitable attitudes in children.

Gender norms contribute to gender-inequality in every social unit -- family, peer groups, professional groups, etc. Norms that objectify women and give social sanction to inappropriate ways for managing attraction often contribute to sexual harassment and other forms of violence. Similarly, norms that vest the family’s honour in girls, and promote the notion that ‘men can take away someone else’s family honour through violence against their women’ also contribute to how and why parents try to ‘protect’ their daughters.
Our approach has been to raise awareness among boys about how norms are socially constructed and how they can be changed. We focus on enabling boys to recognize that violence against women is not a natural trait but it is a learned behaviour that stems from patriarchal gender norms and those norms that violate human rights can and should be changed.

The PCMC police recently had organized a workshop where 18 police stations in PC counselled 234 delinquents who were accused of various sex-related crimes. Though, it was one-of-a-kind initiative, fewer efforts are being taken in Pune to counsel boys to make them understand the difference between ‘masculinity’ and ‘power’.

It is true that there aren’t enough structured efforts to engage boys in gender-transformative programmes and that one-off counselling events may not be enough to transform attitudes and behaviours, but nonetheless, as long as we begin to address the impact of patriarchy on our lives even a small step like this is a step in the right direction. We definitely need to create more opportunities for boys to understand how patriarchy shapes their attitudes and behaviours so that they begin to recognize that they are not naturally inclined towards violence and discrimination, that they can choose to express anger, attraction and manage rejection in constructive ways.

How can we tackle the growing vulnerability in the youth?

Vulnerability of youth, in general, is a fairly broad issue. We’re in a critical phase now with the emergence of social media, rise of OTT programming, pressure from influencers, etc. Youth are facing a different kind of existential crisis where they are trying to balance traditional values with the pressure of social media; finding out who they are as individuals versus falling into the consumerism trap.
The resolution of any social issue requires a combination of efforts from multiple actors. Rohini Nilekani’s (one of India’s leading philanthropists) framework of Samaaj, Sarkar and Bazaar is an effective framework to think about this process of social change.
As part of Samaaj - the family, education system, non-profits etc need to promote equitable gender norms among youth, promote a healthy environment for dialogue to get them to reflect on various social stimuli and behavioural choices.
As part of Sarkar the government needs to promote legislation that challenges inequitable gender norms, particularly around parental leave, unpaid care work, etc.
And Bazaar, instead of blindly promoting consumerism, should shoulder the responsibility of promoting gender equality through employee policies, hiring policies, media campaigns, etc.

How feasible is it to involve the youth from rural Pune in the programmes, where there is limited awareness on gender impartiality?

There are reputable organisations including MASUM and SAMYAK which are working actively to engage youth in the Pune district in conversations on gender equality. These organisations also work on a gender-transformative approach, which is focused on going beyond sensitisation and awareness to transforming gender norms. More funding needs to be directed towards this work. Over 60% of CSR funds are directed towards Education and Skill Development initiatives which are targeted at children and youth. If these initiatives include a gender-transformative component for boys and girls in their existing programmes they would find that norms around sharing household chores, tolerance of domestic violence, normalisation of sexual harassment would change and consequently, female participation in the workforce would increase.

What sort of changes have you noticed in the attitude and the temperament of the participants involved in the gender equality programs?

We have been implementing a structured gender-transformative programme for adolescent boys in low-income communities in Pune since 2009. We have found that boys respond extremely well to the human rights approach and as their critical thinking and communication skills develop over the course of the programme they develop the courage and ability to transform their behaviour. After the start of the programme, boys begin to share household chores, advocate for their sister’s right to education, their communication with family members improves and they tend to focus harder on their education. We also find that their interaction with girls in the community changes and they refrain from engaging in sexual harassment. At a community level we have seen our alumni take actions against child marriages, undertake awareness campaigns against addiction and menstrual taboos and intervene in cases of domestic violence. 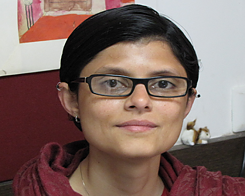 © ECF - Pune Christina Furtado (Executive Director, Equal Community Foundation) has been associated with Equal Community Foundation since 2015. She is passionate about ECF's mission to raise 'Every Boy in India to be Gender Equitable' and is currently focused on leading ECF's efforts to scale the approach of engaging boys in gender-transformative programmes across India.

Equal Community Foundation was established by Will Muir and Rujuta Teredesai in 2009 and has been implementing its flagship gender-transformative programme for boys, Action for Equality, in Pune, Maharashtra for the last 10 years. ECF has also built the capacity of over 50 organisations across India to implement similar programmes for boys, most recently having served as the technical capacity building partner for ICRW on their Gender Equality Movement in Schools programme in Rajasthan and UNESCO-India on their 'Transforming Men-talities' programme for CBSE school networks in India.

Prior to joining ECF, Christina earned her doctoral degree at the University of Illinois at Urbana-Champaign and has held positions in academic administration at Brown University, Rhode Island and FLAME University, India.