Theatre & Performance
The gender of nature

During the first performance as an actor in a play called Images of Feminity at Max Muller Bhavan, I was throwing balloons out of my blouse to the audience. It was more than just fun for a sixteen year old, more than she would realise it at that age. It was haunting, and thus began the game of altering myself through performed roles.

The performer holds the ability to transport an individual audience into parallel reality full of wonder where one can experience the essence of one’s own consciousness and is able to reflect on spiritual and moral questions.

It is important to challenge the definition of theatre with constant experimentation of aesthetics, performance style and language. I developed a wish to break down the social, racial and gender barriers to create something that is undeniably humane.

Here, I realised masculinity is something that is not natural but a social construct and millions of years of human history created a certain sets of behaviours for different sets of species. The study of these behaviours becomes very crucial in understanding how the mind and body co-relations work within different cultures. It is not as immediate or as far as we can remember individually - rather, a collective memory of people who can’t pin point exactly when and how they started to behave in a certain way, or react in a certain manner the way they do at a certain time. Being an actor my investigation is often to trace these answers through the extra lives I get to live.

The more I connect with my young students, I find them less rigid if a task of altering their cisgender (from birth) is assigned. It was not possible until a few decades ago to hear any criticism of the very fact how male children are taught “Boys don’t cry.” The parallels of this are endless but the reality of these popular sayings are often not true. I have seen men cry, I have seen men fail but what I have also seen is that, they don’t have the permission to express failure (unless they are intoxicated or are mentally present in another’s story) they love to find an excuse to hide under defence and that’s a military training regime that is biologically fed to our neurological system.

Now though it is not as simple as I am striving to keep it a scientific matter, I must explain why, I have seen many women being violent too and committing crimes. But the way they are both redeemed is different. There lies the difference which made me zoom out my vision a bit beyond what my environment was imposing upon me. In life however being flexible is often an advantage over being rigid.

If we can scan these codified behaviours closely we find it to be all controlled by a tiny part in our brain predominantly, it is known as the amygdala and when we get benumbed in fear, that state is known as an "amygdala hijack". This happens because we were not born bipedal but quadrupedal and this has dominantly made us behave against our natural state.

If we are to talk about masculinity, or about the larger subject of gender, we ought to embrace a worldview that is not restricted merely to humans. If we look at the biological world of mammals, insects, birds and micro-organisms we find that gender is not a binary phenomena, but a continuous spectrum of behaviours that blend into each other.

Furthermore, in certain invertebrates like snails and earthworms, hermaphroditism is a natural condition where either partner can act as male or female.

According to recent studies, “The percentage of animal species that are hermaphroditic is about 5% in all animal species, or 33% excluding insects. Most hermaphroditic species exhibit some degree of self-fertilization. The distribution of self-fertilization rates among animals is similar to that of plants, suggesting that similar processes are operating to direct the evolution of selfing in animals and plants…”
Therefore neither by birth (cisgender) or natural law can it be said that gender is not a flexible condition of being. My personal experiences and expressed emotions started to become the bedrock of every role I was playing. And I wasn’t always playing my cisgender.

Lina Öhlund writes that, “Gen Z, more than any other generation before them are rejecting traditional gender stereotypes. According to a recent study 50 percent of millennials consider gender to be a spectrum, and that some people fall outside of conventional male/female categories.”

This is a clear and present shift towards “gender agnosticism”, which seems to be the natural state of things in the biological world.

During my last directorial work, Sambhar Project 2020 - I tried to depict an apocalyptic tale of climate change, mass deaths, migration and the history of evolution. It was inspired by the tragic death of 20,000-40,000 migratory birds at the Sambhar Lake in Rajasthan due to microbiological changes in the lake’s water, which the birds drank every year. Only this time, it left them paralytic until they died.

Two months later, the thousands of avian caracasses soon became a prophetic omen of the global coronavirus pandemic to strike human civilization with a force unknown to living generations. I tried to use what happened to the birds as a metaphor for what is happening to humanity, and in fact - male and female actors were used to depict the birds in a movement theatre performance, using elements from folk tales, folk music, a scene from the Mahabharata and Japanese Butoh. The reason Butoh was used is because I wanted to explore the movement of a disabled body. My exposure to Kabuki training and Butoh practices has helped me create the climax of this theatre film where the god Krishna is cursed to die by Gandhari.

What I experienced deeply while making this film was the utter loss of gender as the entire focus shifted on a specie-threatening plague. It made me think deeply about evolution and our relationship with other species, and about ancient species that are now completely extinct, like the bird archeopteryx, depicted by me in the film.

My style of work as an actor is to understand more profoundly how to apply my traditional training of the craft into this modern era of filmmaking. The challenge is to find a methodology which stays relevant when human interaction with machines is overtaking the need of interaction with nature. The traces from old rituals and traditional art are getting increasingly hidden into the debris of migration and war against nature.

It is impossible to ignore that the narratives are constantly clashing. I am using various psycho-physical exercises to enable the body and mind to withstand the experience of scripted life and imagine a behavior that does not necessarily become a repetition of my personal behavioral pattern.

And these behavioural micro-gestures that are a body-language can be altered or developed through training the body and our nervous system, just like an actor does. In that context, I am currently exploring the representation of “the failed man”, including various social diseases like alcoholism, petty crime, gambling, mental health and stigmas surrounding these men. This is a work in progress.

These are facets that have been explored previously in my work like The Field by Sandhya Suri.

Related to the above themes, I am also working on a new media project based on Red Oleander (Rakto Korobi), the one act play written by Nobel laureate Rabindranath Tagore. It explores the similarities and dissimilarities between lives Here (Urban) and There (Rural). Since human experiences are universal, so are the elements of human emotions. Labour displacement, masculinity and existentialism are the core subjects of this project. 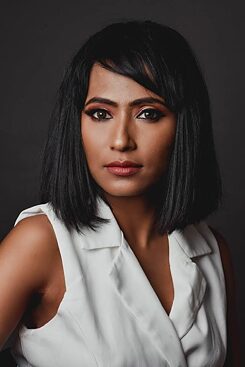 © Mia Maelzer (private) Mia Maelzer is an international stage and film actor born to a Nepali mother and a Bengali father living in India. Her work is showcasing at The Criterion Collection. The National School of Drama alma is best known for the TIFF18 award-winning film "THE FIELD". The work also got nominated at the prestigious BAFTA and Sundance followed by IFFLA winning the grand jury award 2019. She directed her first international theatre documentary film Sambhar Project 2020 that has showcased from IFFSA, Toronto worldwide.

Mia is internationally developing her own pedagogy of acting in Asia forming her own body of performance art work as Play-Lab South Asia.​