IN MY TIME OF DYING by Sankar Venkateswaran & Leon Pfannenmüller

In My Time of Dying (IM TOD) is a theatre piece set during a pandemic, a project by Leon Pfannenmüller (Germany) and Sankar Venkateswaran (India) that works dynamically both in physical space and as an ongoing conversation in a virtual space. It aims to search for dialogue grounded on the most basic common denominator of our conditio humana: the fact of facing death and a finite time alive. How do we die? How do we prepare for that? How do we deal with dying bodies? And after dying? 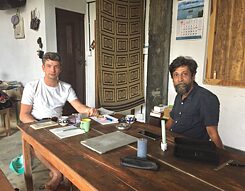 © 2022 Im Tod. Theaterhaus Jena/Theatre RAW/Goethe-Institut In My Time of Dying is about a life changing encounter between two theatre makers. Both the process and the staging will follow the principle of dialogue, while the lines between autobiographical facts and fiction may well get blurred. On stage, the performers recollect about their personal associations with death, they talk from lived experience, share stories and perspectives, act out scenes from plays they have done in the past or plays which famously stage death or dying. They draw on personal reflections, misunderstandings and shared concerns. They present excerpts from expert interviews with doctors, caregivers, undertakers, and physicists, covering topics ranging from western science to philosophical ideas on matter, life and death. They discuss questions about palliative care, the needs of a dying person, and how death is dealt with in non-western and indigenous cultures. 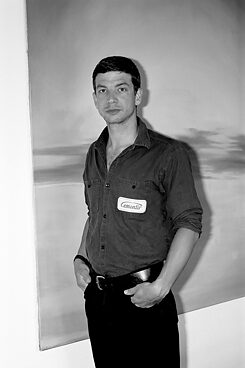 © Flavio Karrer Leon Pfannenmüller is an actor and theatre director. Born in Nuremberg, Bavaria, he studied acting at the Academy for Performing Arts in Ludwigsburg. He played at theatres across Germany, Italy and the Netherlands, such as Thalia Theater in Hamburg, Frascati Amsterdam, and Ver- einigte Buhnen Bozen.

In 2012, he staged "Das Totenfest" based on a novel by Jean Genet as part of the celebrations for Charles De Gaulle in Ludwigsburg. Between 2012 and 2017, Leon was a member of the ensemble of Munchner Volkstheater. There he initiated and directed the thematic event series "Die grosse Schau" (The Great Show). Also at Munchner Volkstheater he worked on a musical stage adaptation of Eduard Limonow's novel "Fuck off, Amerika", which was invited to the Kaltstart Festival in Hamburg.

He has produced several essayistic short films for the online magazine Telepolis. In 2020 he directed the short film “Very Important: This Is About Theatre” in collaboration with video artist Thomas Taube.

In 2019/20, he was a member of the ensemble of Theater am Neu-markt, Zurich. Since 2018/19, he has been working on various projects at Theaterhaus Jena as well as with the Dutch theatre collective Wunderbaum. 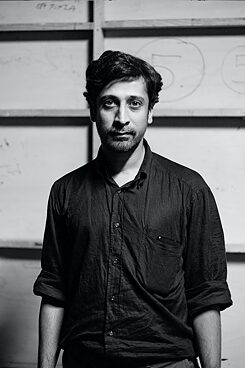 © Gabriela Neeb Sankar Venkateswaran is a theatre director from India. He lives and works from Sahyande Theatre, a theatredwelling he built in the mountain valley of Attappadi, Kerala.

He studied directing at the School of Drama and Fine Arts, University of Calicut, after which he trained at the Theatre Training and Research Programme in Singapore. In 2007, he founded Theatre Roots & Wings, and directed Richard Murphet’s “Quick Death” (2007), “Sahyande Makan-The Elephant Project” (2008), Ohta Shogo’s “Water Station” (2011), “101 Lullabies” (2012) and Henrik Ibsen’s “When We Dead Awaken” (2012).

In 2013 Sankar received the Ibsen Scholarship from Teater Ibsen, Norway, for ‘Tribal Ibsen Project’ which furthered his work with the indigenous people in Attappadi. His following works, “Criminal Tribes Act” (2017) and “Indian Rope Trick” (2020) reflect the shift in Venkateswaran’s working context. His works have been presented at various venues and festivals such as Zürcher Theater Spektakel, Kyoto Experiment, Zoukak Sidewalks in Beirut, Theater Commons Tokyo, and Spielart Theaterfestival Munich.
Alongside his work with the company, Venkateswaran directed a number of works as a guest director for various institutions such as Anton Chekhov’s “Seagull” (2011), Maurice Maeterlinck’s “Interior” (2020) for NINASAM, Heggodu, India, Bhasa’s “Urubhangam” (2011) for Shinshu University, Japan and “When We Dead Awaken” (2018) for Intercultural Theatre Institute, Singapore.

Sankar directed “Tage der Dunkelheit” (2016) in 2015/16, followed by “INDIKA” in 2016/17 at Münchner Volkstheater. He served as the artistic director for the International Theatre Festival of Kerala in 2015 and 2016 and was the jury member for Zurich Theater Spektakel 2016.

Leon and Sankar previously worked together for the creation of “Tage der Dunkelheit” at Münchner Volkstheater and have since continued their exchange about theatre-making and other shared interests. Leon visited Sankar at Sahyande Theatre in Attappady, Kerala, in 2019.

Note from Sankar Venkateswaran
"Since the early days of the pandemic, Leon Pfannenmuller and me met online several times and reflected on the impacts of the pandemic on performing arts, and discussed the changing circumstances to which we were seeking ways to adapt our own individual practices. From our discussions we have two questions that we ask ourselves in relation to our work, especially in Attappadi, and in the context of the pandemic: what is the role of theatre during this particular time? and where do we locate theatre?

For the first question, we find it urgent to address the specific topic of ‘death’ – not only in relation to the pandemic, but also death induced by clinical depression, suicides, Werther effect (copycat suicides), and the combined impact of these on people who are disconnected and isolated, especially in rural areas such as Attappadi. We have conceived ways to use theatre as a tool to bring people together, reclaim the common spaces and work towards filling the gaps and erasing the distances that were created among people due to the pandemic as well as the way it was handled, especially in the context of India.

The second question leads us to renewing our approach to theatre practice, audience as well as architecture of theatre itself. We felt the need to take theatre outside of buildings and extend our activities safely into different corners of civil society, such as in schools, police stations, and healthcare centres etc, in order to reach out to as many people as possible. The genesis of the project can be traced to these thoughts that came out of our discussions.

In this light, we planned to create and tour a small-scale theatre production in Attappadi and also beyond, with the help of a portable seating and simple technical set up that will allow us to transform open air spaces into pandemic-safe performing spaces. Apart from the exchanges that happen in India, we also plan to show the piece in Jena and try to find other venues in Switzerland and the Netherlands."

A co-production of Theaterhaus Jena and Sahyande Theatre in cooperation with Acteursgroep Wunderbaum, In My Time of Dying will premier on March 31, 2022 at Theaterhaus Jena, Germany.

This project has been developed with the support of the International Coproduction Fund of the Goethe-Institut.
About the Performance