A panel discussion with Hemavathy Guha and four speakers from varying backgrounds including printmaking, radio and anthropology to dissect what 'traffic' means in tandem with or absence of the traffic policeman on the road.

Through this project, Hemavathy attempted to trace the trajectory of traffic policemen who stand in the middle of a road and direct ceaseless and reckless traffic. We pay them a cursory glance and tolerate them as beings to be tolerated. Yet at times, without these people, there would be mayhem on the roads.

How does it feel to be in the middle of the road for hours together in hot and humid or cold, chilly weather?
What facilities are being given to them considering that they are constantly exposed to air pollution?

These are some of the questions that Hemavathy hoped to find answers for through her and others interactions with them.

Hemavathy hoped these interactions would turn into a mode of conscious engagement leading into new forms of artistic and intellectual work. Prior to the pandemic and subsequent lockdown, she had visited various traffic intersections, trying to understand the nature of the occupation and hazards involved. She wrote a series of blogs in social media on Tracing the Trajectory of Traffic Police which have gone beyond her original vision to include several other people’s works. 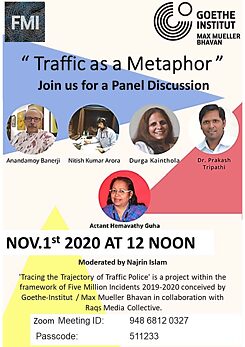