In this essay series, we have gotten to know Leipzig photographer Edgar Leciejewski as a critical observer and creator, a meticulous archivist, an eager collaborator, and a shape-shifting multimedia artist. Now we hear from Leciejewski himself on being home and away, inhabiting analog and digital worlds, and why he has always wanted to work with children.

Edgar, the photo series dine & dash we have been talking about in our Custom Culture essay series is literally close to home—situated inside and outside your studio at Spinnerei Leipzig. But you have created anywhere from Toronto to New York City to Vietnam. What is the appeal of working farther afield?

To work far afield means entering and experiencing a new country, another language, and, importantly, new people—all of which feeds my curiosity. Usually, when I live abroad, I do not even notice that I am working. On Canada’s Fogo Island for example, a curator came up to me three months into my residency and asked whether I would like to exhibit a sculpture I had made. Only then did I realize I had created a new body of works. Before that intervention, I more had a feeling of just being there, inhabiting that new place. The one constant that travels with me though is my body and my perception of the world. Just like in my Leipzig Polaroid series dine & dash, there’s an inside and an outside view: Looking back “in” from abroad, you get a different feel for how lucky we are in Germany. 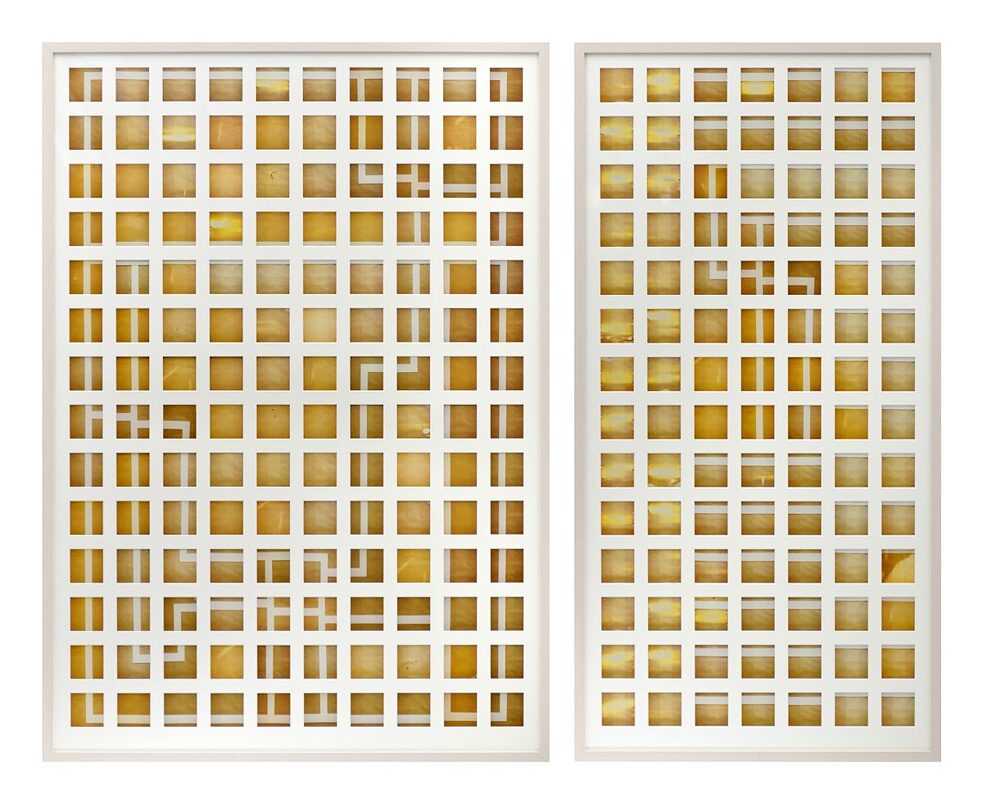 Phileas Fogg & Passepartout, 2011, 229 Polaroids © Edgar Leciejewski Speaking of travelling the world while staying in one place, tell us something about the Polaroid work Phileas Fogg, which formally alludes to the earlier dine & dash series in its systematic but modular and “puzzle-ing" grid structure but depicts a different subject matter, color scheme…

Phileas Fogg & Passepartout is a work showing mat cardboard I photographed. I then framed those photos again under mat cardboard and arranged them to create an unreal new meta-passe-partout structure. Some Polaroids show flies, some show sunny flashes. The work itself is a journey and an adventure for the eyes, just like “Around the World in Eighty Days.”

dine & dash and Phileas Fogg are abstract and formally fairly through-composed series, but you are also a passionate and playful portrait photographer. I was lucky to see your show Encounter with Texan artist Amy Blakemore at Museum der Bildenden Künste Leipzig in 2018, which included vibrant portraits of children you met in the USA. Why kids and how did you work with them?

To work with preschool children for the first time was just a gift, I always wanted to photograph kids. Children’s portraiture used to be its own field in art history. With the invention of photography, it became a theme within family photography. For Encounter, I asked myself what a photographic portrait would look like that matches the self-image of the child. So these images show a life-sized photographic portrait, and overlaid on top I printed their drawn self-portrait onto the frame’s glass. That way, both impressions, both images—my perspective and theirs—come together. I had also asked each of them to bring a piece of clothing of their choice, a garment they feel connected to, they like, that has meaning or a story. And to leave that with me to integrate into the frame-making of their multi-layered portraits. I heard from one child that when they received a copy of my/their work, they were jumping around with excitement. I hope to still exhibit these images in Houston where I took them. To picture children, to me, is to picture the future. 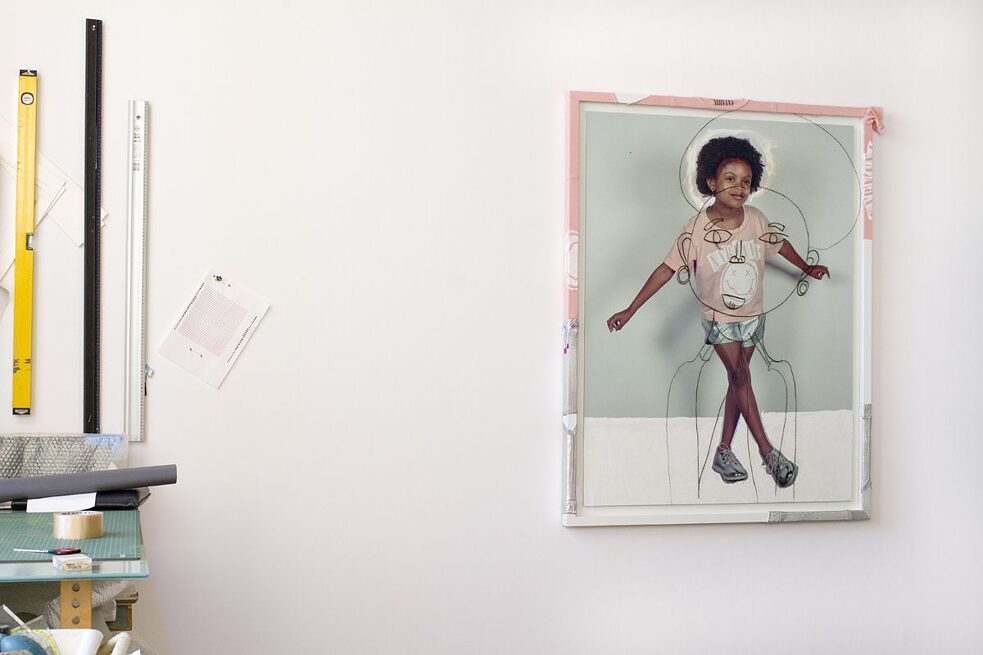 Kenzie Jeahnne Townsend from Encounter 2018 © Edgar Leciejewski
“Through photography, I can escape into reality,” you once said. When you spent time in Toronto, you took me and our audience on an urban photo walk to the grave of Canadian hockey (and coffee) icon Tim Horton for example. What does the exploration of a “real” environment you find yourself in and the “icons” that inhabit these environments mean to you as an artist?

If I am in a new city or landscape, I want to know about its history. Often that happens through a place's “icons.” As they shape our understanding of ourselves, they act as a foil. They help me “characterize” a place, a situation. From 2013 to 2015 I spent a fair amount of time in Canada and everywhere you go you see the Tim Hortons coffee chain, and literally everyone goes there. Stumbling across the grave of founder Tim Horton on the outskirts of Canada’s biggest city (unbeknownst to most citizens) and learning about his wild biography from hockey icon to entrepreneur to his drug problems made me picture the suburban Canadian streets I was walking through a different, shifted lens.

I’m already overwhelmed by the question… When the lock-down started I was in Switzerland with my partner. All of a sudden, the Western world stood still. Partly, I loved that new state, that sudden calmness and privacy that descended on all of us. Our fast and furious approach to and perception of time paused for a second. I am not a fan of everything apparently needing to be digital in the arts world, I very much need analog ways to experience art. Social media for example just take time away from seeing the real world (which is important for a photographer, I believe). I might be old school in these questions, and sure, I use digital photography and digital tools to structure my work and thinking. But even when my work is produced with digital tools or comes out of the digital world, it’s still analog in its perception and reception.

I am currently working on a series of politicians kissing—a very analog human act—and what I just said holds true for that new work as well. I think pictures are a communication tool and they can indeed say more than words—they can create worlds. 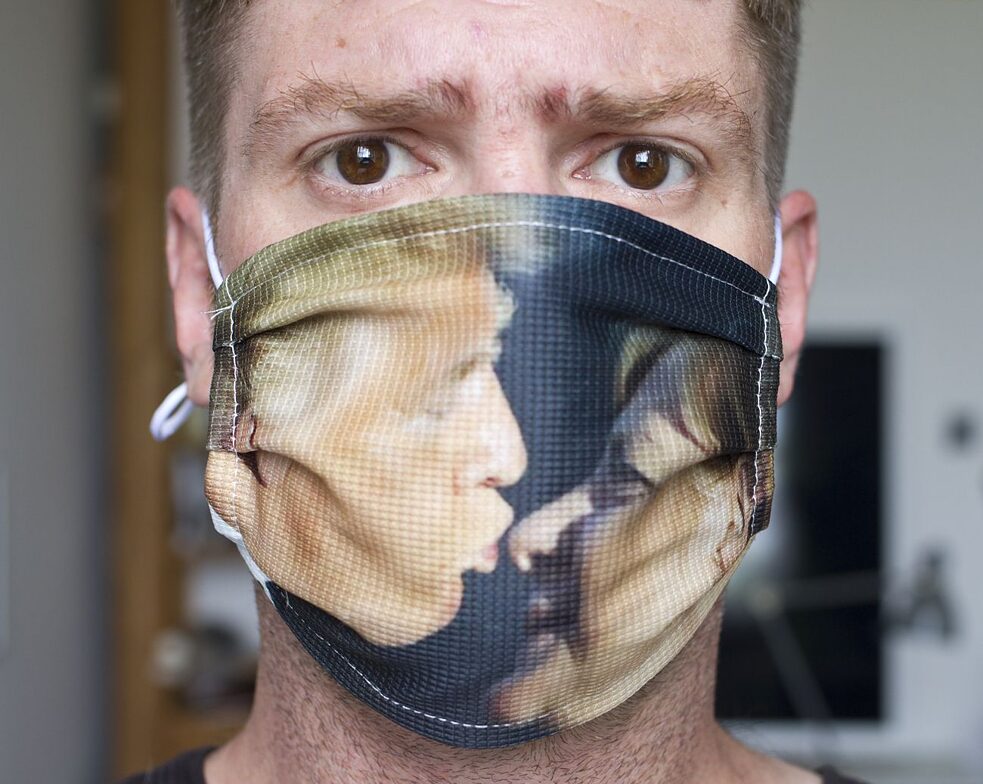 Politicians Kissing © Edgar Leciejewski In the upcoming final instalments of our series about and inspired by Edgar Leciejewski’s bildarchive art book, we will turn the tables and you into artists: We will look at the (art) history of the flip book and get crafty with our own moving image books.