Jackie Smith has been chosen to receive the 2021 Helen & Kurt Wolff Translator's Prize by a jury of five for her translation of Judith Schalansky's novel An Inventory of Losses, published by New Directions Publishing in 2020. The honor will presented to her by David Gill, the Consul General of Germany, at an award ceremony at the Goethe-Institut New York on June 24, 2021.

The jury for the Helen & Kurt Wolff Translator's Prize is excited to award the prize for 2021 to Jackie Smith for her translation of An Inventory of Losses by Judith Schalansky, published by New Directions. Kirkus Reviews described the book as "an exploration of extinct animals and objects told through dazzling stories that question the bounds of memory and myth," and Jackie Smith's rendering into English is no less dazzling.

Schalansky's genre-bending (or blending) text roams across time and space in twelve chapters whose identical lengths belie their tremendous diversity of subject matter, as they transport us from an island that disappeared into the South Pacific all the way to the moon, from ancient Greece to present-day Germany – and beyond. One of the many extraordinary features of Schalansky's writing is to equip each episode with its own distinct narration, and the resultant voices are every bit as wide-ranging as the tales they tell.

Jackie Smith's translation follows this back-to-the future slalom with remarkable grace and agility, brilliantly capturing the musicality of the original text, its philosophical depths, psychological insights, meticulous scientific observations—as well as its playful ingenuity and deeply poetic imagination. In fact a catalogue of these achievements might properly be construed as an "Inventory of Gains."

The jury is also pleased to note how many fine translations were submitted for consideration: we would be delighted if readers would explore the remaining 30 titles, and would once again especially like to commend the three other translations that constituted our shortlist. 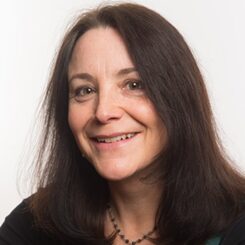 © Patrick Bennett Jackie Smith studied Modern Languages (German and French) at Cambridge University. She worked as a commercial translator, including several years at a German bank, before venturing into book translation. She translates fiction and non-fiction, and in 2017 was the winner of the Austrian Cultural Forum London Translation Prize. Her translation of Judith Schalansky’s An Inventory of Losses, which is her first full-length literary translation, has been longlisted for the International Booker Prize 2021.