This is the third chapter in Assaf Evron’s photographic interventions in Mies van der Rohe buildings. Following the McCormick House and the Esplanade Apartments, Evron will install a 650 sq/ft photograph of the Vermillion Cliffs (AZ) on the southern face of S.R Crown Hall. This intervention is based on speculative paper collages made by Mies from the late 30’s and on. In these collages, Mies used landscape photographs to demonstrate the function of windows and how they frame nature. Using Mies’ strategy of collage, Evron applies photographs onto Van der Rohe’s buildings: representation of architecture collapses into the actual architecture, nature and architecture are welded into a surface.
This project is supported by IIT School of Architecture, Goethe-Institut Chicago, Artis and the Ruttenberg 52’ Collection. 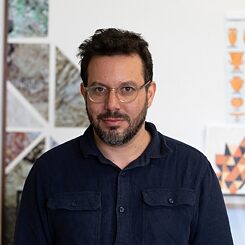 (c) Assaf Evron Assaf Evron is an artist and a photographer based in Chicago. His work investigates the nature of vision and how it reflects in socially constructed structures. Evron applies photographic thinking to a variety of two and three-dimensional media. Looking at moments along the histories of modernism Evron questions the construction of individual and collective identities, immigration (of people, ideas, images) and the representations of democracy.
Assaf’s work has been exhibited in galleries and museums nationally and internationally; The Museum for Contemporary Art in Chicago, Crystal Bridges Museum for American Art and The Israel Museum in Jerusalem among others.  Evron holds an MA from The Cohn Institute for the History and Philosophy of Science and Ideas at Tel-Aviv University as well as an MFA from the School of the Art Institute of Chicago (SAIC), where he currently teaches.

Price: Free and Open to the Public