Monika Wulfers uses impressive light installations to define space. She works with lines and numbers in a variety of media, most recently neon. Abstract components of space are two-dimensionally described, while arbitrary gesture and capricious “design“ are eliminated. All components of the space are thus integrated, defined, and activated in their entirety. Her work is reminiscent of works by Oscar Schlemmer, one of the great early Bauhaus artists, especially his Triadic Ballet. (1922) 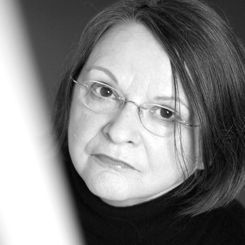 © Mieke Zuiderweg Born in Berlin, Monika Wulfers works and lives in Chicago. She earned a BA in Philosophy from North Central College, Naperville, and an MFA from the School of the Art Institute of Chicago where she studied film under Stan Brakhage and painting under Ray Yoshida and Ted Halkin.
She made significant contributions in art and technology and advanced the use if the computer as artistic medium. Recent light sculptures, paintings, and drawings parallel mathematical systems she uses in her work with computers. Random lines convey dynamic movement and are based on connecting the interior spaces of a given number of outlines and the resulting generation of space defining number systems.
Her work has been shown in museums in the US, and internationally, and is included in the permanent collections of the Elmhurst Art Museum, DePaul University, Wilhelm-Hack-Museum, Argonne National Laboratory, Museum of Contemporary Art, Chicago, as well as numerous private collections.