I first learned the word "white supremacy" in 2015. For the past 6 years, I have experienced microaggressions on a daily basis, countless deaths of people of color, and protests about these topics. As a queer Asian artist, who emigrated to the States to have more freedom in my life, I am still learning the true meaning of freedom in relation to current racial politics. The meaning of “white supremacy” has grown bigger since residing in the United States, becoming a reality for me. By deconstructing and reassembling the text printed on the American flag alongside the national anthem, I intend to show the flipside of the ordinary object, charged with big concepts like national identity and political belief.

Flags will be published on January 07. 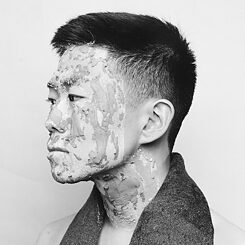 © Sungjae Lee Sungjae Lee (he/they) is a Seoul-born, Chicago-based artist who makes performance, installation, text, video, and sound. He received his B.F.A. in Sculpture from Seoul National University in 2014, during which time he discovered his deep interest in immaterial and time-based mediums to represent the voices of marginalized groups. To further develop his practice as a performance artist, he pursued his M.F.A. in Performance Art at the School of the Art Institute of Chicago and graduated in 2019. Throughout his residing in the US, his practice has centered on the need for visibility and representation of queer Asians in a Western context. His work has been presented globally in Korea, Sweden, Canada, New Zealand, and the US.

Next: Aram Atamian: In One of the Seven
Back to the overview