Read our book of the month and join us for a discussion online! Simply register via Eventbrite to receive the Zoom access info. Let's keep reading and sharing experiences with the material! ​

The book club is free and open to everyone interested, but participants must purchase the individual texts themselves and are expected to have read the title to be discussed prior to the meeting.

Feel free to read the October selection in English or German; the discussion will be in English.

Registration About the novel: 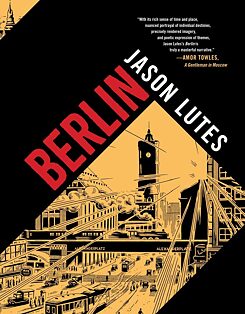 © Drawn and Quarterly During the past two decades, Jason Lutes has quietly created one of the masterworks of the graphic novel golden age. Berlin is one of the high-water marks of the medium: rich in its well-researched historical detail, compassionate in its character studies, and as timely as ever in its depiction of a society slowly awakening to the stranglehold of fascism.

Berlin is an intricate look at the fall of the Weimar Republic through the eyes of its citizens―Marthe Müller, a young woman escaping the memory of a brother killed in World War I, Kurt Severing, an idealistic journalist losing faith in the printed word as fascism and extremism take hold; the Brauns, a family torn apart by poverty and politics. Lutes weaves these characters’ lives into the larger fabric of a city slowly ripping apart.

The city itself is the central protagonist in this historical fiction. Lavish salons, crumbling sidewalks, dusty attics, and train stations: all these places come alive in Lutes’ masterful hand. Weimar Berlin was the world’s metropolis, where intellectualism, creativity, and sensuous liberal values thrived, and Lutes maps its tragic, inevitable decline. Devastatingly relevant and beautifully told, Berlin is one of the great epics of the comics medium.

Jason Lutes was born in New Jersey in 1967 and graduated from the Rhode Island School of Design with a BFA in Illustration in 1991. After graduating he moved to Seattle, where he spent several years working as a dishwasher and assistant art director at Fantagraphics Books. His big break came in 1993, when he began drawing a weekly comics page called "Jar of Fools" for The Stranger, Seattle's alternative paper. By 1995 he had become the paper's art director, and in 1996 he left The Stranger and made the leap to becoming a full-time cartoonist.

Lutes currently lives in Vermont with his partner and two children, where he teaches comics at the Center for Cartoon Studies.

Berlin was critically acclaimed and selected as one of the best books of 2018 by numerous organizations and publications, including The Washington Post, The Guardian, The New York Times, and the New York Public Library.